K'naan shows up at Junos on way to World Cup

"Geez men, I'm really honoured by this," a slight, 31-year-old man with a large poetic  vision, said upon winning the biggest award at the Junos.  That man spent the early years of his life avoiding death and listening to the hip hip records sent to him from America by his father, who had fled the country. Named artist of the year at the Juno Gala Dinner and Awards, K'naan whose real name is Keinan Abdi Warsame, defeated Michael Buble, Diana Krall, Jann Arden and Johnny Reid and solidified his iconic stature,an immigrant who taught himself English only to become one of its most gifted poets.

As inevitable as his victory seemed last night, with his hit "Wavin' Flag" chosen as the official ballad of the World Cup,  it is chapter in a story of such epic fairytale proportions that it is also almost unbelievable.  "I wrote a lot about those experiences as a form of therapy. They were the kinds of songs that I had to get out," K'naan told Vanity Fair magazine last March.  In the article, Bill Bradley wrote that if you haven't heard of K'NAAN yet, you will "...by July 11, when the last two teams battle it out for the FIFA World Cup Trophy at Soccer City in Johannesberg, South Africa.  K'naan’s infectious anthem, “Wavin’ Flag” is the official Coca-Cola anthem for the 2010 World Cup."

Bradley described K'naan as both iconic and humble and at the Junos, K'Naan demonstrated he is both.

"I came to Canada awhen I was about 24, 15 year old...and I didn't really know what I was going to do to deal with my emotions and my past and my life," he said.  "Writing songs was just what I did to survive."

"When he was 13," his entry in Wikipedia says, "K'naan, his mother, and his two siblings, older brother, Libann, and younger sister Sagal were able to leave their homeland and join relatives in Harlem, where they stayed briefly before moving to the Toronto, Ontario neighbourhood of Rexdale  , where there was a large Somali Canadian community.   His family still lives there. In his new country, K'naan began learning English, some through hip hop albums by artists like Nas and Rakim. Despite the fact that he could not speak English, the young K'naan taught himself hip hop and rap diction, copying the lyrics and style phonetically. He then also began rapping.  He dropped out of school in grade ten to travel for a time, rapping at open mic events, and eventually returned to Toronto."

I was lucky enough to see K'Nann when he appeared at the Orpheum Theatre as part of the Cultural Olympiad.  His stage presence is remarkable.  His determination to make sure the audience understands his lyrics distinguished him.  He stopped the music on several occasions to slowly go through they lyrics.... sad, touching, historical, inspiring, and always deeply moving.

Once he was sure that the audience got it, the band joined in, the pace picked up, and K'Naan's clear, pure voice filled the theatre, infusing the crowd with a sense of celebration and euphoria.

Most of the prizes were handed out ahead of the televised bash.

In Somali, his name means "Traveler," CBC reported in May or 2009.  K'naan's appearance at the Junos was a detour from a journey towards the World Cup.  CBC reported last week that K'naan would be following the cup all the way to South Africa and blogging about his journey.   In the blog post on his web site he speaks of being "stunned" by the beauty of the architecture in Rome.  "To see Rome is to see history."

The 2010 celebrations in St. John’s  mark the 39th anniversary of the JUNO Awards and the 9th telecast with broadcast partner CTV.

The JUNO Awards has evolved from an industry awards event to a week long festival which travels city to city across the country. It encompasses both public-facing fan events and industry/networking opportunities featuring a diverse array of Canadian artists and emerging talent. 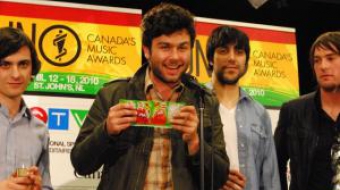 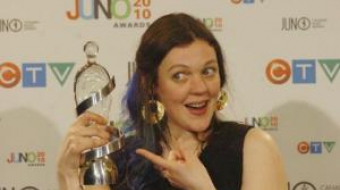 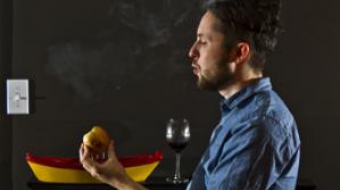