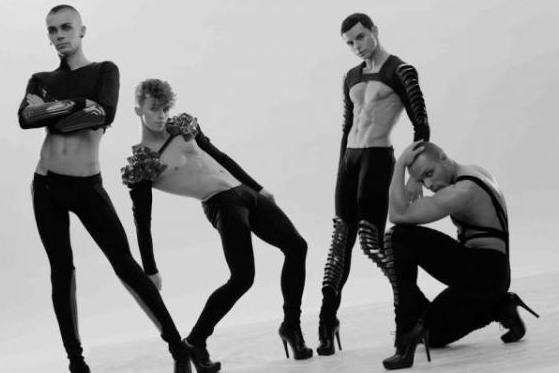 Kazaky, the popular boys in heels from the Ukraine, is rumoured to be in Madonna's "Girls Gone Wild" video, which premieres worldwide tomorrow.

Kazaky, an all-male Ukrainian dance group that has taken Europe by storm, appeared with Madonna in her new Girls Gone Wild video, set for release on March 20.

Poise, elegance, and high heels aren't typically words associated with men. But Kazaky, a Ukrainian sensation that debuted in 2010, is anything but typical. Strutting in sky-high stilettos, these men show the best display of dancing in stiletto heels since Beyonce’s "Single Ladies" (which they cover, by the way). Besides rebelling against gender norms, Kazaky's fame continues to grow because of their distinctive choreography by group founder Oleg Zhezhel, danceable songs, and showmanship.

Artur (Art) Gaspar, Oleg Zhezhel, Kyryll Fedorenko and Francesco Borgato (who replaced Stas Pavlov last fall) compose this Ukrainian all male dancing group whose popularity has evolved worldwide, particularly after their viral video for "Love," a track that has also debuted as the track for the new Viktor & Rolf fragrance, "Spicebomb." In February, dancer @HelloJonte tweeted that Kazaky may be making an appearance in an  Madonna video. They were there, but somewhat under-exposed in the dance routines.

Kazaky are more notable for their dramatic techno beats, tiny outfits and dance moves than for their singing. As the European studs make their mark on North America, you can't help but wonder if their next appearance will be within Lady Gaga's social circle, given their frequent appearance at Gay Pride events around the world.

Anne Giardini: Be as intelligent as you are

Lady Gaga feels like a "loser kid in high school"