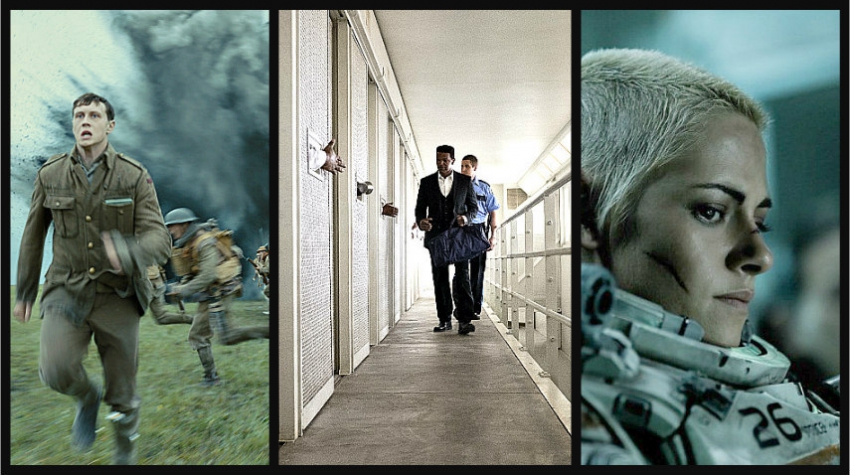 With two big wins at the Golden Globes, 1917 is now the one to beat at the Academy Awards, where the nominations are to be announced Monday. It won Best Film (drama) and Best Director and leads my reviews today.

It’s a strong line up (mostly).

The Invisible Life of Eurídice Gusmão: 4

And the Birds Rained Down: 3 ½

1917: Simply one of the best war movies ever made. It’s tense, action-filled and heroic but entirely on a personal level, thanks in part to a technique that some have called a conceit but actually pulls you along relentlessly and puts you right into the action. Two British soldiers in World War One have to make their way through the trenches, across bombed-out no man’s land and through shattered towns and farms to warn a brigade commander to call off an attack because the Germans have an ambush planned. It’s a potential suicide mission and we’re with them as they avoid booby traps and a dive-bombing plane, survive a collapsing tunnel, jump into a swollen river and make their way past human bodies and rats. 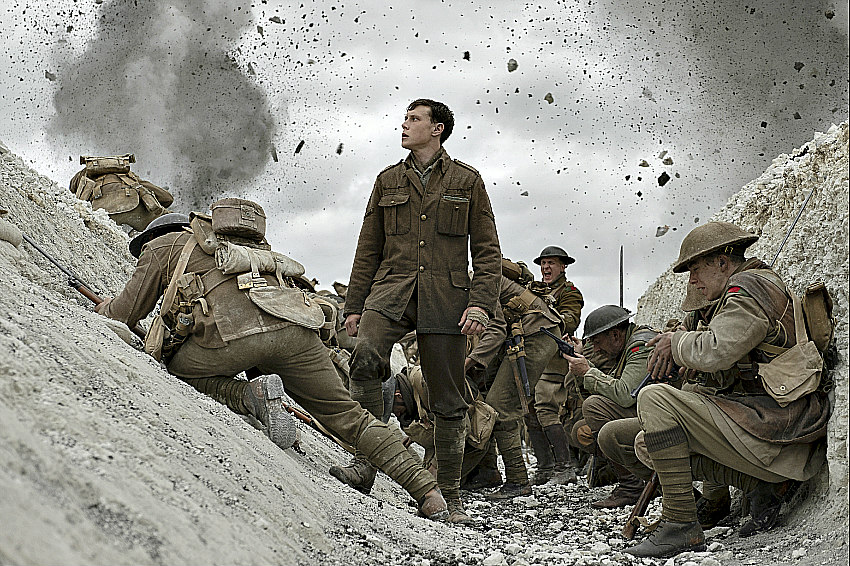 The film presents all this in what looks like one continuous sequence, no edits apparently (though not really). It took months of rehearsal, a new small camera, expert cinematography by a master, Roger Deakins, and precise direction by Sam Mendes to achieve that. It’s not a gimmick. It’s immersive. You really do feel what it must have been like to go through war perils like these. Mendes is telling real stories he heard from his grandfather and he’s showing them from the viewpoint of two regular blokes. George MacKay plays a corporal already sick of war and Dean-Charles Chapman (known from “Game of Thrones”) is the still-eager younger one. Officers, played by big names like Mark Strong, Andrew Scott, Richard Madden, Colin Firth, and Benedict Cumberbatch, are merely cameos. The focus is squarely on the heroic contributions of ordinary soldiers. It’s not only a thrill ride; it’s an act of respect. (Scotiabank, Park, Marine Gateway and suburban theatres) 4 ½ out of 5

JUST MERCY: There are people (I was talking to one just the other day) who are tired of all these films we’ve been getting from the U.S. about legal injustices to blacks. I say while the problem goes on, the films should too. This one is a true story and quotes a startling statistic: one of every nine prisoners who die by capital punishment, have been wrongly convicted. Many of those are black and that’s a leftover from slavery. The film is not subtle in making points like that by dramatizing a case in Alabama back in 1987. 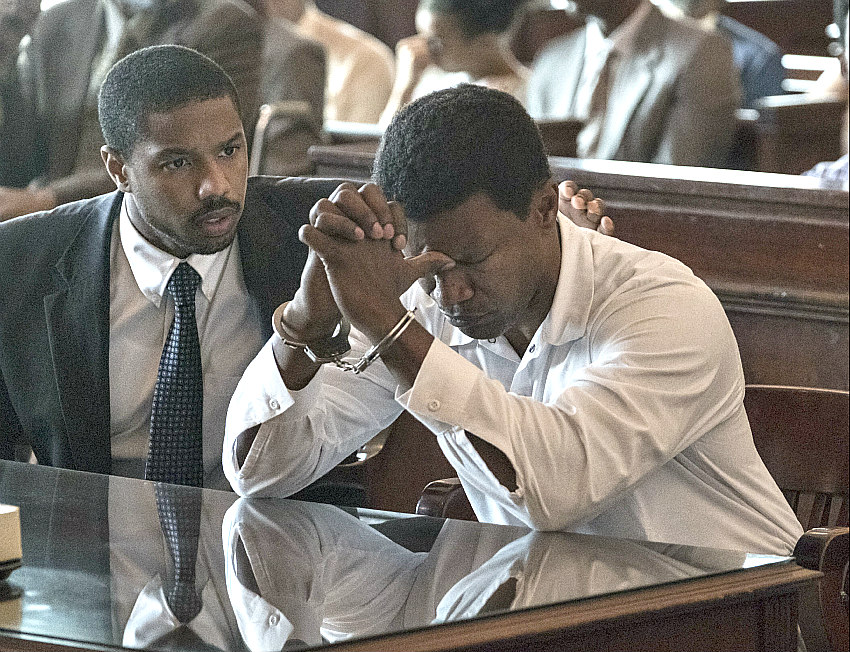 Jamie Foxx plays a man on death row for the murder an 18-year-old girl. Problem is: he wasn’t anywhere nearby the day of the killing and the “eye-witness” couldn’t be right in identifying him. But try to get the authorities to re-think the speedy conviction. Michael B. Jordan plays the lawyer who tries, Bryan Stevenson, who came from up north as an intern to work with The Southern Prisoners Defense Committee. This is just one of over 100 cases he’s worked on; it was even featured on 60 Minutes. The film has exactly what you’d expect—abusive cops, no-sympathy sheriffs, angry citizens—but a few surprises too. The points it makes are obvious but so are the facts. “You’re guilty from the moment you’re born,” Foxx says in one of his scenes. Fine acting by the two leads, and Brie Larson and Tim Blake Nelson in support, and strong direction by Destin Daniel Cretton elevate this film. It’s about a crusading lawyer, but more about exposing the issues. (International Village and suburban theatres) 3 ½ out of 5

UNDERWATER: It’s something of a mystery. How could a story with so much promise become a movie this boring? I think it’s because the director, William Eubank, and his writers aren’t bothering to speak to us.They’re so wrapped up in putting in visions of technology that they don’t make it mean much to us, and in fact leave us at sea and uninvolved the whole way. There are also a couple of environmental comments in some vague hope of making this film mean something. It doesn’t though, since they’re unexplored. 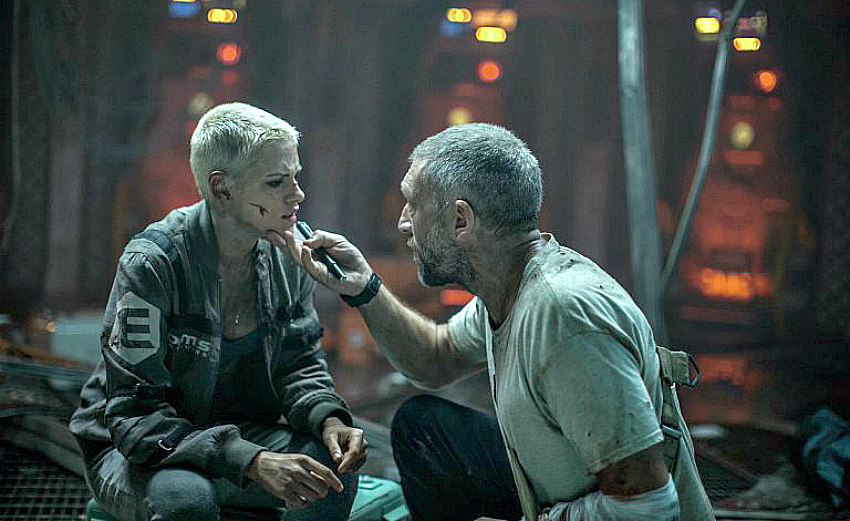 Kirsten Stewart is the star, seriously out of the depths she’s found in her recent films, as a science officer in a deep ocean drilling facility. (“We shouldn’t be down here,” says another character). There’s a leak in the ceiling, clunks and bangs hitting from the outside and a hallway collapse. Kirsten, plus a worker pulled out from under some concrete chunks (T.J. Miller), a tough captain (Vincent Cassel) and others put on giant suits like spacemen wear to walk the ocean floor to a giant drill. How that will save them we’re not told, but it hardly matters because a giant creature that looks like a cross between an octopus and a squid with very sharp teeth shows up. The film turns into a survival epic (though there’s not much surviving going on). It’s all murky rather than exciting, and surprisingly short of suspense. 20th Century Fox made it three years ago and let it sit. Disney, which bought the company, is clearing out the overmatter. (International Village and suburban theatres) 1 ½ out of 5