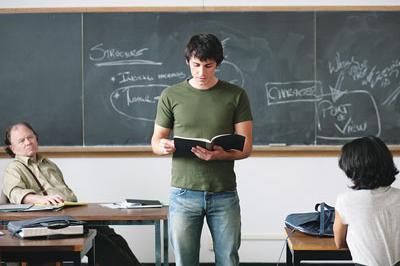 You could try a genuine BC story today at the Vancouver International Film Festival.

Here are my best suggestions for now and the next few days. I've seen them all. Several have their final screening today.

Please check back now and then. The list changes every day as titles that finish their run drop off and others debut.

COLE: This is the fourth year in a row that local director Carl Bessai has had a film at VIFF.

As usual it's well-made and acted and shows off BC beautifully (he's also the cinematographer).

It's doesn't match the emotional power though, of Mothers and Daughters, his award winner from last year. And one incident goes right off the credibility scale. Cole (played by Richard de Klerk) lives in Lytton with his sister and her abusive boyfriend. He wants out. His ticket is a creative writing class at UBC where he also meets and falls for a young woman from West Van (Kandyse McClure). That small town vs city theme is familiar but works nicely, at least until the boyfriend gets going. (Also Day 9)

SWEET CRUDE: This film will remind you why some people boycott Shell. In Nigeria's Niger Delta, a people's movement has been fighting that oil company, and others, for over 10 years. As one speaker says, “It's a time bomb.” Some very articulate activists show off poor villages and polluted rivers to explain their demands. Others, fed up with talk that doesn't produce, are into sabotage and kidnapping, which spikes oil prices and brings on retaliatory killings by the national army. This tough, thorough and passionate film is by a Seattle documentary maker who gets quite a bit more involved than journalists usually do. (Also Days 9 and 13)

IT MIGHT GET LOUD: What do you get when you arrange a summit of three great guitar players? That's Jimmy Page, The Edge and Jack White? You get a lot of talk, that's what. And a serviceable but not spectacular version of The Weight. You know, the Band classic? “Take a load off Annie.” The talk is fascinating, mind you, sprinkled with both trivia and musical philosophy. White champions roots music, The Edge shows off his technology and Page has clips and pictures from what must be every band he's ever been in.

HOMEGROWN: A lot of people these days have taken up growing a few vegetables in their backyard or on their balcony. They'd be really inspired by the family in this film. On one lot, in the shadow of a freeway in Pasadena, California, they grow over 6,000 pounds a year, feed themselves, sell to restaurants and teach others. Jules Dervaes and his three grown children call it urban homesteading, take us on a tour and in a light chatty tone explain what they've learned about people and the land.

THE GIRL: Through most of this film from Sweden, you're on the edge of your seat fearing that something awful is bound to be coming. A girl, just under 10-years-old, has been left alone at home. Her parents are off to Africa and her babysitter aunt is on a date that seems to last all summer. Watching the youngster fend for herself, deal with shopping and swimming classes, hiding her predicament from nosy visitors and most of all overcoming a persistent phobia makes for a quite endearing little movie. Credit yet another very good child actress.

LET'S MAKE MONEY: This may be the hardest-hitting of the money documentaries at the festival. It's a smartly-argued attack on globalization, the World Bank, The International Monetary Fund and finally, but not least, tax havens. Those little places like Jersey, Guernsey and The Cayman Islands where, the film says, over 11 trillion dollars of private wealth is now held. There's lots more: bullying third world nations, ousting Saddam Hussein, overbuilding on the Costa del Sol and even why Americans now own Vienna's streetcars.

THE DAMNED RAIN: This is a strong piece of fiction from India about a real emergency. Many farmers burdened with debts, drought and weak harvests have been committing suicide. After a village funeral, one farmer's wife fears her husband may be next. She has her son watch and report. Pitiless moneylenders, official corruption, rains that turn into destructive floods are part of this bleak and apparently authentic story.

We Live in Public

Who Do You Love