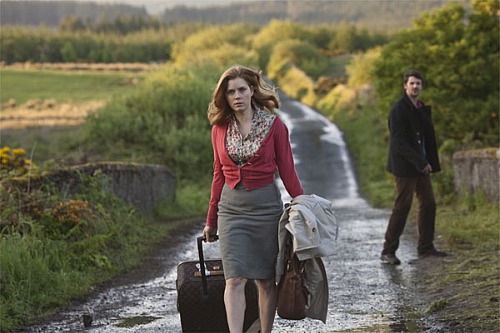 In the mood for a pleasant romantic comedy? Amy Adams has one for you. Michael Cera tries.

And for big laughs try the Yes Men. They deliver outrageously. You can also start the new year with vampires, a political rant, a sitcom pioneer or a Bollywood star.

LEAP YEAR: Romantic comedies have had a bad time of it lately. Here’s a good one due almost single-handedly to a sparkling performance by the charming Amy Adams. She’s anxious to get married and schemes to follow her cardiologist boyfriend from Boston to Ireland where she’s told that on Feb. 29 women can pop the question. (Feminist this film is not). All the usual set backs get in her way, a diverted plane, a missed train, a muddy slide down a hill and, naturally, a handsome Irish innkeeper (Matthew Goode). Formulaic? Sure but also a pleasant, underplayed comedy with gorgeous scenery and even a couple of surprise twists. (Tinseltown, Criterion White Rock, Grande Surrey and several area Cineplex theatres). 3 ½ out of 5

YOUTH IN REVOLT: Michael Cera is after something more basic than marriage in this romantic comedy. He just wants to lose his virginity. He’s a smart, witty California kid who proclaims: “I have no life” while his separated parents are getting it on, his father (Steve Buscemi) with a bikini bimbo and his mother with a truck driver (Zach Galifianakis, of The Hangover). Michael’s soulmate could be the intelligent young woman (Portia Doubleday) who he meets in an RV park.

She’s into French films so he imagines a bad boy named Francois giving him direct, go-get-her advice. Cera also plays him, sporting a small mustache, smoking many cigarettes and offering a temporary break from his usual self-conscious character. The humor is hit-and-miss hip and ironic  and a few too many low-life types plus Justin Long getting everybody stoned on mushrooms lower the tone considerably. (At 9 Cineplex and the Grande Surrey theatres). 2 ½ out of 5

DAYBREAKERS: The first horror film of the decade is getting good notices in some quarters. Not here. The Australian brothers, Michael and Peter Spierig have conjured up great atmosphere (a rainy, concrete city), attracted known actors (Ethan Hawke, Sam Neill, Willem Dafoe) and spun an intriguing variation on the vampire story. Then they collapse it all into mere blood and guts territory. They particularly like exploding bodies. The time is 10 years from now. Vampires are in the majority. They work in offices and laboratories and farm humans for their blood. Supplies are running low and work on a substitute is failing. Hawke switches sides and joins a band of humans who may have a solution. There are obvious but only fleeting echoes of real issues like peak oil, class warfare and corporate greed. A lot of mangled bodies, though. (At Cineplex Theatres all over). 2 ½ out of 5

THE YES MEN FIX THE WORLD: This one is worth mentioning again because it continues at the Vancity Theatre through next week and because it is so good. People with an anarchistic streak will especially like it. These are the men who embarrased Canada in Copenhagen last month with a fake press release. They set up fake websites, appear at conferences and issue statements to expose corporate and government failures. This second compilation of their exploits starts right off with their greatest.