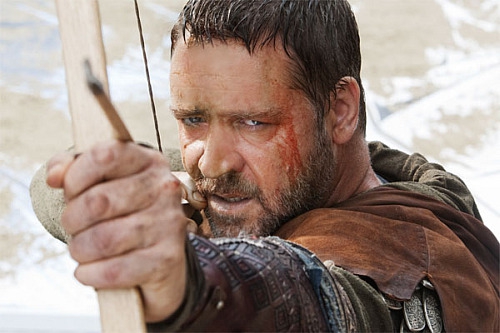 The ancient legend of Robin Hood is back again. Well, at least the story before the familiar legend, as told by Russell Crowe and Ridley Scott in their 5th film together. Amanda Seyfried and Queen Latifah both have their own romantic story and two films ponder Communism.

ROBIN HOOD: A little more merry-making would have helped this film immeasurably. As it is, it’s leaden and serious, ponderous with weighty matters, and not very buoyant with adventure. The film purports to tell the origin of Robin Hood, before he set up camp in Sherwood Forest. He was an archer in King Richard’s crusade, saw him die and assumed a noble’s identity to return home to England. It is good so far but the film soon gets muddled.

Robin pretends to be Lady Marian’s husband, a chemistry-challenged arrangement. King John levies new taxes; the barons draw up an early draft of what may be the Magna Carta; and, traitors work for the French who eventually invade. Battle scenes are grandly staged and then become hard to follow because of the editing, although most of the film is visually marvelous. There are four Academy Award winners responsible for this. Russell Crowe is repeating his brooding Gladiator performance, with Ridley Scott directing again. Cate Blanchett is a feisty Marian and the script is by Brian Helgeland, who besides L.A. Confidential, has A Knight’s Tale on his resume. Helgeland again plays loose with history and worse. He fails to explain the importance of the developments he’s written in. We’re told, but we don’t feel what the characters are fighting for. It’s hard to become attached to them, except, that is, for Mark Strong as a traitor, Oscar Isaac as a sniveling King John and Max von Sydow as a dignified Locksley, pretending Robin is his son.
(The Ridge, Oakridge, Scotiabank, Van East, and 10 suburban theatres) 2 1/2 out of 5.

THE TROTSKY: The kids are rebelling, just like in Footloose or Rock and Roll High School  but with far loftier goals. They want student power and a union, and they’re organized by a firebrand teen who thinks he’s the reincarnation of Leon Trotsky. Really. He expects to achieve a socialist utopia and later, like the Russian revolutionary, to be assassinated. From that warped story line springs this surprisingly funny and politically smart film set in Montreal, starring hometown boy Jay Baruchel. (His growing Hollywood credits include the lead voice in How to Train Your Dragon).

Here he is wide-eyed, forceful, awkward and insolent, but still likeable, facing down an unctuous principal (Colm Feore) or arguing with Genevieve Bujold as the chair of the J. Parizeau school board. The film delights in Canadian references like that. A TV interview with Ben Mulroney refers to his father. There’s a Rene Levesque mask worn at a party. It doesn’t all work and could be shorter but does make for a breezy comedy driven by ideas.
(5th Avenue, Tinseltown, Coquitlam) 3 ½ out of 5

MAO’S LAST DANCER: There are some truly spectacular dance sequences in this fact-based story of a Chinese dancer who grew to like Texas better than Beijing.