A fine conclusion to the Toy Story saga, Jonah Hex from the comics and fumbling for sex in Year of the Carnivore 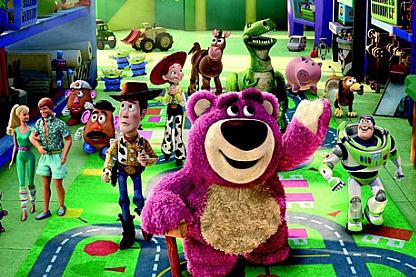 There are excellent children’s films out there. The final Toy Story is here with all our old friends, several new characters and some big time adventure.

TOY STORY 3: A wonderful ending to a brilliant trilogy. And again it’s not just for kids. Sprinkled in among the antics of Woody and Buzz and the other toys coming alive exactly as children imagine them, there are lots of bits for adults. Barbie, for instance, is suddenly moved to recite one of the main principles of democracy. It’s a priceless miniature and a very funny surprise. And yet it fits. There are no jarring scraps that break the flow of the story. Or disturb our attachment to these characters. This time they have to deal with some huge emotional issues that were only briefly addressed in Part 2: abandonment and worse. Andy is off to college; his toys (after a brief encounter with a garbage truck) are sent to a daycare centre where a kindly teddy bear and his aide, a Ken doll, welcome them. The promise is they’ll always have children to play with them. It doesn’t turn out to be the heaven they expect though. The tots are rough and the bear is bitter. He’s running a prison with nighttime trucks on patrol, a monkey at the security monitors and a Big Baby acting spooky. The film turns into a large scale adventure when the toys try to escape and have to dodge bigger terrors in the town dump. There’s a lot of heart and a great deal of fun; excellent animation and 3-D that doesn’t add much except to make the images darker. Tom Hanks, Tim Allen, Joan Cusack and most of the voices are back, with strong additions: Michael Keaton as Ken and Ned Beatty as Lots-o, the bear. (At theatres all over, including The Park, Dunbar, Dolphin and Tinseltown). 4 out of 5

YEAR OF THE CARNIVORE: If you’ve ever listened to Sook-Yin Lee hosting CBC Radio’s Definitely Not the Opera you know her style: quirky, confident, just this side of ironic. That’s exactly the tone she’s written and directed into her first movie. It’s not surprising that she says it draws on feelings and even incidents from her own growing-up years, here in B.C.

JONAH HEX: This modern-day western does one thing right. It matches the look and feel of the comic book and graphic novel series it comes from: the weird exaggerated angles, the high contrast stark colors and the explosive action, as well as the frequent blood splattering. Other than that there’s not much that you’ll remember for very long. Good thing it’s over fast.

Josh Brolin plays the embittered Confederate soldier turned bounty hunter who roams the West as sort of a good Samaritan. John Malkovich is even more embittered and a resolutely bad guy. He’s plotting to fire a powerful new weapon on the US Capitol. In a flashback we see he also mutilated Hex by applying a branding iron to his cheek. Odd that, because in the comic books, that was done by an Indian chief. Even odder, there’s a supernatural element in that Hex brings two characters (briefly) and himself back from the dead. Megan Fox is photogenic but not that much more alive as a prostitute. (Tinseltown and several suburban theatres) 1½ out of 5

Best among these just might be the WORLD CUP soccer. The 11:15 a.m. games on both Saturday and Sunday will be on the big screen. Last week, Robert Green’s bobbling mistake in the English goal was high drama, drawing major gasps from us watching it in that 32-foot wide picture.

ICONS AMONG US: JAZZ IN THE PRESENT TENSE (Saturday 7:30) shows established stars like Herbie Hancock, Wayne Shorter, and Wynton Marsalis and emerging artists like Aaron Parks, Tineke Postma and Robert Glasper to attest that music is constantly renewing itself. This is a four-part TV series edited into a feature and serves as a scene setter for the upcoming jazz festival.

GLOBAL LENS FESTIVAL: Ten films from around the world display how cinema can unite. A San Francisco-based group called Global Film Initiative chose them for their strong local voice but universal themes. SHIRLEY ADAMS, a big award winner from South Africa kicks off the series today and repeats on four more days. It’s a scorching drama about a mother in Cape Town struggling to care for her son rendered a paraplegic in a drive-by shooting.

There’s lots more info on them all at http://www.viff.org/theatre/

RUSH: BEYOND THE LIGHTED STAGE: The documentary about Toronto's biggest rock band, and at four decades, one of the longest lasting, was booked for just one night recently. It's back for a whole week at the Granville Theatre. Two fans, Scot McFadyen and Victoria-raised Sam Dunn, created the film after their recent successes documenting the world of heavy metal music.

Rush is known for long, often intellectual explorations with tunes like Tom Sawyer and an Ayn Rand influence in some of their lyrics but the film also brings out the humerous side of the three members. Geddy Lee, Alex Lifeson and Neil Peart talk about their 40 year evolution from a geeky high school combo to a powerhouse band that has sold 40 million records. Peart also talks about two tragedies that almost shut the band down, the death of both his wife and daughter. Jack Black and others add their often enthusiastic words about Rush. (Granville Theatre)

NOTE: These images are supplied by the movie studios and are therefore the exclusive property of their copyright owners.