Salt and L’Affaire Farewell both feature Russian spies. Solitary Man and I Am Love both have characters straying off course. 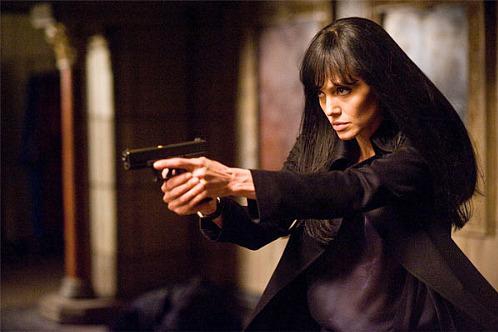 Your choices comes in two’s this week. You can watch Angelina Jolie’s take on Russian spies in Salt or get far more accurate  in L’Affaire Farewell. You can watch Tilda Swinton or Michael Douglas show off their best acting and their wandering moral compass in I Am Love or Solitary Man.

SALT: A few weeks ago, I wouldn’t have given this film any credence at all. Then the news broke. A Russian spy ring was discovered operating in the United States. This film has that, and more. Sleeper agents hiding in the U.S. ready to strike when ordered. Atomic weapons will be used, millions will die and, as one character proclaims, “Russia will rise from the ashes.”  Wild fiction, bad take on reality. The Soviet Union has been gone for 21 years and this film is trying to start the cold war all over again. It even blames the Soviets for killing Kennedy. Odd to see Angelina Jolie, a United Nations envoy in her other life, involved in something like this.

She plays Evelyn Salt, a CIA agent accused of being a Russian spy. She runs of course, setting in motion a series of action thrills, gun battles in elevators, smashed police cars, an SUV dive on to a taxi and a highlight sequence that has her fall off a highway overpass on to a transport truck, jump onto another one and then on to a third, and finally hijacking a speeding motorcycle and getting away. It’s fun that way, despite the ridiculous story that also has the Russian president assassinated in New York and a plot on the life of the US president. (He’s white, by the way). Jolie handles herself well in the action scenes.  Liev Schreiber and Chiwetel Ejiofor play the agents chasing her with a lot of high tech gadgetry and firepower to back them up. (5th Avenue, Scotiabank, Oakridge and suburban theatres). 3 out of 5

FAREWELL (L’AFFAIRE FAREWELL): If Salt has the action side of spy movies, this French film has the more accurate side. Spies work with documents and information. Their adventures are mostly cerebral.

This is a true but little-known story that changed the world.  In the early 1980s, a KGB colonel played by Emir Kusturica (that’s him on the right) started feeding information to the Americans because he wanted to bring down Brezhnev’s stagnant form of Communism.  He used an “amateur” as a conduit, a French engineer working in Moscow,  played by   Guillaume Canet (he’s on the left).  He was given the code name “Farewell”  to deceive the KGB. The information got to Francois Mitterand and on to a wary Ronald Reagan, played a bit awkwardly by Fred Ward. It was good though, and with details of radar locations, White House codes and eventually a list of names, revealed a large Soviet spy ring operating in the United States. It emboldened Reagan, caused Gorbachev to re-think his strategy and led to the eventual collapse of the Soviet Union.  The story is fascinating and anchored by solid, natural acting by Canet and Kusturica, both directors, by the way. Much of the film is procedural, some parts are clumsy and only a few sequences build much suspense. What it does succeed at is displaying the effect on the two men’s families. There’s rancor in both; infidelity in one and fear-driven conflict in the other. Then an extra level of deception makes for a chilling ending. It seems credible. (There’s also Russian and English spoken in this final film in the Ridge Theatre’s French film festival).  2 ½ out of 5

SOLITARY MAN: He's played flawed characters in Wall Street, Wonder Boys, Fatal Attraction and  Basic Instinct. Now Michael Douglas brings us another memorable one. He's a narcissist,  a skirt chaser and a car dealer. He’s more vulnerable than the others as signaled in the very first scene by a doctor’s grim concern about some heart problems. When we meet him again six year later, he’s lost his business, is rebuffed at every turn to start up again and is reduced to borrowing from his daughter. He’s still a fast-talking charmer, though, keeping up pretenses and advising a college student to see “nothing but possibilities.”  Okay, so he blames his arriving late to his grandson’s birthday party on a business meeting when really he had slept in after a one-night stand. And he also beds the daughter of his new woman friend. How can we not hate a guy like that? Oddly we don’t, in fact we’re fascinated thanks to an ingratiating performance by Douglas.