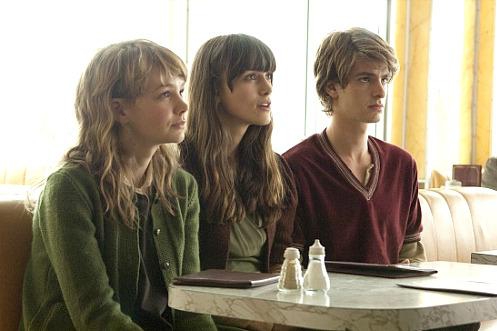 Never Let Me Go has three of England’s top young stars and a science fiction story set in the present. Legend of the Guardians has a kid’s story that adults will like too and Wall Street: Money Never Sleeps revisits but fails to match an original.

NEVER LET ME GO: What does it mean to be human? That’s the weighty theme of this somewhat science fiction film based on the acclaimed novel by Kazuo Ishiguro. (He also wrote Remains of the Day). There’s nothing leaden about the film’s approach to the theme, though. It’s emotionally engaging and wonderfully acted and that overrides both the melancholy tone and some improbabilities in the story. Carey Mulligan, Andrew Garfield and Keira Knightley play students at a special boarding school in the English countryside. The film very early on reveals something the novel holds on to much longer. They’re clones, being raised to provide organs for transplants. The story then focuses on how they interact with people around them and how they deal with their fate. One thing they don’t do is resist, although they’ve heard rumors of a potential deferment and seek it out. They also fall in love which makes their fate all the more sad.

It’s beautifully photographed and hypnotic in its pace. The excellent cast also includes Charlotte Rampling and Sally Hawkins. The director, Mark Romanek, is a veteran of music videos (including Johnny Cash’s Hurt) and made one previous movie, the very good but little-known One-Hour Photo. (5th Avenue Cinemas) 4 out of 5

LEGEND OF THE GUARDIANS: THE OWLS OF GA'HOOLE: Here's another animated film you can put into the excellent category. And there's a rare extra. The 3D version is actually worth seeking out. Time and again there are deep vistas like in Avatar. There's also a strong echo of Lord of the Rings  both in mammoth action scenes and voice work by some of the same actors. The only caution I have is, don't bring the little kids. They won't be able to get into the complex story.

The film is based on the first three books of a 15-volume series by Kathryn Lasky. Her world is populated by owls, the good ones with caring families (even a brother helping his sister) and the bad ones who stage what look like fascist rallies. When two brothers end up among these so-called "Pure Ones", they're targetted for a form of re-programming. One buys the ideology and stays; the other sets out to find the owls called Guardians, that he's heard about only in stories. There's adventure on the way, new friends, rain and snow storms, an edge-of-your-seat chase and ultimately a giant battle all superbly computer drawn.The director, Zack Snyder,  is known for heavy action films like 300 and Watchmen. Here he's made a kid-friendly film that also appeals to adults. Helen Mirren and Geoffrey Rush are among the bigger names in the voice cast which includes many with Australian accents. The film is also playing in 2D and 3D Imax version. (Oakridge, Tinseltown, suburban theatres). 4 out of 5

WALL STREET: MONEY NEVER SLEEPS: I can see what Shia LaBeouf  meant when he said Oliver Stone has gone mushy. We simply expect more fireworks from the director of Platoon, JFK, Born on the 4th of July and, of course, Wall Street, where he skewered the “greed is good” crowd. Today, with the world still reeling from the meltdown that crowd brought on, Stone merely lobs a few spoken attacks and lingers instead on a dysfunctional family tale. Gordon Gekko, who went to prison for insider trading in the first film and won Michael Douglas an Oscar, comes out of jail, writes a book (“Is Greed Good?”) and warns about the financial services industry (“The mother of all evil is speculation”). Yes. That’s what we’ve come for. We also get a fine scene at a Federal Reserve meeting but too little else on topic. We’re stuck with a mild love story between LaBeouf playing a junior stock trader and Carey Mulligan  as a writer on green issues. (It's her second film this week.) The thing is, she’s Gekko’s daughter and won’t have anything to do with him. LeBeouf does turn to him though, when the stocks fall, his mentor dies and Josh Brolin emerges as a new, less-slick, less-menacing villain. The acting and production values are top-notch but the film is muddled and actually drags in places, which you also wouldn’t expect. (Dunbar, Ridge, Oakridge, Van East, Tinseltown and suburban theatres)  3 out of 5