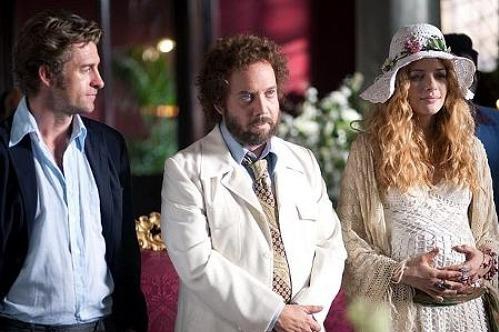 Barney's Version is the opening gala film at VIFF.

Good old word of mouth. In line ups and other gatherings, it’s the best pointer to the films you should see at VIFF. Better than the catalogue, which claims every film is great, and easier than hours of research on the internet.

You can read my picks right here, two days at a time. Generally, I’ll list only films I’ve seen and can recommend, although I’ll add a few now and then that I’m still only planning to see.

BARNEY’S VERSION: Mordecai Richler’s award-winning novel has been tweaked quite a bit for this movie version —no French-English arguments, for instance—but with The Habs, The Expos and Grumpy’s Bar all in evidence, the Montreal flavor is intact. So is Richler’s sardonic humor which comes on strongly early in the film. Later things get more serious. Barney you see is an ornery type, and Paul Giamatti plays him perfectly. As one character says to his face “you’ve screwed around everybody you ever met or cared about.”  He’s a TV producer and we see him looking back over his life. Flashbacks take us there, particularly the day he got married (to Minnie Driver) and immediately fell in love with another woman (Rosamund Pike). His messy love life and his drink-fueled friendship with a pal (Scott Speedman) take up most of the story, although a murder allegation floats in and out a few times and problems with a failing memory add pathos.  Dustin Hoffman brings humor and tidbits of fatherly advice. The film is glossy and well-acted but a might short of real emotional involvement. It screens again Sunday morning and opens in regular theatres in December. 3 1/2 out of 5

STONEWALL UPRISING: To this day, there’s a big sign outside the Stonewall Bar in New York City proclaiming “Where Pride Began.”  This sprightly documentary shows how it happened that one night in 1969 when the police staged yet another raid on the Greenwich Village gay bar, thepatrons fought back. Or as one says in the film” “We discovered a power we didn’t know we had.” A couple of days of riot followed and ultimately triggered the gay pride movement. People who were there, including one of the cops and a writer from The Village Voice, reconstruct the event in minute by minute detail and the context is set by some hilarious news and educational films about homosexuality. (Also screens Wednesday) 3 1/2 out of 5

PINK SARIS: “I am the messiah for women,” says a tough, firebrand named Sampat Pal Devi in a poor region of India. If you can get past the rather self-aggrandizing tone in that line, you can appreciate her good work in this bracing documentary. She’s the founder and leader of a militant group of women named The Gulabi Gang who stand up for abused, shunned, sometimes raped women. We see her help out five different women. One is being prevented from marrying outside her caste. Another lost her husband and then his family took her house. A young woman is frequently beaten by her in-laws.  Devi takes no guff, rarely even an explanation, when she confronts the wrong doers. We see her berating local police, family members and controlling husbands. At the same time, she’s struggling against problems of her own. It’s a fascinating peek inside a society that still exists in rural India. (Also screen October 12 and 14)  3 out of 5

VESPA: This charming story from Hungary, about a gypsy boy on a road trip, is meant to promote inclusion of the Roma people. That’s timely as countries like France have turned against them but this film stays away from overt political statements. It takes us into a child’s world, like the classic 400 Blows, and has us empathize.

Twelve-year-old Lali thinks he has won a scooter in a contest. To collect it he has to make a trip (by train, walking and hitchiking) to Budapest, about 70 kilometers away. He also hopes to find his dad who’s there working on a construction site. His quest is modestly presented, sometimes tense, sometimes funny, and very involving. The director, Diana Groo, has found a very natural and relaxed child actor in newcomer Sandor Toth. (Also screens Monday)  3 out of 5