Megamind, Due Date, Fair Game, Tamara Drewe, The Tempest, The Father of My Children, A Film Unfinished and Three Film Festivals 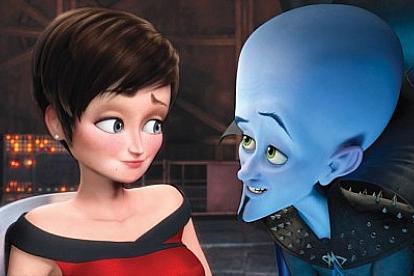 Tina Fey and Will Ferrell voice these characters in Megamind.

Two big Hollywood films occupy the top spots among the newcomers this week. But leave some time for three others too, Fair Game, The Tempest with Christopher Plummer and the French drama, The Father of My Children.

MEGAMIND: This film is dazzling, in the amazing animation, the 3D depth and the busy action sequences. Unfortunately it has almost no heart. Not like Despicable Me, which has lots of it, inside a somewhat similar story, delivered with art that’s just as flashy. Megamind assumes a more ironic tone as it takes the superhero myth and turns it upside down. It’s for teens and adults, and preferably comic book fans, not young kids.

Will Ferrell voices the super-villain of the title who defeats his smug and self-important nemesis (Brad Pitt) but finding himself without a purpose in life, trains a new superhero (Jonah Hill), only to see him turning bad, not good. There’s only one thing to do. Megamind has to turn good to fight the new bad. That role switching is intriguing for a while, and dexterously handled until it appears rather mechanical by the end. A second reversal has Megamind switching with a meek library worker (Ben Stiller) which leads to some sequences befitting a sit-com. There’s other silly fun along the way, including a Marlon Brando-Godfather imitation and a baddie’s mayhem to music by AC/DC. Tina Fey voices a skeptical TV news reporter. (Oakridge, Dunbar and many suburban theatres) 3 out of 5

DUE DATE: It doesn’t help at all that this is being compared to two other, much better films. Number one: The Hangover, the huge hit comedy also directed by Todd Phillips and better known as the movie that made Zach Galifianakis a star. It was boisterous and clever. Due Date is not. The other one is Planes, Trains and Automobiles in which Steve Martin and John Candy had to put up with each other on a trip home for Thanksgiving. This time, in pretty well the same story line but with little of the poignancy, we’ve got Robert Downey Jr. trying to get from Atlanta to Los Angeles, where his wife is about to give birth. He’s lost his wallet and luggage and landed on a no fly list thanks to hapless Zach. Naturally the mismatched pair are stuck travelling together.

Like any proper road trip movie, there’s one setback after another, including an unwitting detour into Mexico, crashing into a construction site, flipping off a bridge and an accidental gun shot in the leg. Downey is even beaten up by an Iraq war vet in a wheelchair. And for the cheap sentiment these movies also need, we have Zach bringing along his father’s ashes to spill into the Grand Canyon.  A lot of this is funny, and the two stars work well together, but over all, compared to its two antecedents, the movie is rather, as they say, lame. (Tinseltown and many suburban theatres) 2 ½ out of 5

FAIR GAME: This film is a bit low key but it’s valuable in one important respect. It’ll remind you of the lie that the U.S. used to invade Iraq; that Sadaam Hussein was trying to buy uranium from the African nation of Niger to develop a nuclear program. In other words, weapons of mass destruction. The film doesn’t get into where the rumor came from (an Italian newspaper, according to some reports) or the many times it was discredited only to re-appear and eventually get a key spot in a George Bush speech. It tells a personal story.

Naomi Watts plays Valerie Plame who became a pawn in the hot debate leading up to the war. (That’s the real Plame with Watts in that photo). She was publicly identified as a CIA agent, likely  by three White House officials (one of whom was convicted of perjury and obstruction of justice). The purpose was to get back at her husband Joseph Wilson, a former diplomat who went to Africa to check out the rumor, came back convinced it was wrong and wrote an op-ed piece for the New York Times saying so. Sean Penn plays him with blustery outrage. Watts conveys all the frustration you’d expect in a woman who’s had her career destroyed to push a wrong-headed scheme. No guns or car chases, but a thriller nonetheless, with lies, truth and character assassination battling it out. (Park Theatre, Tinseltown)   3 ½ out of 5

THE TEMPEST: Shakespeare’s last play has some of his best lines. The one about “strange bedfellows” for instance, or “What’s past is prologue.” This is a filmed record of the acclaimed production staged last year at the Stratford Festival in Ontario. Christopher Plummer gives an elegant performance as Prospero, the deposed duke who’s landed on an enchanted island with his daughter Miranda and dabbles in magic to feed his gnawing resentment. He keeps an “airy spirit” named Ariel (played with impish and scene-stealing delight by Julyana Soelistyo) under his control to work for him.