Country Strong, Season of the Witch and On Tour 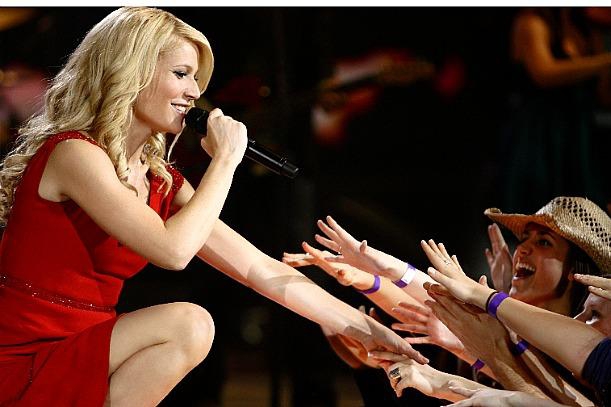 Gwyneth Paltrow heads up a short list of new movies this week with Country Strong. But can she sing?

It’s a slow start for new movies this first weekend of 2011. Only three films to talk about. Watch for 10 or so next Friday. In this edition, I cover:

Season of the Witch, 2 stars

COUNTRY STRONG: Compare this to last year’s country music movie and you can see much that’s been done wrong. Crazy Heart (with Jeff Bridges) had a bedrock authenticity about it. Country Strong is a soap opera. It feels made up; its plot lines complicate too conveniently and fragments of story (including a couple of genuinely human moments) float about loosely. Worst of all, a major revelation is made only with a magazine cover and then is so underplayed that we’re not sure what to make of it.

Gwyneth Paltrow plays a country music superstar, who is also an alcoholic, for reasons not made clear. She’s cheating on her manager husband (played by real country singer, Tim McGraw), is smitten with a singer friend and sometime rehab worker (Garrett Hedlund) and feeling threatened by a young woman (Leighton Meester) who is being groomed as a new star and described at one point as “like a country Barbie.”

There are multiple possibilities there and the film does seem to be trying to say something about the pressures of fame. It’s not clear what though. There aren’t many answers in the overly talky scenes we have to sit through. There’s little momentum in the story line and not much to care deeply about when it gets emotional. Even the songs are unexciting, tending to the singer-songwriter confessional side of the art form, even when they’re performed in honky tonks. Gwyneth does OK with her songs although she sounds more Joni Mitchell than Carrie, Reba or Trisha. (International Village and three suburban theatres) 2 1/2 out of 5

ON TOUR (TOURNÉE): There’s a lot left unexplained in this French road movie and that leaves a final impression that it’s rather slight. Still, it won the best director award at the Cannes Film Festival for Mathieu Amalric, who is also its star and co-writer. You’ll remember him from the last Bond film, where he was the villain, or from The Diving Bell and the Butterfly, in which he played the paralyzed magazine editor.

In this one, he’s an ex-TV producer who ran off to the United States and has returned with five “new burlesque” performers. He’s got them doing shows in harbor towns and promises the tour will climax in Paris. Unfortunately he can’t get a venue. He’s burned so many bridges that nobody will help. That includes his brother, a former boss and a former protégé who now calls him a scumbag. We never do find out why. Instead we get a parallel story line as he works to keep up morale leading the five dancers from one show to the next.

They’re a cheerful and chatty lot, all dancers in real life, including several who are rather plump which adds a strong vaudeville feel to their act. Chief among them is a blonde named Mimi Le Meaux who proves to be a natural actor and espouses a philosophy that they are “women doing shows as women for women.” That idea isn’t developed very far either. There are several witty digressions though, a couple of sex scenes, a little nudity and an over all amiable mood in a story about dealing with the setbacks life can bring. The dialogue is about half and half, English and French. (VanCity Theatre)  3 out of 5

SEASON OF THE WITCH: Connoisseurs of the very odd might enjoy this as a guilty pleasure. It starts well, builds atmosphere and something of a world view and then collapses into pure hokum. Even then, it carries some interest. I mean, where else do you get to see Nicolas Cage head butt the devil? Or hear a priest, when things get wild, spout the immortal line: “We’re going to need more holy water.”  Cage, you see, has deserted from the Crusades (it’s the 14th Century in Austria) and declares “I serve the church no more”. A spell in a dungeon changes his mind and he, along with a sidekick played by Ron Perlman, agrees to one last mission. They’re to transport a young woman and accused witch (Claire Foy) to a remote abbey six days away.

She’s thought to be causing the plague that has beset Europe. A good spiritual cleansing will put a stop to that. Cage doesn’t buy the theory and occasionally rants speeches like “A benevolent God would not ask such things of men.” But he does lead a small group and the prison wagon through fog, Wormwood Forest, a night-time attack by wolves, across a rickety suspension bridge and up into the mountains where in a monastery library the final dangers emerge. It’s pretty silly but not boring. There are real castles used as locations and the film, directed by a former cinematographer, looks great. Cage and Perlman talk American, not some East European accent, which will remind you of the adventures Hollywood used to turn out decades ago. (International Village and many suburban theatres). 2 out of 5

NOTE: The photos were supplied by the movie studios and are therefore the exclusive property of their copyright owners.