Justin Bieber, The Eagle, Gnomeo and Juliet, Just Go With It and two youthful visits to Europe 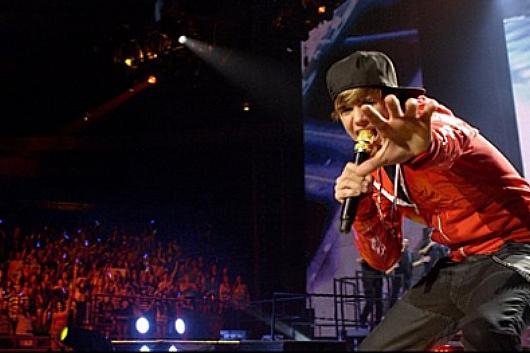 Justin Bieber draws the screams from the audience just like The Beatles, Elvis and a young Frank Sinatra used to.

The joys and trials of youth are a big theme at the movies this week. There’s Justin Bieber’s music, a popular adolescent novel in The Eagle, an old country trip in Modra and a sex theme in Attenberg. Plus young love animated for children (maybe) in Gnomeo & Juliet. Also watch for Adam Sandler’s new one.

Here’s this week’s line up:

From Prada to Nada --

This lively 3-D film makes clear that this is not just shrewd marketing of a pretty face to young girls. Watch the packed stadium singing along joyously with ''You smile, I smile,'' “One Less Lonely Girl” or his biggest hit, “Baby.” The kid’s got talent, writes bouncy infectious pop songs and can dance a bit. He advances a pre-sexual innocence, optimism and a can-do attitude, even a love of family, which has been rare in pop music ever since rock and roll came in over 50 years ago. His fans respond rapturously. They squeal to every soulful look he gives them. The film also tells his story one more time, through interviews, comments from his touring crew, including his vocal coach and his stylist, and lots of video clips from his precocious childhood. Only positive stuff, mind you. (Scotiabank, Oakridge and many suburban theatres). 4 out of 5

THE EAGLE: If you love to play with toy soldiers or watch directors march make-believe soldiers around, this film is for you. You get exciting, well-staged battles and an excursion into a no-civilized-man’s land to solve a mystery and repair a matter of honor. It comes from a 1954 novel, The Eagle of the 9th, by Rosemary Sutcliff, who has long been a favorite among adolescent boys for her historical fiction. The 9th was the Roman legion that disappeared in 140 AD in the highlands of Scotland. In this story, Channing Tatum plays the son of the man who commanded it. He goes north to find out what happened and to retrieve the “eagle,” the golden emblem that was lost. As one character explains, “Eagle lost. Honor lost.”  Honor, duty and fighting for freedom are given high, non-cynical importance in this film.

Tatum gets advice from an uncle, played by Donald Sutherland, and with a slave, played by Jamie Bell (best known for Billy Elliott) makes his way north of Hadrian’s Wall where it is said “No Roman can survive.” They meet (and later have to run from and ultimately fight) the highland tribes, depicted here more like aboriginal Mohawks than Picts. Tatum and Bell also have to switch roles (Tatum has to pretend he’s the slave) adding a few more themes to make this a thoughtful action film. It looks and plays nicely as long as you can overcome one unusual trait. The Romans speak pure North American, both in their accent and their speech patterns. It takes some getting used to. (International Village and many suburban theatres). 3 out of 5

GNOMEO & JULIET: It’s hard to know who this film is for. Since it’s animated and in 3-D, you’d think young children, but they wouldn’t get its playful divergence from Shakespeare’s play or how a nasty competition between two gardeners extends into conflict between their garden gnomes. People who do know Shakespeare might be offended with the outright war that develops. There’s even an atom bomb that goes off. And one gnome gets into an argument with the Bard himself, or at least his statue, calling for a happier ending to the story. So, it’s a few people in the middle who will be charmed by this goofy romance that refuses to be a tragedy.