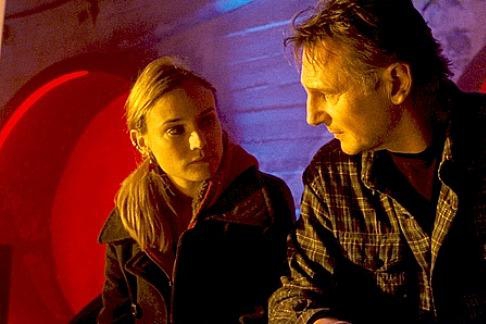 Liam Neeson and Diane Kruger are unlikely allies in Unknown.

Judging by this week’s movies you might want to be extra careful if you travel to Berlin or Cedar Rapids, Iowa. Just Look at what Liam Neeson and Ed Helms get up to in their new films. Two comedies, one from England, the other from Malaysia, deal with important matters and most of Canada’s 10 best get a special presentation.

UNKNOWN: No, it’s not Hitchcock but it’ll do for now. Not many can match the breathless suspense of the master’s best work. Still, this is a nifty paranoia thriller with an excellent cast and a good story that’ll keep you hanging on, even through some serious improbabilities and some lackluster direction. Liam Neeson stars as a scientist who arrives for a conference in Berlin along with his wife (January Jones, of TV’s Mad Men). A traffic accident and four days of coma later,  she claims she’s never seen him before. Security and her new man (Aidan Quinn) have him ejected from the hotel.

Thugs start chasing him. The one person who was there the day of the accident, a taxi driver played by Diane Kruger, won’t help (initially). A fellow scientist played by the fine German actor, Sebastian Koch, (star of the Oscar-winning The Lives of Others,) doesn’t know him. The only person willing to help is a former Stasi agent, now working freelance as a people-finder. Bruno Ganz plays him and steals the show in just a few short scenes. (He was Hitler in The Downfall  and in the many internet re-workings of his main speech in that film). The story complicates at every turn. There are three car chases, a rooftop escape, an assassination plot (complete with a countdown clock) and a twist revelation to keep you busy. Neeson is busy with another thriller filming right now in B.C., involving wolves. (The Ridge, Scotiabank and many suburban theatres). 3 ½ out of 5

CEDAR RAPIDS: Another white-collar work comedy, perhaps following the trail opened up by The Office, Up In the Air or even Mad Men. With a big difference, though. This one feels more like one of those wild college films or teenage romps. The folks here are adults, insurance agents who spend a weekend whooping it up at a convention. There’s fun in the recognition what sometimes really goes on, but there are also too many cheap laughs.

Ed Helms (of TV’s The Office) plays a small-town innocent who has to sub as a delegate to an insurance industry gathering. He has two orders: win the coveted Two Diamonds award and stay clear of a rival agent. Well, of course, he ends up sharing a room with him (played with great blowhard gusto by John C. Reilly). The other roommate is played by Isiah Whitlock Jr. (of The Wire.) In a fun in-joke he claims to be a big fan of that show which he puts to good use later on.

Helms, who improbably has an affair at home with his former 7th-grade teacher (Sigourney Weaver), is seduced by Anne Heche at the convention. He also smokes crack at a raucous biker party, sings O Holy Night with lyrics about insurance and exposes a convention scandal. When the humor is gentle and celebrates heartland decency, it works. The rougher scenes are tolerable. But then, right at the end, the film undoes its goodwill by throwing in a whopper of a fart joke. Who needs that? (5th Avenue Cinema and International Village) 3 out of 5

THE INFIDEL: The humor is uneven but the laughs are there if you’re ready for a cheeky look at the animosity between Muslims and Jews. It’s British, although written by an American, so we get both subtle and ham-handed episodes in a London Muslim’s culture shock.