New movies this week in Vancouver: ratings and reviews 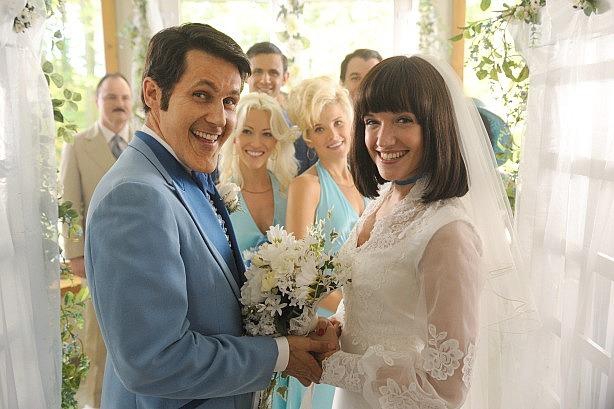 Rick Miller is Brian Mulroney and Stephanie Mills is Mila in this scene from Mulroney: The Opera.

Got any time left after hockey? And the election? There are lots of new movies to draw you out this week, even a Canadian political satire.

MULRONEY: THE OPERA: I had two big questions going into this one. Is it as bad as Score: The  Hockey Musical?  And how can you possibly sing about the Meech Lake Accord? I’ll answer “no” to the first because the film is actually quite fun. It’s silly and cheeky, like a series of editorial cartoons, light on satire but with some bite inside that lighthearted veneer. Our former Prime Minister comes off as a narcissist driven by ambition, surrounded by scandal-prone cabinet ministers and a little too friendly with both Ronald Reagan and Karlheinz Schreiber. But, with all the confidence he has in his own importance, he’s also rather likeable.

Comedian Rick Miller brings a wide-eyed, cartoonish spin to Mulroney; Colin Mochrie (ex-Vancouverite) is Jean Chretien, Wayne Best does a mean tango as Trudeau and Joanne Boland, in a necessarily small role, is Kim Campbell. The actors are all well-known from TV and the stage and, in a direct steal from Monty Python, there’s an “anonymous historian” who pops in now and then to offer context and occasionally points out omissions like “Where is Clyde Wells?”  It’s all quite nostalgic. Mulroney’s debate blast at John Turner is here (“You had an option, sir") but there’s little on free trade. The music by composer Alexina Louie shows a real familiarity with opera, in a number of styles. Mulroney’s songs for instance are Wagnerian. Most are lighter. They’re all recorded by professionals and lip-synched by the actors. (Sat. 1 p.m. at  The Fifth Avenue, Scotiabank and four suburban theatres. And again Wed. April 27)  3 out of 5

SCREAM 4: It’s 15 years after the first in the series, 11 years since the last one and the formula remains the same: laughs, startles and stabbings liberally mixed up, while teens expound on the conventions of slasher films in a know-it-all fan communication to the fans in the audience. The events of the first film, showed up in the sequel as a movie-within-a-movie called Stab. The teens in this new one are watching Stab 7 and bemoaning the inevitable decline of quality as these series progress. They’d be happy to know this series has rebounded by renewing itself.

The regulars are back. Courtney Cox is now a writer and married to the deputy who is now sherriff. (He’s played by David Arquette, who in real life is now divorced from Cox, which is fodder for a few ironic lines in the script). Neve Campbell, the recurring target of the killer in the ghost mask, has written a book and come back to publicize it and to introduce one of several new characters, her niece, played by Emma Roberts. Anna Paquin and Rory Culkin are two other new faces. The cel phone is now the main vehicle to move the story along and in the iconic opening, the killer not only calls with threats and the question “What’s your favorite scary movie?”  but also texts. It’s a clever re-charge and by far the best sequence in the film. The rest is standard, bloody stuff, although with a general swipe at social media and a specific attack on the urge to become famous. The film isn’t very scary but it is fun. (Scotiabank and many suburban theatres) 3 out of 5