The Help, The Whistleblower, 30 Minutes or Less, Final Destination 5 and a catch-up look at the new Planet of the Apes movie 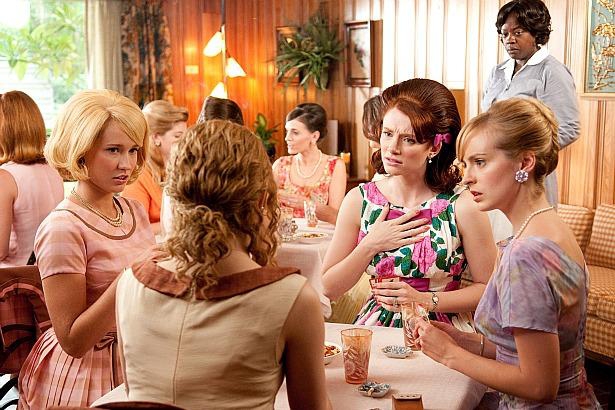 The ladies at bridge are shocked in The Help when Emma Stone reveals what the black maids really think about them..

Racial segregation. Sex trafficking. Abusing animals. Death. The subjects aren’t light this week, but look closely. There is entertainment to be had.

Rise of the Planet of the Apes  3

THE HELP: Some are carping that this is civil rights lite. I don’t mind. Yes, I’d like to see a little more grit. It takes place in Jackson, Mississippi after all, where civil rights activist Medgar Evers was killed. We only see him briefly on the TV news and the characters hardly talk about him at all — or his cause. This story, from the best-selling novel, is about life during segregation as ordinary people felt it. Well-off whites display casual racism. The black maids who serve them hide their resentment. It’s a code of behavior that’s unspoken but firm.

In this film, it’s broken open, not by yelling but with lots of humor and heartfelt truth. Emma Stone plays a young white woman, just back in town and hired by the local paper to write an advice column while aspiring to something bigger. She coaxes two maids, excellently played by Viola Davis and Octavia Spencer, and later a roomful of others, to tell their side of the black-white divide for a book.

We’re told only a few of those stories. The film is more about gaining their trust and overcoming their fear. And watching the white women, especially a busy-body bitch played by Bryce Dallas Howard. She campaigns to require separate toilets for black maids and fires hers for using the wrong one. It’s a one-note role and apparently far more developed in the novel. The film gives us stock characters and stock situations and makes its obvious points directly. But it works because of the wonderful acting by a terrific cast, including Allison Janney, Sissy Spacek, and Cicely Tyson in smaller roles and Jessica Chastain as a woman who’s just as much an outsider because she’s considered white trash. A poignant and satisfying film. (Park Theatre, International Village, and suburban theatres)  3 ½ out of 5

THE WHISTLEBLOWER: Here’s a film to really shock and outrage you. It tells of a sex-slave racket that was going on while the United Nations was trying to keep the peace in Bosnia in the 1990s. UN staff and a private security firm hired by the United States seem to have been deeply involved. Not only as customers, but also as enablers. Not all of it is perfectly clear, a shortcoming of this film, but the story is so provocative you’ll overlook a few problems.

The story is true, as told by Kathryn Bolkovac, a policewoman from Nebraska, who joined the peacekeeping mission and stumbled upon the sex-trafficking of young Ukrainian women at a nightclub, both the front public area and the backroom of grungy beds, chains, needles and condoms. Rachel Weisz plays her with growing anger and determination as she sees the club raided by police but allowed to continue, perpetrators protected by diplomatic immunity and her supervisors refusing to take action because “we’re monitors, that’s all.”

Others try to intimidate her but Vanessa Redgrave as a UN official encourages her. We’re drawn into the step by step investigation that turns into tense danger as she uncovers the scandal. This is a thriller that becomes grim and gritty as it progresses and includes a terrifying torture scene to shut up the girls who were tempted to talk. (5th Avenue Cinemas) 3 out of 5

FINAL DESTINATION 5  3D: Our very own Lions Gate Bridge is the real star of this one, although they call it The North Bay Bridge. The special effect people do an absolutely top-notch job of destroying it on screen. Cracks appear on the bridge deck. They grow like tentacles. Part of the deck falls off. Vehicles fall through to the water below. So, do people although they tend to hit the concrete base first. One is impaled on a the mast of a sailboat.