Don’t Be Afraid of the Dark, Sarah’s Key, Vincere, Cosmonaut and Our Idiot Brother 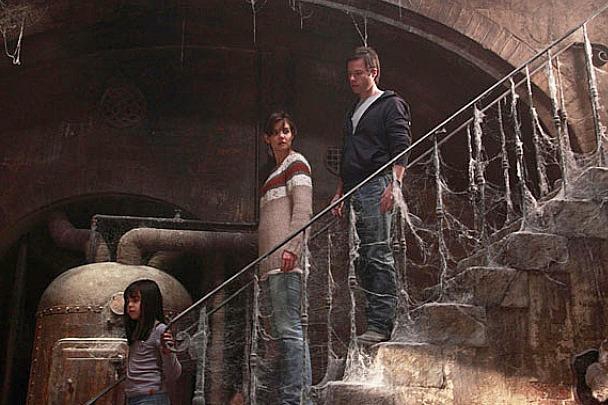 Bailee Madison leads Katie Holmes and Guy Pearce down into the basement of their grand Rhode Island mansion to prove there are small creepy creatures running loose.

I love movies with real stories I’ve never heard of before. There are two this week, along with a mild comedy about a loose-lip sibling and an easy to take, creepy horror movie helmed by a Vancouver director.

Don’t Be Afraid of the Dark: 3

DON’T BE AFRAID OF THE DARK: He didn’t direct, Vancouver’s Troy Nixey did, but Guillermo del Toro’s sway is all over this deliciously scary horror film. He wrote the film based on a TV movie that scared him out of his wits back in 1973. Like in his Pan’s Labyrinth, a young girl goes nosing around dark spaces where she shouldn’t be. This time, it’s not just one, but many small creepy creatures that come at her, first through whispers from an old furnace, then in her room and even under her bed covers. The house is an old Rhode Island mansion where she’s been sent to live with her father (Guy Pearce) and her soon to be stepmother (Katie Holmes). Guy is too busy trying to revive the house and get it on the cover of Architectual Digest to believe  his daughter’s reports on the creatures. She sets out with a Polaroid camera (Can you still get those?) to prove they exist.

The film dabbles in thrills and suspense, not gross out yuk. It’s got the look and atmosphere of those old Hammer Films and competent, if unspectacular direction from Nixey. He’s a comic book artist and new to the movies. The creatures, who aren’t shown until well into the film, are a bit of a problem. They look like spindly insects rather than the hissing menaces they prove to be when baring their sharp teeth. Still, they’ll give you a few chills. As far as modern horror movies go, it’s mild stuff but entertaining. And 12-year-old Bailee Madison is a natural as the sullen young girl who stirs up trouble. (Scotiabank, some suburban theatres) 3 out of 5

SARAH’S KEY: A compelling film with a story I’ve never heard about before. It relates a shameful incident in 1942 when police in Paris arrested some 12.000 Jews, held them in a velodrome for several days and shipped them off to concentration camps. The notorious Vel d’Hiv round up was also shown in another French film last year, but it wasn’t released in North America. This one holds down the most horrid details which has some damning it as Holocaust lite. Not really. There’s enough horror left in the families torn apart, the terrible conditions in the stadium and the anguish of one little girl. Sixty seven years later Kristin Scott Thomas, as a magazine writer, works to uncover her story.

Sarah hid her brother in a locked closet when the police came. She is desperate to find a way back to him. She plots an escape, is told to get lost by some small-town people but is helped by one farmer and his wife. Thomas uncovers the facts of her journey and we’re drawn in by the thrill of discovery at every step. It takes us way beyond Paris, past war’s end and ultimately into both sadness and human kindness. The film is weakened though by letting the writer’s own story get in the way. She’s about to move into an apartment where her husband’s grandparents lived. They had moved in soon after the Jews were ousted. She’s pregnant and doesn’t want an abortion. Far too convenient and/or distracting from the real story, and tending to the maudlin. Later, a character tries to deny he’s Jewish which seems far more relevant to the theme of family and cultural survival. Thomas and young Mélusine Mayance as Sarah both give strong, moving performances. The film is about half English and half French. (5th Avenue Cinemas)  3 ½ out of 5

VINCERE: You might not be looking for a love story involving Benito Mussolini but don't pass this one by. We haven’t seen the Italian fascist dictator like this before: a lovable rebel given to hot steamy sex and then betrayal. This is not fiction; it draws on two books and a documentary.