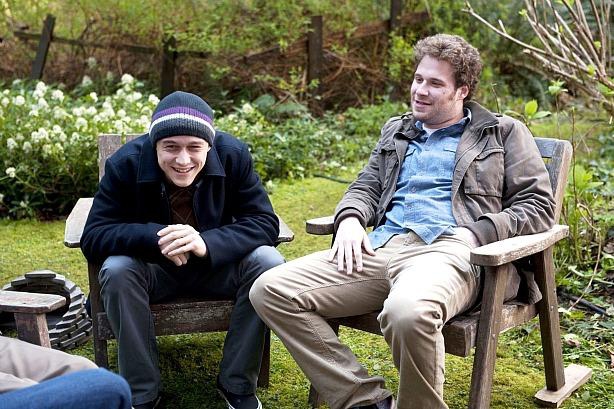 Two films about cancer in one week. Also a Canadian-Bollywood hybrid and three films not available to us for preview. That’s OK. It leaves more space for my latest picks for films to see at the Vancouver International Film Festival.

Here are both lists:

Blood in the Mobile

50/50: While I applaud Seth Rogen and Evan Goldberg, his long-time pal from Point Grey High school, for getting this film made, I find it just a bit too light. The subject is cancer after all. The story is their friend Will Reiser’s battle to survive the disease and it starts as a buddy comedy, becomes a romantic comedy and has only a few moments of the terror that must surely have also been there. Joseph Gordon-Levitt, in his usual nice-guy mode, plays the patient and Rogen plays his wise-cracking best friend. Cancer can help you pick up girls, he suggests, and his views on a girlfriend’s sexual duties are from the stone age. Typical modern comedy stuff.

A sweet attraction develops with a “supportive care” therapist (Anna Kendrick) and that gives us several lovely scenes. Then, in a cancer ward, we do get some tougher material, from a couple of older patients with a mordant wit. More of that would have made this movie more real and not feel like it’s soft-pedaling. Set in Seattle but filmed in Vancouver where we can apparently run the sea wall right to the Pike Street market.  (Scotiabank and suburban theatres)  3 out of 5

RESTLESS: A second film about cancer this week. Well, not as directly. It’s Gus Van Sant’s quirky romance between a terminally-ill cancer patient (Mia Wasikowska, who starred in the most recent Alice in Wonderland) and a damaged young man (Henry Hopper, Dennis’ son). They meet crashing funerals, both playfully looking at death.

The film is more about his problems than hers. He almost died in a car accident that killed his parents, still feels the trauma and claims to know about death because he was out for almost three minutes. He plays battleships with a ghost that looks like a World War 2 Japanese pilot. She’s generally cheerful and cites inspiration from Charles Darwin. “The most important scientific mind there ever was and ever will be,” she says. It all may sound artificial and affected but this film delivers more sincerity and considerably more emotional punch than 50/50. And quite a bit of humor too with a buoyantly upbeat mood. Mia is radiant and natural. And Henry? Well, he’s new. Good at sulking, though. (International Village)  3½ out of 5

BREAKAWAY: A Canadian spin on the story we saw in Bend it Like Beckham. There’s even an overlap. The distinguished Indian actor, Anupam Kher, plays the father in both films. This time he forbids his son playing hockey. The son secretly defies him, forms an all Sikh team to take on the biggest white team around and gets Rob Lowe to coach.

Vinay Virmani plays the son, and wrote the script, inspired by a comedy routine by Russell Peters, who also appears in the film. It’s now broadened into a conflict between assimilation and family loyalty. The son has cut his hair, dropped the turban and dresses like any Ontario man. There are other issues familiar to south Asians. A brother gets bullied for his long hair. League rules don’t allow turbans. Some of the white players are crypto-racists. The script wisely underplays that angle. The point is made without belaboring it. There are a couple of musical numbers that come off like second-rate Bollywood and those are ridiculous-looking helmets our boys come to wear. But overall the film has humor, a lightness of tone and an energy that make it a pleasant enough entertainment. (International Village and suburban theatres) 3 out of 5