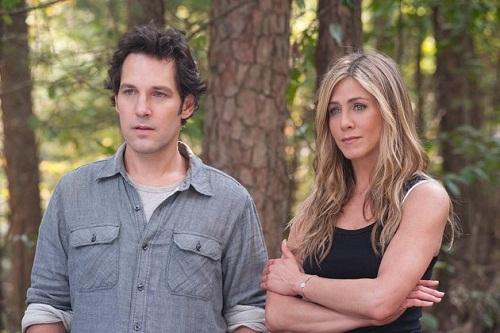 Since it's Oscar weekend with many of the contending films still in theatres, you wouldn’t expect a lot of new arrivals. But look, there are 10 of them.

We’d better get right at it. Here’s the list:

WANDERLUST: There’s been much comment that Jennifer Aniston appears topless in this new comedy.  If that’s what’s drawing you to see it, you’ll be very disappointed. That scene comes in a news story on TV where it is “pixilated” to stay legal and Jen’s modesty remains intact. There are other reasons to be disappointed. The film could have said something important about people off the grid, hippies in communes. For a time, as one character insists that the proper term is “intentional communities” it looks promising. It captures the ambience of these colonies perfectly. I know that from three that I’ve visited. But gradually easy-to-make jokes about free love, jealousy and goofy idealism take over and the plot takes a clichéd turn into a casino protest. That’s where Aniston does her over-hyped stunt.

She and Paul Rudd play a New York couple who escape unemployment in New York for Atlanta, Georgia, where his brother is a successful businessman. Also a very crass nouveau riche, played spot-on by Ken Marino. They opt instead for the commune, where Alan Alda plays the aging and memory-challenged founder and Justin Theroux (Aniston’s current, real-life boyfriend) acts like a leader and proclaims “we have no leaders”. It starts funny, and slowly grows vapid and juvenile, although a sharp spoof of TV sexism is a late highlight. This is a Judd Apatow production so be aware there are bare penises dangling, nudist seniors running right towards the camera and a hilariously obscene soliloquy by Rudd. (International Village and suburban theatres)  2 ½ out of 5

GOON: This Slapshot  wanna be is haunted by a few ghosts. Rick Rypien, Wade Belak and Derek Boogaard. Even Reggie Fleming. The first three are hockey fighters who died last summer and set off a media hand-wringing about the sport’s so called “enforcers.”  Fleming died in 2009, possibly, it was recently revealed, with brain damage from years of on-ice fighting. It is in that context that this comedy arrives to honor players with far more knuckle-power than skill. It’s spirited and funny but by necessity also rough, bloody and foul-mouthed with one all-purpose word and cock jokes everywhere. Or, in other words, for certain movie fans only. 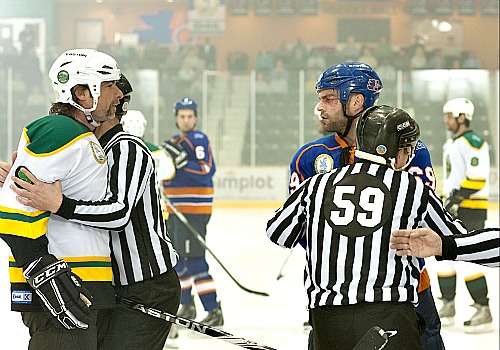 Seann William Scott plays the simple-minded kid who is discovered fighting in the stands one night and recruited for just those skills by a minor league team. Eugene Levy, his cast-mate in the American Pie movies, plays his father and the only one to warn of the medical dangers in fighting. Seann goes about his work dutifully, boosts the team’s success, awkwardly romances a hockey groupie and draws the attention of a legendary older goon (Liev Schreiber) for an eventual showdown. It’s almost a western in that sense. The story is based on a real minor-league player named Doug Smith, but for some reason, here in the script co-written by Evan Goldberg (Superbad) he’s turned Jewish and likened to “the Hebrew Dolph Lundgren.” I don’t know why either. But the small-team atmosphere, the various players in the locker room and the rabid fans seem to be shown accurately by Michael Dowse who also directed the Fubar movies, both Canadian classics, to some. (International Village and suburban theatres) 3 out of 5

RAMPART: We’ve seen bad cops before. The movies love them. But I can’t remember one as realistically envisioned as this one. He’s a liar, a cheat, a braggart, violent and bullying but also convinced he’s right in how he fights crime. He’s glib with legal buzzwords and prides himself on his ability to make up imaginary court decisions to cite in his defense. There’s more, including a turbulent home life, with two daughters born of different mothers, who just happen to be sisters and hate him. The character is drawn with considerable depth by crime novelist James Ellroy and brought to life by Woody Harrelson in a fine performance.