Woody stars in the weakest one. He and Judy Davis are a married couple visiting their daughter and her fiancé, whose father is a powerful singer. Woody puts him on stage in a shower stall.  Elsewhere, Jesse Eisenberg and Ellen Page appear in a better story. He’s an architecture student married to Greta  Gerwig and she’s a visiting actress who seduces with her vulnerability. Alex Baldwin hangs around as a cautionary voice and the story’s only source of vitality. Italians figure in the others. Roberto  Begnini, as a nobody who is hounded as a celebrity in repetitive sequences, and a honeymooning couple who find themselves accidentally separated in the bustling city. The groom benefits from another accident when a prostitute (Penélope Cruz) is wrongly sent to his room.  He has to pretend she’s his bride. Promising ideas, but often dull, uninspired or drawn out results. Short on Woody’s wit and humor too. (5th Avenue, International Village) 2 out of 5

COAST MODERN:  The cinematography is absolutely gorgeous; the message a bit disconcerting. Modernist architecture, according to one expert in this film, is “a beautiful failure” that never caught on because people thought its sharp angles and walls of glass were too strange to live in. And, new examples, according to Douglas Coupland locally and a critic in San Francisco, are often built for people who want to show off. The film makes the case that at its best modernism creates “a habitable work of art.” It’s uplifting. It doesn’t enclose you but connects you to nature and the landscape outside. A man living in the Arthur Erickson-designed Eppich house even claims there are health benefits. 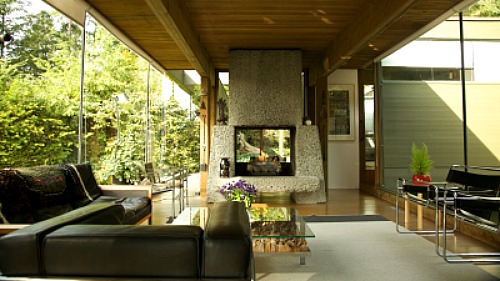 The film is a celebration of the style from its beginnings in France in the 1920s to a post-war surge in California which came right up the west coast.  We tour houses in Los Angeles, Portland. Seattle and here and get very personal impressions from architects, critics, like Trevor Boddy locally, and people who, like Coupland, live in one. Some of these places don’t look all that cozy; more like office building lobbies. But local filmmakers Mike Bernard and Gavin Froome make a spirited case for their livability and their esthetics, especially when they flash a montage of ugly monster houses built here in the 1980s.  They’ll attend the weekend screenings (at 6:45) to discuss more. (VanCity Theatre) 4  out of 5.

BEYOND THE BLACK RAINBOW: Several times as I watched this film I thought of Scientology. The comparison may not be intended at all. It may be just me trying to make sense of a story that doesn’t explain itself and traffics in mindbending vibes and visuals instead. Imagine a pastiche of moody science fiction from years ago mixed with echoes of David Lynch, early Cronenberg and various other (both art and B-movie ) purveyors of enigmatic trips. 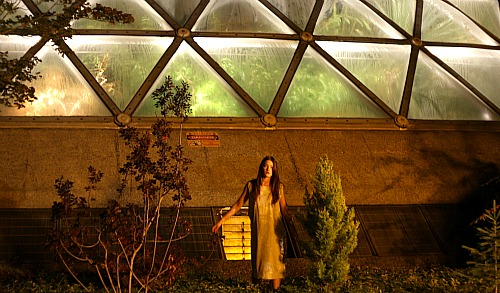 A young woman (Eva Allan) is getting treatment in an institute that offers “serenity through technology.” The sessions are cool, hypnotic and creepy. She’s told she’s too sick to leave, she doesn’t know herself and anyway the world outside is in chaos. Her therapist snuffs out any defiance with a harsh diamond light and eventually she tries to escape. Yes, that’s the Bloedel Conservatory she’s exiting in the picture above. The film was made here by Panos Cosmatos, who recently moved over from Victoria. (His father made the second First Blood film.) This one is for devotees of the odd and inscrutable delivered with hallucinatory style and atmosphere. The director and cinematographer will be there at tonight’s (Friday’s) 8:30 screening. (VanCity Theatre) 2 out of 5 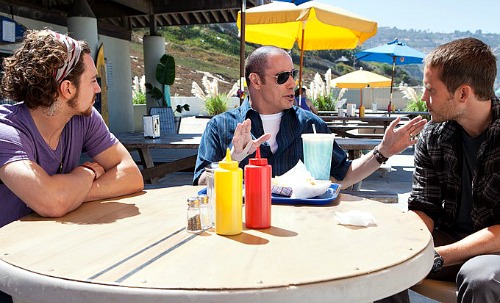 That involves the baddies including John Travolta, as a crooked drug enforcement agent, Salma Hayek as the leader of a Mexican drug cartel, and Benicio Del Toro, as her smirking enforcer. The cartel wants to start a joint venture with the boys and when they refuse, kidnapping, torture, point-blank killings, a military style assault and prolonged scenes of inflicted pain follow. Also a video of beheaded bodies but that’s just a cautionary message. This is too grim to be a caper movie. There’s little fun in it, and, unusually for an Oliver Stone movie, almost no political themes. Only a brief suggestion that pot should be legalized because the war on drugs is bringing Mexican-style violence to the U.S. (International Village and suburban theatres) 2  out of 5

NOTE: The images are movie stills provided by the producers and are therefore the exclusive property of their copyright owners.