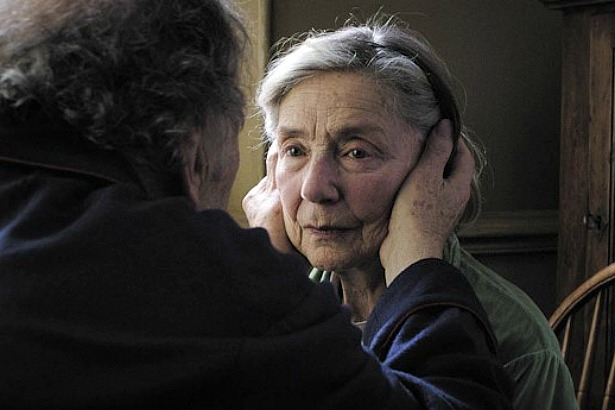 Old age is a key theme this week in three films, the much celebrated Amour, the comic Quartet and The Last Stand with the return of Arnold. Time itself is contemplated in another film. There’s also a ghost story, a paranoid fantasy and Canada’s 10 best of last year.

AMOUR: It starts with a battering ram and ends with a shock but in between Michael Haneke’s fine film is a sensitive and very humane consideration of something we don’t often want to think about: what old age will do to us. And what it eventually will bring on. As unsettling as the subject is, and we’re spared few details, the film is not difficult to watch because the overriding tone, as the title suggests, is love. 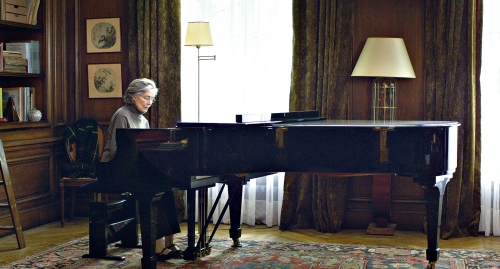 Haneke, of Austria, is back in Paris working with two icons of French cinema: Emmanuelle Riva, whose career dates back to Hiroshima Mon Amour, and Jean-Louis Trintignant, best remembered for A Man and a Woman and Z. They play a couple in their 80s, both retired music teachers living comfortably in a sizeable apartment with their books and music. One morning, she suffers a small stroke. Sometime later, another. She’s hospitalized and when she returns she’s not the vital woman she was, but confined to a wheelchair and needing full-time care. A daughter (Isabelle Huppert) shows up a few times and various caregivers come through, but most of the time the elderly couple just have each other. He does the caring, the feeding and the diapering while she declines further. Riva’s expressive face continues to communicate as her capacity to speak drifts away. He shuffles around as old people do. Both don’t seem to be acting at all. It’s almost like watching your parents or grandparents. The film won the top prize at Cannes last May, a Golden Globe last Sunday and five Academy Awards nominations. It has to win. It’s an intensely emotional work of art. (5th Avenue Cinemas) 5 out of 5

QUARTET:  Another examination of old age, played as a comedy drama this time but still respectful.  The residents of a retirement home for entertainers put on a recital every year on Verdi’s birthday. Billy Connolly, Tom Courtenay, Pauline Collins and others are rehearsing under the gruff demanding direction of Michael Gambon when Maggie Smith arrives. 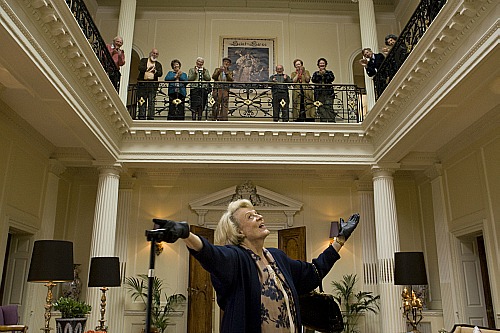 She’s a celebrated opera singer (“she was more ambitious than everybody else”) and something of a diva (“I never took less than 12 curtain calls”). The four should perform the quartet from Rigoletto but she refuses to be in the show, takes her meals in her room and won’t mingle. Old resentments, principally with a former husband, have to be worked out first and on the way there we get many funny scenes, an airy-light tone, smart writing and wonderful acting from these veterans. Collins plays a bit too ditzy; Connolly too lecherous, but Courtenay is dignified (even when he lectures a class of young people on the parallels between opera and hip hop) and Maggie Smith is again imposing, even when she’s vulnerable. (She drops an f-bomb. Is that a first?).  Dustin Hoffman, in his first time directing a movie, gets strong performances out of them all. If you liked The Best Exotic Marigold Hotel, you’re bound to enjoy this one too.  (International Village, Park & Tilford and Langley Colossus) 3 ½ out of 5