Big praise for Life of Pi and Silver Linings Playbook. Red Dawn, not so much. 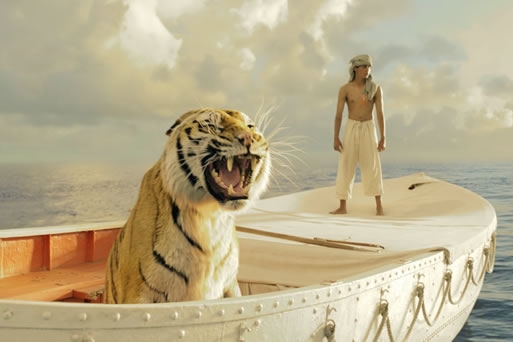 The new ones came early this week, in time for American Thanksgiving. Two of them are going to be staying for a long time.  There’s also a new animated film for kids, an invasion thriller for the intelligence challenged  and some new films from Europe.

Rise of the Guardians:  3

LIFE OF PI: It’s not often that a much-loved book also satisfies its readers as a movie. This one does. A friend tells me she thinks it actually improves on the book, certainly in bringing the visuals alive. They include a stunning shipwreck (vastly expanded from the book), a whale encounter, magical scenes of nighttime phosphorescence in the ocean, and more, all shown in sparkling, not-at-all-gimmicky 3-D. Yann Martell’s Can-Lit classic has been turned into a gorgeous adventure of survival by Ang Lee who’s wide-ranging resume as a director includes Brokeback Mountain and Crouching Tiger, Hidden Dragon. 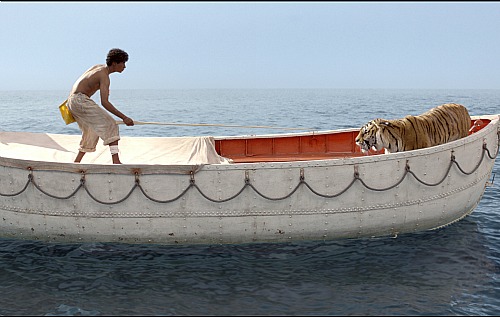 Pi  Patel survives when the ship carrying his family from India to Canada sinks in the Pacific. He lands in a lifeboat with part of the zoo his father owned, a zebra, an orangutan, a hyena and a Bengal tiger. After a few incidents, it’s just him and the tiger, for 277 days.  He has to show he’s boss, tries some basic communication with the animal and for his own safety catches fish to keep it fed.  Half the film is set in that boat and the survival ordeal becomes the heart of the film. That diffuses the novel’s religious themes although Pi, who dabbled in three religions and is convinced God is testing him, is driven to yell up at the sky at one point: “What do you want from me?” Elsewhere he says the story will make us believe in God. Not likely. The power of perseverance, yes. The tiger by the way, looks absolutely real. He was created by computer, in Los Angeles and here in Vancouver. (The Park, Scotiabank and suburban theatres) 4 ½  out of 5

SILVER LININGS PLAYBOOK:  This was the audience favorite at the Toronto Film Festival so you know it’s a crowd pleaser.  What you must also know is how fresh a take it is on that movie staple, the romantic comedy. David O. Russell has found multiple ways to inject novelty, a touch of quirkiness and lots of humor into a story that feels familiar and brand new at the same time. 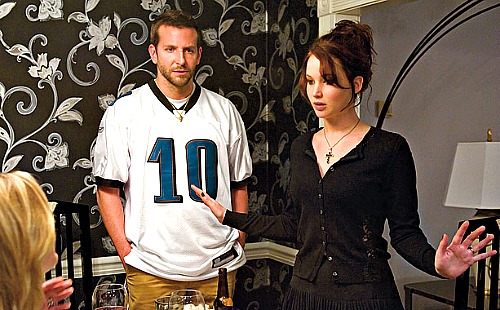 Bradley Cooper and Jennifer Lawrence play the couple here. They’re both damaged. He’s just out of a mental facility eight months after beating up a man he caught taking a shower with his wife.  She blames herself for her husband’s death and for a time lived like a slut but no more and no regrets. You know they’re right for each other from their first awkward and testy meeting. They meet  again several times,  while jogging, spouting snappy dialogue of annoyance mixed with interest.  He wants her to get a message to his ex-wife, off-limits to him because of a restraining order. She needs a partner for a dance contest.  Also in the mix is a risky bet made by his father, a small-time bookie and big-time football fan (Robert De Niro, showing a reinvigorated flair for comedy).  Improbable, sure. But, except for a couple of overwrought scenes, it’s entertaining and delightful, with strong acting and writing and two very likeable leads.  As he says “stay positive” because “negativity is a poison”.  (5th Avenue, Scotiabank and some suburban theatres)  4 out of 5

RISE OF THE GUARDIANS:  The latest from Dreamworks Animation has an admirable objective: to revive a sense of wonder and love in children’s entertainment. It’s odd then how it tries to do that.  Through action, conflict and 3-D razzle dazzle and not a lot that actually serves to inspire wonder. Also, notice how often a simple punch settles something. That can be funny, but I don’t see much love in it. 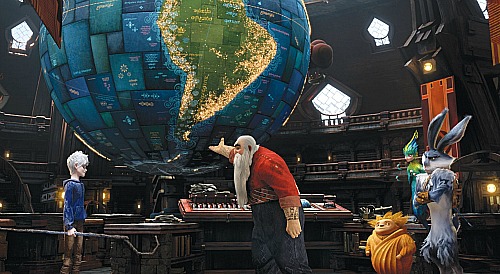 The story is from a series of books by William Joyce, who’s had other of his works used in films and on TV. In this one, Santa Claus, the Easter Bunny, the Tooth Fairy and Sandman are troubled that many children don’t believe in them anymore because the boogeyman is drawing them over to the dark side. (Relevant, yes. Did you read about the drunk arrested at a Santa Claus parade in Kingston for yelling at the children that Claus is a myth?) The four iconic characters invite Jack Frost to join them and fight back. He’s a loner and hard to convince but once he comes on side puts up a great fight. They all do. They’re like superheroes, which is said to make it cool again to believe in them. I don’t know about that. The animation and the action scenes are first rate though as is the voice cast, including Hugh Jackman, as the kids’ favorite, the wisecracking Australian Easter Bunny, Alec Baldwin as Santa with a Russian accent and two swords as weapons and Jude Law as the sneering, taunting, nightmare-causing boogeyman, here named Pitch Black. (International Village, The Dolphin and many suburban theatres)  3  out of 5