Big praise for Life of Pi and Silver Linings Playbook. Red Dawn, not so much.

RED DAWN: Here’s another thing about sleeping with an elephant. Trudeau said we’re affected by “every twitch and grunt.” Through the movies we have to share every fit of paranoia too. Over an invasion, for instance by a hostile power. Lots of them out there. Back in 1984, when this story was first filmed, it was the Soviets. Three years ago when it was remade, it was the Chinese. Oh, wait a minute. They’re pretty big these days and in effect hold a mortgage on the U.S. Also, they’d never allow this film to play there. So, now in 2012, as it’s re-edited an finally released, it’s the North Koreans who invade. That’s even more ridiculous. The North Koreans don’t have any reason or resources to do that. They can’t even feed all their people.

However, one morning the sky over Spokane, Wash., is filled with parachuters. Koreans soldiers float down, take over the streets and shoot any officials they can’t intimidate. 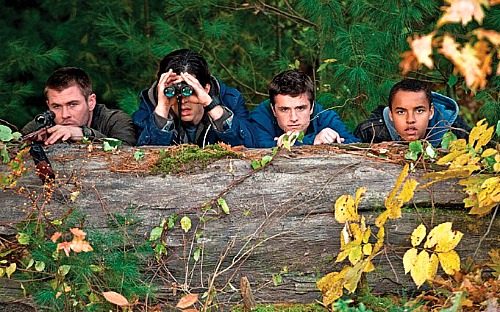 A group of teens plus an Iraq war vet speed off to a forest cabin and organize themselves as The “Wolverines” Free American Army.  Among their tactics is a skateboard bomb and commandeering food from a Subway restaurant. Lots of action follows as they claim inspiration from the Viet Cong and the mujahideen.

What? Commies and jihadists? It’s a very mixed up movie and in validating the militia types and that anachronism, the right to bear arms, also kind of dangerous.The film stars Chris Hemsworth, pre-Thor, and Josh Hutcherson, pre-The Hunger Games. (International Village and suburban theatres) 1 ½ out of 5

THE AMBASSADOR:  The startling fact emerges in this bit of international provocation, that there are people who, for a price, can arrange a diplomatic appointment for you with some African countries. Liberia, the film says, has issued some 2,500 of them. Why would you want one? Well, you can cross borders freely and bring out diamonds without being arrested. Handy if they’re those so-called “blood diamonds.” 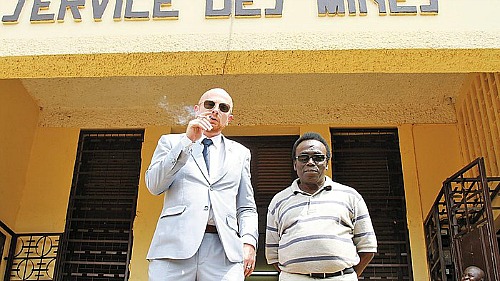 The Danish filmmaker, Mads Brügger, is part Borat and part Yes Men. Last film, he got himself officially invited to North Korea as a supporter and comrade. This time he’s in the Central African Republic, which is just as the name says right in the middle of the continent. He bribes various functionaries, tries to start a match factory staffed by pygmies and is really after a deal with a shifty diamond miner. He secretly films everything, including a long analysis by the country’s security chief who is soon found murdered.  Brügger’s in danger too because he’s passing himself off as a Liberian consul but his papers haven’t arrived. Gradually a funny and sad picture gets filled in displaying rampant corruption. It’s not news but it is astonishing to see so much proof.  (VanCity Theatre) 4 out of 5

Playing in tandem with:

5 BROKEN CAMERAS:  A documentary showing Israeli settlers, aided by soldiers and then that “separation wall,” encroaching on Palestinian farm land.  An English critic says it’s an extremely powerful picture of “injustice on a massive scale.”

EUFF 2012: The Pacific Cinematheque’s annual festival of films from the European Union is now on.  Until Dec. 6, 26 titles will be screened. Only Malta is not represented and Denmark sent a 13-year-old classic. The others are either brand new or recent and most have never been shown in Vancouver before. They range from serious to comedy to caper. Check out the website at eufilmfestival.com for the whole list and descriptions of each.

I’ve seen three of the films playing this first week, two of them are light and amusing, the other is a resonant documentary-drama hybrid.

SMALL CRIME, which kicks off the festival is from Cyprus and filmed on a small Greek Island where a local cop has little to do except catch a teen driving without a license and telling nudists to put their clothes on. 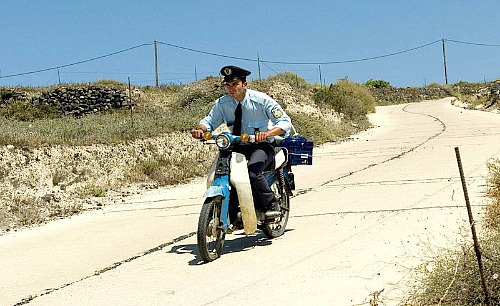 Until one evening, when the town drunk is found dead at the bottom of a cliff. An accident? The cop suspects there’s more to it. A glamorous TV star comes home from Athens and joins the investigation. This is a small-town charmer much like the ones we get from Ireland now and then. 3 out of 5

THE FOREIGNER is a French man who visits Bulgaria, is smitten by a sexy woman he bumps into, goes to the wrong house in the wrong village to visit her and manages to stir up an old feud between her father and the man at the wrong house as well as their sons. Shooting breaks out. When he returns to Paris, the woman and the wrong father go after him. The comedy in both countries is driven by miscommunication between people who don’t speak the same language but talk anyway. The humor ranges from clever to quite broad. 2 ½ out of 5

SILENCE is a slow, atmospheric time trip. An Irishman working in noisy Berlin, returns to the Donegal region in northwestern Ireland, and eventually to remote Tory Island where he grew up, to record sounds not made by humans. He sits in a lot of meadows listening to birds, the wind and water. Now and then people come by and they talk about home, their roots, the simple life and by implication the noise of modern Europe. These parts seem to be scripted; the rest is documentary. The film slow and calming but stick with it. Let the sensation of a quieter time wash over you.   3 ½ out of 5

NOTE:  All images are provided by the movie studios and are therefore the exclusive property of their copyright owners.