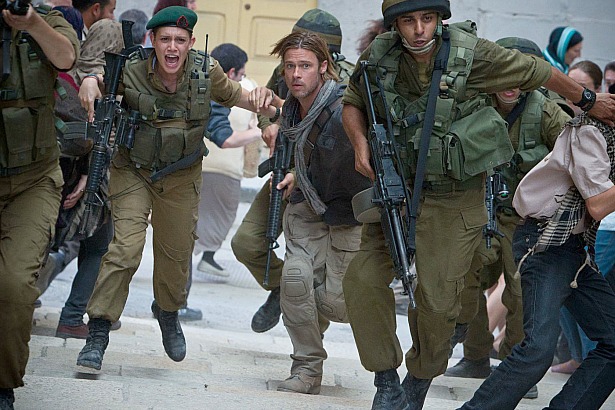 There are so many new films this week, there’s no time to dawdle. Just notice this: there’s not a dud on this long list.

Much Ado About Nothing: 4 ½

An Oversimplification of her Beauty:  3 ½

WORLD WAR Z:  I take it the zombie plague in the best-selling novel by Mel Brooks’ son Max is one giant metaphor for the tendency of governments and officials to mishandle crises. It’s told as an oral history from many countries and points of view. Don’t look for that in the film version. This is now a medical mystery and a standard thriller of a man (Brad Pitt) trying to protect his family. The geopolitical breadth  is reduced to a mere mention of a silly North Korean response and a visit inside Israel’s fix: a giant concrete wall to keep the undead out.  Failure to be vigilant, lets them in anyway.

We first encounter them in a most normal situation, a traffic jam in Philadelphia that stalls Brad and family. It’s a gripping sequence – as are several to come—but it’s presented as a surprise. Unlikely when, as we soon learn, zombies have already overrun much of the world.

Brad is a former United Nations staffer, coerced back into his job and on his way around the globe to find a solution. We don’t know much about him but several intrusive calls to and from his wife keep us clued in to what his real motivation is. The whole film is family-friendly. Zombies are killed without splatterings of blood and gore. Several sequences build a satisfying jittery tension, the computer effects are very good but the 3-D is again dark, almost murky. So: a film that’ll keep you interested but nothing special. (Scotiabank and many suburban theatres)  3 out of 5

THE BLING RING: I kept hoping for Sofia Coppola to say something profound about celebrity obsession and young people caught up in it. She grew up in that world after all. But no, her observations in her new movie are surface only, offering sparkle with only a thin layer of insight. But if you’ve ever wanted to peek into Paris Hilton’s closets (“her feet are so big,” says one character), marvel at the pillows with her face imprinted or gawk at the nightclub room complete with a dancer’s pole, all filmed in her actual house,  this is the movie for you. 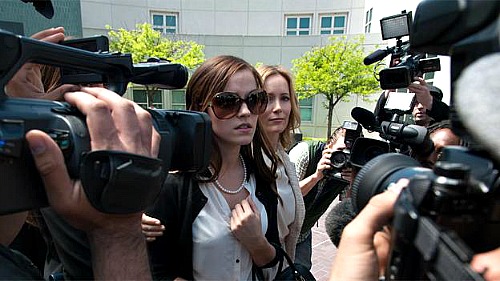 It’s a true story. Emma Watson plays one of five teens who robbed Hilton’s home, as well as Lindsay Lohan’s, Orlando Bloom’s and others, for watches, jewels, clothes and money.  Internet gossip sites told them when they would be out of town and Google got them the addresses. Smart kids, except that they didn’t watch out for security cameras and did eventually get caught and written about in a Vanity Fair article. The film intercuts with their after-the-fact comments which reveal an attitude of entitlement, a need to be “part of the lifestyle” and glib new dedications like “my journey to push for peace and the health of the planet.”  Good stuff, shiny and entertaining, but only a start in considering these self-absorbed, know-it-all kids. (International Village and two suburban theatres) 3 out of 5

MONSTERS UNIVERSITY:  Unlike the rest of the world, I wasn’t a big fan of Monsters Inc. (2001) which I found gimmicky and dull. No, no said many. The story of monsters harvesting energy from the screams of children they scare is deeply emotional. So, here’s another dose, but different. It’s set earlier, before  Mike (Billy Crystal) and Sulley (John Goodman) had become friends. In college, they were rivals. 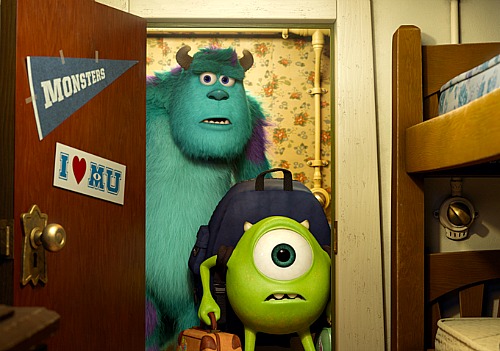 Mike was an outsider with a “not scary” reputation. Sulley was one of those annoying types who felt he could glide through without trying too hard. I remember guys like that and also the details of campus life this new Pixar film takes great pains to depict: the buildings, clubs recruiting, the Frisbee players, and more. As in The Internship set at Google’s campus, there’s a competition. Dean Hardscrabble (a smoothly menacing Helen Mirren) directs that the “scare games” will decide who will be accepted into the university. The braggarts from the top fraternity are the favorites while Mike and Sulley are stuck with a fraternity of oddballs. No, you don’t already know how it will turn out. The film, to its credit, doesn’t do everything as expected. Except for the animation. It’s excellent. Crystal and Goodman develop a believable friendship and the films delivers quite a few laughs within a rather ho-humstory. It’s preceded by The Blue Umbrella, a charming short that subtly animates real items on a street.  (International Village, Dolphin, and suburban theatres) 3 out of 5