Christian Bale becomes Cheney, a James Baldwin novel gets to the screen and World War I is re-visioned 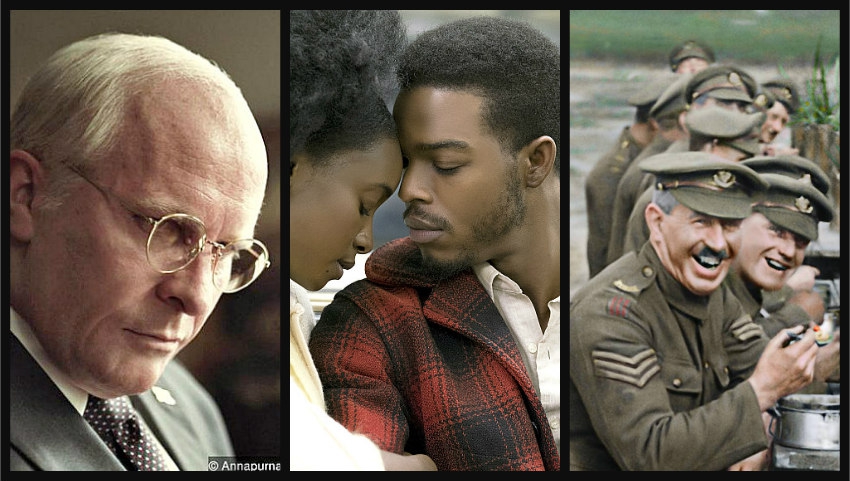 Also: Holmes and Watson take a pass, it seems

It’s the busiest time of the year at movie theatres so besides the many big films already playing, we have three more with a Christmas day opening, though one seems a bit sheepish about it. And there’s an extra that been gathering great praise.

If Beale Street Could Talk:  4

They Shall Not Grow Old: --

VICE: Adam McKay had fun with local TV news with Anchorman and the stock market with The Big Short. Now he’s on to his biggest target yet, American presidential power and despite what the Golden Globes say in the six nominations they gave it, this is not a comedy. It’s got a lot of humor in it but the thesis is absolutely serious. It’s just a bit uncertain what the attitude actually is. The film is “liberal” according to a particularly meta comment near the end, but doesn’t trash the power of the POTUS. It shows what one man, Dick Cheney, George  H.W’s vice president, did to elevate it. And how his wife Lynne (Amy Adams) pushed him forward, starting with an ultimatum after a bar fight. 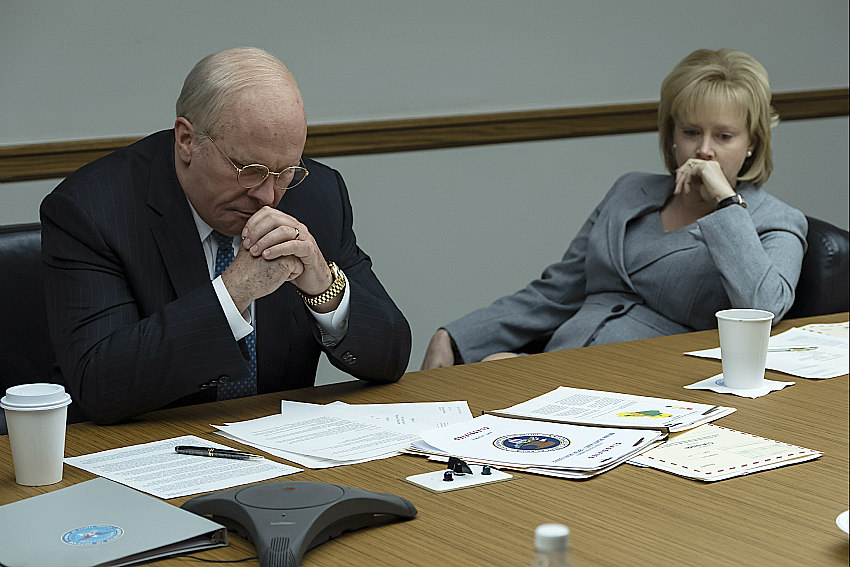 That’s Christian Bale as an almost look-alike Cheney. He goes through several transformations as the man’s career unfolds: hydro lineman, college from which he flunked out, Congressional intern to Donald Rumsfeld, advisor to Nixon, chief of staff to Gerald Ford, Congressman, secretary of defense and (after a career stall that sends the end-credits to roll prematurely) the most powerful vice-president ever. He believed in the “unitary theory” that whatever the president does is legal because he is the president and he knew that there’s no constitutional control on the vice-president. The film explains all that succinctly and shows the upshot. After 9-11, when the US had to hit back at somebody, Cheney agreed on Iraq. ISIS resulted but so did contracts for the oil services company he had led. 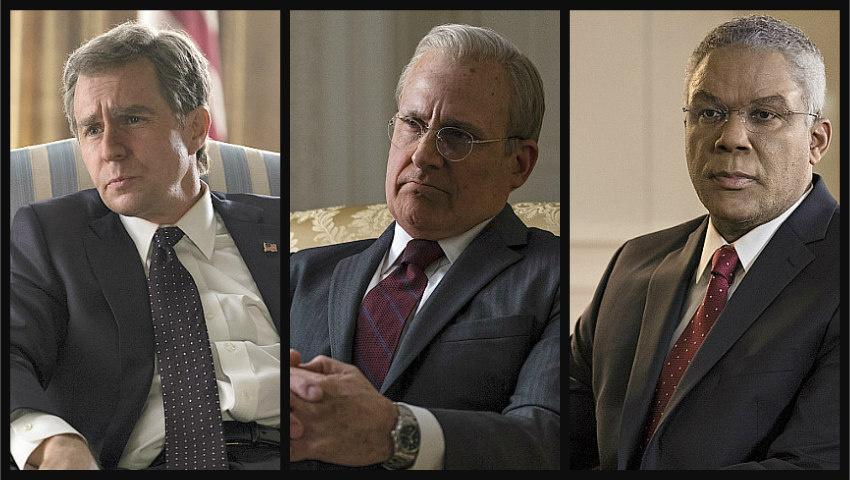 Sam Rockwell as Dubya, Steve Carell as Rumsfeld and Tyler Perry as Colin Powell are some of the other dead-on physical impersonations but the film belongs to Dick and Lynne, the power couple who plot their moves in Shakespeare-like verse at one point, endure his several heart attacks and keep the family together when their daughter comes out gay. It’s too quick an overview to serve either as a history or a biography. But it will keep your interest, teach or remind you of a few things, and with the breezy storytelling, entertain you. (5th Avenue, International Village and suburban theatres) 3 ½ out of 5

IF BEALE STREET COULD TALK: Inevitably this new film by Barry Jenkins is going to be compared to his last one, the Oscar winner Moonlight. No it’s not as good; it doesn’t flow as effortlessly under all the flashbacks. But it’s close, telling a highly emotional story of love hard-pressed to survive amidst injustice. It’s set in black society in the US of the 1970s, as imagined in a novel by James Baldwin. (I was astounded to read that so far it’s the only one of his novel s turned into an English movie. There was a French one 20 years ago). Maybe he was deemed too polemical for the movies until now. They’ve caught up and this one feels lyrical compared to them. It’s truthful about race relations but hardly a screed. 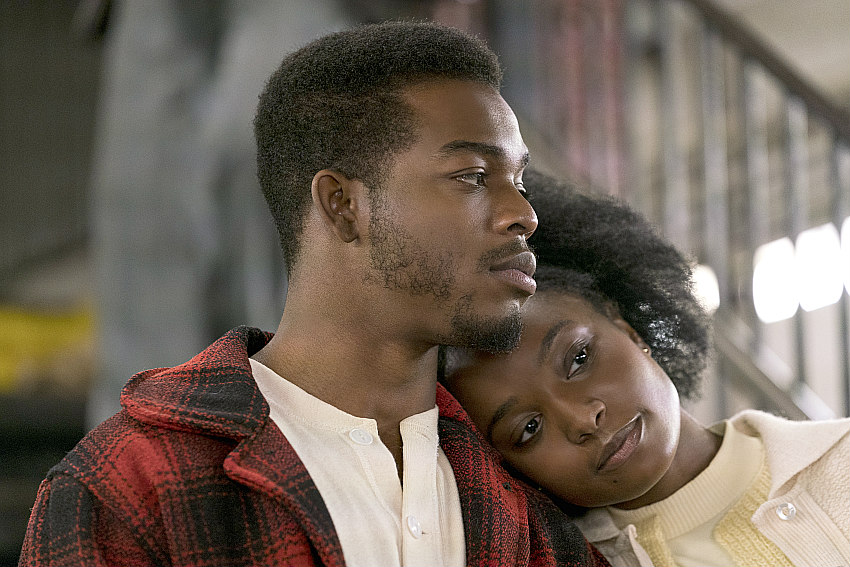 A young couple in Harlem (19-year old Tish, played by newcomer KiKi Layne and her sculptor boyfriend nicknamed Fonny, played by Toronto actor Stephan James,) are in love, engaged and in trouble. He’s in jail on a false rape charge; she’s pregnant. They can’t afford a lawyer; the system doesn’t care and keeps delaying the trial. She and her mother start searching for evidence themselves. More than that though, this film is about attitudes in a community. A friend recounts the horrors of white-man’s prisons. Tish recalls, in Baldwin’s words, that blacks are made to feel worthless. One mom rails about offending God and Jesus; while Tish’s, played by Regina King, is supportive. She speaks the key line: “If you trusted love this far, don’t panic now. Trust it all the way.” There are a few too many artistic flourishes, the lovers are together only in the flashbacks and racist cops we’ve seen before and yet this film manages to be quite affecting. (5th Avenue) 4 out of 5

THEY SHALL NOT GROW OLD: This film by Peter Jackson had has a great deal of publicity because there are strong pictures to print from it … 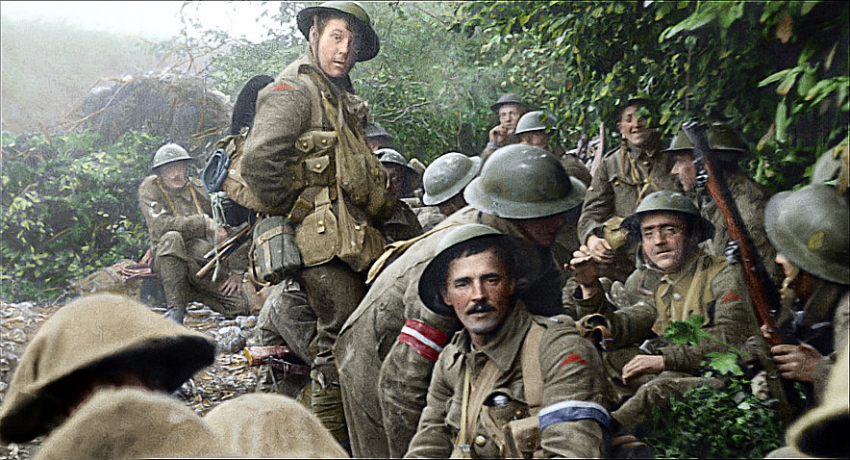 ... and because the whole project is remarkable. Jackson took hundreds of feet of film from World War I and formed them into a documentary about the soldiers in that useless war. He colorized the images, and had lip readers tell him what the men were saying. He also overlaid narration taken from interviews done later with veterans of the war. And as a final touch, he also struck 3-D versions of the film he created. It’s received very good reviews and will play one day only, Dec 27, as a special event. The locations and times are pretty diverse, so I’ll list all I know from around here.

HOLMES & WATSON: This is a bit worrying. Will Ferrell as the great detective and John C. Reilly as Dr. Watson? They’ll yuk it up, I’m sure, but will they respect the characters? They’ve starred together twice before, always in rowdy American films. Even with a cast of notable Brits behind them, including Ralph Fiennes as Professor Moriarty, and four days to foil a plot to kill Queen Victoria, the prospects here are iffy. 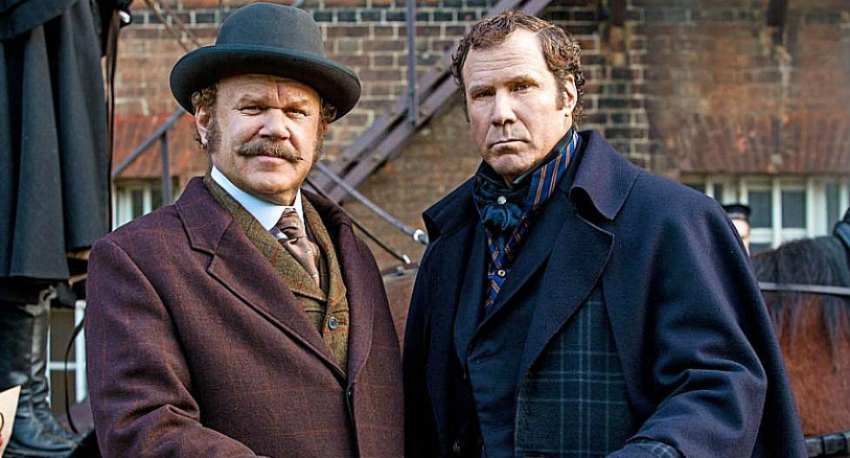 Sony, the distributor, didn’t show it to critics, so make of that what you will. Or you could wait until Jan 18 to see John C. Reilly as Oliver Hardy in Stan & Ollie, which I will be recommending. Steve Coogan is in both films.