The Dark Knight Rises and almost wows, Trishna fumbles a classic and Beasts of the Southern Wild may just be one

Six-year-old Hushpuppy (played with astonishing candor and naturalism by first-time actor Quvenzhané Wallis) repeatedly quotes her dad, or sometimes her teacher (as children do) to describe her life, the people around her and the dangers that terrify her. Water for one. Her community is on the Louisiana coast, just outside the levee and prone to flooding. In her imagination, she also fears a pack of ancient beasts running around like wild boars. Her teacher says “You gotta learn how to take care of people.” Her dad, played by another newcomer, Dwight Henry, a baker in real life, is tough in pushing her to learn personal survival skills because he’s sick and she’ll be alone soon. When the rains and the floods come, she’s prepared and amazingly resilient. There are surreal visits to a relief shelter and a party boat called Elysian Fields, a perceptive portrait of poverty in an off-the-grid community and a satisfying finish that has Hushpuppy eloquently proclaim: “I see I’m a little piece of the big, big universe.” Low budget; highly recommended. (5th Avenue Cinemas) 4 out of 5

TRISHNA: I didn’t see much Thomas Hardy left in Michael Winterbottom’s reworking of Tess of the D'Ubervilles. Then I noticed the novel has a subtitle: A Pure Woman Faithfully Presented. That is there, strongly. Just greatly altered. The story is now set in modern India, Mumbai and Rajasthan, not southern England 120 years ago. In the road accident, it’s not Tess but her father who’s driving, and a jeep not a horse cart. Trishna takes a job in a tourist hotel to pay off debts and is pursued romantically by the owner’s son. His friends are dabbling in the Bollywood movie industry. 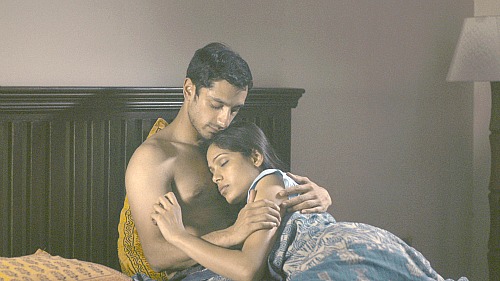 Initially it works. Old-fashioned attitudes about women, their equality and sexuality, transfer quite nicely to India even today. So do ancient ideas of male privilege. Bit by bit though, the updating becomes too much to stay credible. A three-episode sex montage is overkill. The biggest change, the issue that turns the story tragic, is no longer the shame of rape as in the novel but something harsher and even more jarring. Most of Hardy’s themes are there but Winterbottom’s tinkering to contemporize them feels artificial. The two lead actors, like the film, look good but don’t grab us. Freida Pinto (Slumdog Millionaire) mopes beautifully and Riz Ahmed, the England-based actor and rapper, seems too nice to turn into a humiliator. Roman Polanski’s Tess (1979) is a still better. (International Village) 2 ½ out of 5

FOUND MEMORIES: Is it a ghost story? A reality-based portrait of a town that's dying? Or both? That's part of what makes this very slow film compelling. We don't know and the ending which comes on as a big surprise doesn't clear up that question. The town, set in a formerly prosperous, now de-populating region of Brazil, is almost a ghost already. The cemetery is locked. "We forget to die around here," says one man. Life is repetition. 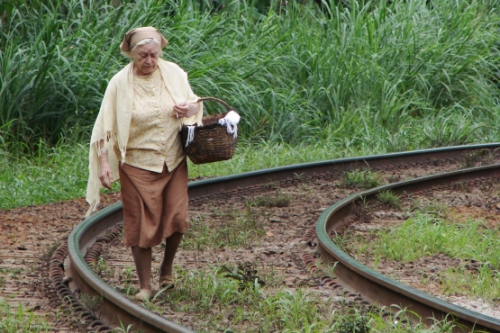 Only 11 people live there, two of whom we key on. Madelana (Sonia Guedes) is a widow who bakes bread for store owner Antonio (Luiz Serra). They argue over how to put it on the shelf before chatting over a cup of coffee. That happens every day. We see it several times. Minor variations keep it interesting. Later, the whole village attends church and a communal meal, where saying grace is long and silent. Talk about “nothing ever happens around here.” Then a young woman arrives, starts taking pictures to document an old way of life and stirs up the locals. It's more than a collision of modern and ancient. As it creeps along, the film casts a spell with beautiful, spare images and a meditation on time, aging and "that cruel enemy" death. In Portuguese, with English subtitles. (VanCity Theatre) 3 out of 5

TOWN OF RUNNERS:  This British documentary takes us to a small town in Ethiopia known for developing world class runners. Kenenisa Bekele, Tirunesh Dibaba, Derartu Tulu and Fatuma Roba, all Olympic gold-medallists, are from Bekoji, population 17,000, poor, agricultural and only recently provide with a paved road. The film centers on the fortunes of two teenage girls, a very successful coach and his poverty-stricken program. Good inspirational viewing with the Olympics now so close. (VanCity Theatre)

(For both films, check http://www.viff.org/theatre/ for days and times)

NOTE: All images are movie stills provided by the studios and are therefore the exclusive property of their copyright owners.