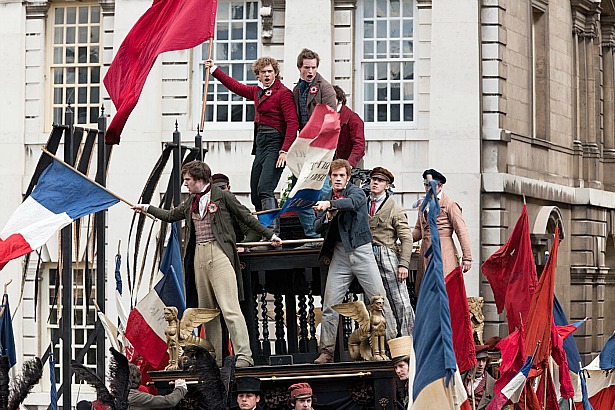 Christmas is a time of peace. Not in the latest movies. Revolution, injustice, slavery, racism and lots of violence are featured in one or the other of two new ones, both major award contenders.

LES MISÉRABLES:  I suspect your response to this lavish musical adaptation is how much you like the songs.  Since more than 60 million people have seen the stage show, there are probably many who do like them. Almost all the dialogue is sung, as well as many soliloquies. I think the melodies are fine (they’re from the small show this started as in France) but many of the English lyrics are dull. Some songs work anyway, like Anne Hathaway’s touching rendition of I Dreamed a Dream or the full-chorus anthems sung on the barricades later on. There’s banal stuff between the high points though. Luckily big stars, the mammoth presentation and that classic story will keep you interested. Ultimately this is a show of strong emotions and the film delivers them triumphantly. 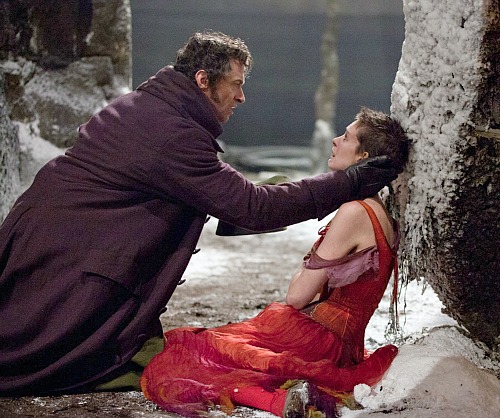 The actors do their own singing. Hathaway, Hugh Jackman and Eddie Redmayne are strong singers. Russell Crowe, Amanda Seyfried, Helena Bonham Carter and Sacha Baron Cohen come in somewhere behind them.   But they all come across as natural because they’re were actually singing what we hear as the camera was rolling. That, along with the splendid sets, backdrops and costumes and the able direction by Tom Hooper (last of The King’s Speech) bring this material across. 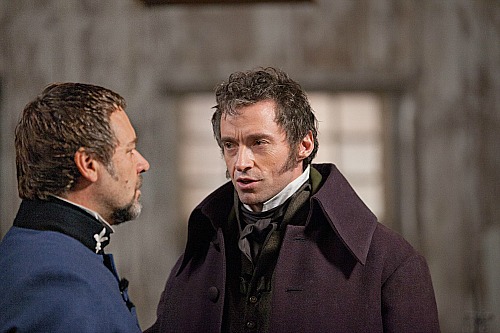 I do have one major complaint, and it may in fact be of the stage show. Victor Hugo’s novel is about the effects of poverty. Jean Valjean is sent to prison (a ship’s galley actually) for stealing a loaf of bread. With extra time for several escape attempts, he served 19 years. The film starts with him (Hugh Jackman) already in the galley and only mentions and doesn’t show the injustice that sent him there. I think that lessens that main theme, cuts the menace of the persistent cop Javert (Russell Crowe) and weakens the point of the revolution that starts up in the last hour.  For me that means this film, although alive with movement and events and visually dazzling, just misses being great. (The Ridge, The Dolphin, Scotiabank and suburban theatres right up to Chilliwack) 4 out of 5

DJANGO UNCHAINED:  For the longest time (probably about two hours out of it’s 2:45 running time) I was enjoying this film. It’s bold, in your face, and immensely entertaining. Quentin Tarantino invokes both spaghetti westerns and a lurid bit of American trash called Mandingo to look at slavery in the U.S. a couple of years before the Civil War. It’s not a serious examination. The film is more of an adventure set at the time of slavery.  A German dentist -cum bounty hunter (Christoph Waltz) buys a slave (Jamie Foxx) who he thinks can identify three men he’s looking for. He frees him, takes him on as a partner and then agrees to help him find his wife. She had been sold separately to break up the marriage. 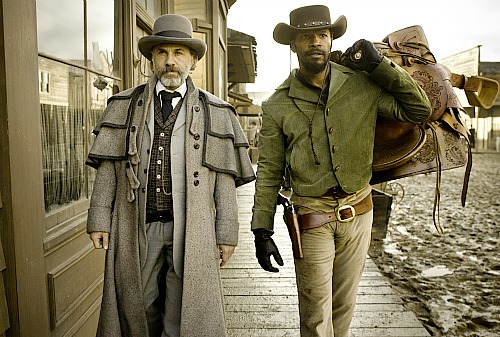 Foxx is taciturn; Waltz is cultured and articulate and when he learns the wife has been taught German and is named Brunhilde (although corrupted into Broomhilda) he tells the story of the mythic German hero Sigfried to compare and inspire.  Odd bits like that spice up this film. There’s a comic sequence, for instance, of KKK riders who can’t see properly out of the eye holes in the sheets over their heads. The n-word, so beloved by rappers, is heard dozens of times as whites rail against the free black man. The view of slavery is pure stereotype. Every back is covered with welts from the whips. Every trader is a slobbering creep and the owner of a plantation called Candyland, played by Leonardo DiCaprio, is a psycho. He breeds bare knuckle fighters and spouts racist theories. He’s also got Django’s wife captive and naked in a box. Tarantino revels in laying on details like that for sensation’s sake. 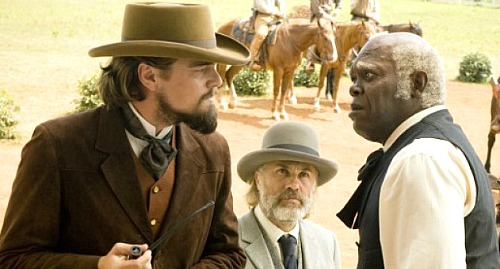 A far more authentic detail is Samuel  L. Jackson’s role as a house negro. He’s the ultimate Uncle Tom, relishing the power and influence he wields.  It’s an unusually subtle and helpful element in this story. It doesn’t last though because Tarantino then flips out and stages the most blood-spurting gun battle I’ve ever seen.  It’s not even the revenge scene that’s pretty well mandatory in his films. That comes later and is a bit cleaner because it includes dynamite at a distance. No, this is up close and protracted and not proper fare for Christmas or so soon after the Newtown mass shooting. This is the culture of violence in entertainment that both gun-control activists and now the NRA complain about. It turns the later parts of this fun, well-made and even brave film kinda sour.  (5th Avenue, Scotiabank and many suburban theatres)  3 ½  out of 5

PARENTAL GUIDANCE:  This one could be fun, or dreary. It wasn’t previewed for The Vancouver Observer so all I can say is that Billy Crystal and Bette Midler find humor and anguish over conflicting parenting styles. They play grandparents looking after some kids with very modern ideas.  (International Village and suburban theatres)

NOTE: All images are movie stills provided by the studios and are therefore the exclusive property of their copyright owners.