Four good ones at VIFF take us to The Vatican, India, the Arctic and Hong Kong:

Filmmaker Anand Patwardhan digs deep into the history, inspiration and activities of the radical Hindu movement known as RSS. It operates as various separate groups. There’s an ashram in Goa where a secretive hypno-therapist teaches meditation and “self-defense” with guns. Remember the Muslim family attacked by a mob after a Hindu priest announced they were eating beef? The film has that priest, explaining that “they” made him announce it but not saying who “they” are. The film does give the names. It documents the killings of several activists, a Communist party leader and a journalist who exposed the nationalist movement and its ties to the current national government. It calls Hindu thugs “cow vigilantes,” has video showing their campaign to create a Hindu state and many demonstrations by students opposing them. Gandhi was killed for being accomodating to Muslims, the common knowledge says. The film proves he was killed for trying to remake India’s class system, the Brahmin culture. His fight continues in many ways, as you’ll see and learn.

ONE DAY IN THE LIFE OF NOAH PIUGATTUK: The new one from the team that gave us Atanarjuat: The Fast Runner, including the director Zacharias Kunuk, is another clear-eyed examination of life in the far north. This one is more languid and relies very much on a series of conversations. They are compelling though and reveal precisely how colonialism looks. This is based on a true story by the way; there’s a clip of the real Noah attached at the end. 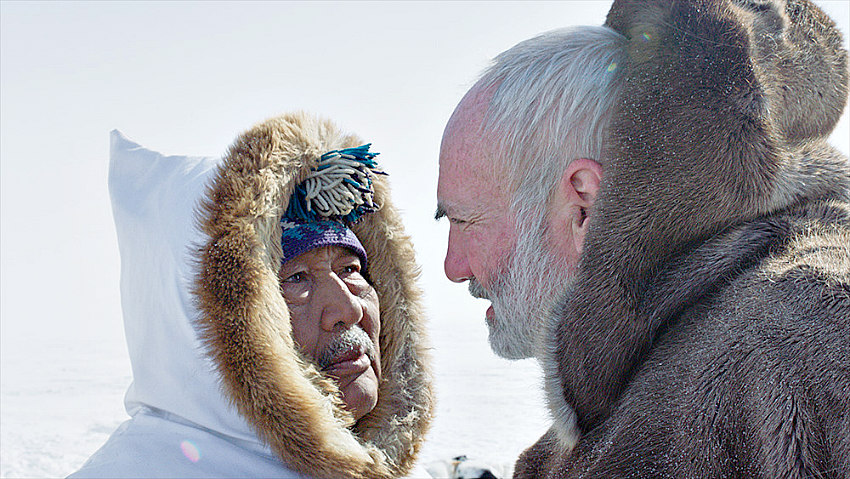 It opens with an Indian family casually having tea. That starts the film off slowly, maybe deliberately prepping us to expect fine pictures, Baffin Island snow and such, but not much speedy action. Noah and two  others go out on their dogsled to hunt. They spot another sled in the distance, then realize one of the two men on it is white and immediately understand they’ll be under supervision yet again. When they all sit down to talk, Noah (played by Apayata Kotierk) is being asked by a Canadian government representative (Kim Bodnia) to, in effect, give up his traditional way of life. He’s to move to a settlement, as part of a program Canada did enforce on Inuit people back in the 60s. They talk at length about what that means. He’ll have to follow rules; he’ll get family allowance in return. The talk through a translator is marred by mistranslations, misunderstandings and mistrust but they converse on and try to overcome all that. It’s a very credible version of how interchanges like that went, and probably still do. There’s good will on both sides but a divide that’s awfully wide. Its fascinating to watch it portrayed like this. Screens Mon evening and Wed afternoon.

NO. 7 CHERRY LANE: We used to calls work like this trippy. This is stream-of-consciousness storytelling with more attention paid to mood and atmosphere than spinning a narrative. We move forward and backward in time abiding bewilderment, confusion even, now and then. But it’s stylish, animated and fun to watch anyway and it won the best screenplay prize at the Venice Film Festival.  Careful, there are slow parts.

It’s written and directed by Yonfan, a Hong Kong veteran who seems to have taken 10 years off before jumping into a new medium for him: animation. There are dreams, usually erotic, some admiring of male physiques at tennis and in a shower, and then a young man’s fantasy relationship with two women: a student and her mother. Ziming is a tutor trying to teach English literature to Mrs. Yu’s daughter Meiling. She’s slow appreciating  Jane Eyre; he reads Proust’s Remembrance of Things Past himself, a stark try at inserting symbolism into the film. The streets outside are full of demonstrators (the anti-British types who marched in 1967, not the anti-Beijing protestors of today). Mrs. Wu says revolution is old hat for her; she was there for the real one. Ziming takes her to the movies where they watch Simone Signoret films (neatly duplicated in animation) and get their hormones up. What it is all supposed to mean isn’t obvious except possibly as a scattering of thoughts on history, desire, changes in society and of course, the movies. Go for the imagination and nostalgia.  It screens Tues evening and Thurs afternoon.