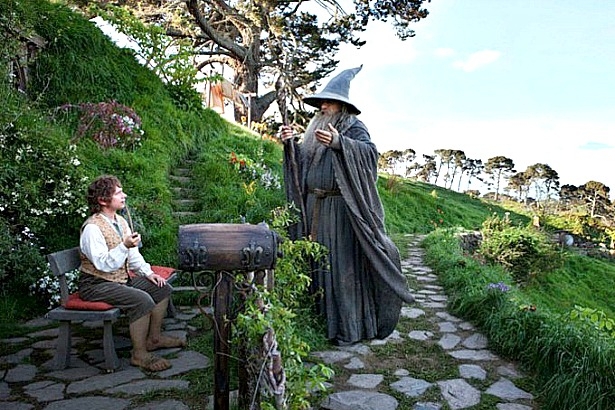 Before Lord of the Rings, there came The Hobbit. More adventure with some favorite characters.

Most everybody else stepped aside. The Hobbit owns this week and Lord of the Rings fans are poised. For other movie goers there’s some presidential hanky panky from FDR and some great animated films from Japan.

Hyde Park on the Hudson:  3

THE HOBBIT: AN UNEXPECTED JOURNEY:  Peter Jackson demonstrates how hard it is to re- capture the magic when you’re following a work as grand as the Lord of the Rings trilogy. He tries well enough, taking us into the same fantasy world of dwarfs and elves and hairy-footed hobbits and sending them  out of their comfort zone into territories where trolls, goblins and orcs strut about. He again wrangles dazzling special effects and goes a step  further by using a new double-speed film technique to deliver a sharper, crisper picture (in 3-D yet). He also underlines the connection to what came before by bringing back a few characters for short cameos: Frodo (Elijah Wood), Galadriel (Cate Blanchett),  Saruman (Christopher Lee) and Bilbo Baggins (Ian Holm) who sets this film in motion by recalling an earlier adventure.  However, it’s long (166 minutes), bloated and only intermittently exciting. 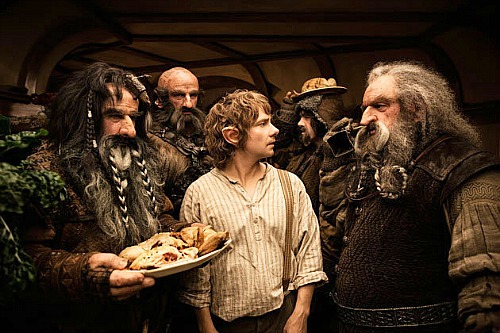 Bilbo, at 60 years younger, is played by Martin Freeman with just the right comfort-loving, stay-at-home reticence.  Ian McKellen, back again as Gandalf , presses him into a mission anyway. He’s to help 13 dwarfs take back a mountain kingdom they had lost to a dragon. They’re a motley bunch and mostly forgettable, except for their leader, an ultra-serious warrior named Thorin Oakenshield (played with authority by Shakespearean actor Richard Armitage).  His scorns Bilbo as too peaceable for the job. 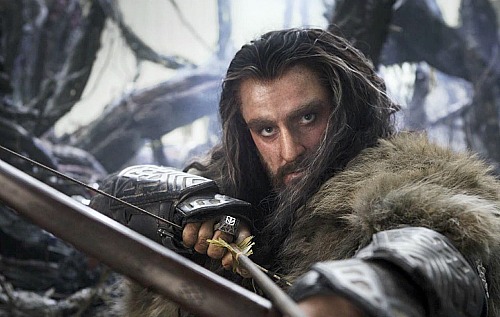 This first film (of three) gets the troupe within sight of the mountain. On the way they’re hunted by trolls, imperiled in a rock storm, plunged down a mine shaft and beset by other dangers that aren’t nearly as thrilling as that list sounds. The visuals are excellent but there’s too much filler in this story and the middle sections drag.  Thrills do come, near the end for instance, when the orcs drive the dwarfs up some trees at a cliff and their snarling wargs, those wolf-hyena-hybrids, come to topple them over.  I also liked Bilbo’s riddle contest with Gollum (Andy Serkis) and a rock-throwing attack by fighters made of stone. Other battle scenes jump out without any buildup or suspense and play out chaotically. Theatres are showing it in a variety of formats. Neither the 3-D (good) or the double-speed 48 fps projection (hard to watch at times) are necessary.  (The Park, Dunbar, Scotiabank and suburban theatres everywhere).  3 out of 5

HYDE PARK ON HUDSON:  Ever since it debuted at the Toronto Film Festival three months ago, this peek into Franklin Delano Roosevelt’s private life has drawn a widely-divergent reaction from  “cinematic artistry” (Red Reed) to “dreadful” (Time magazine). I’m somewhere in the middle. The film is sunny, interesting as a backgrounder and more hinting than outright lurid about FDR’s assignations with women other than his wife. Eleanor, it says, lived separately in a house she shared with other women. Franklin took his cousin Margaret Stuckley for a drive and had her attentions while parked in a field. That started an on-going relationship which Conrad Black, who owns the letters they wrote to each other, says is overstated and speculative at best. An ongoing fling with a secretary is more probable, he says, but still not as definite as this film suggests. The truth? Who knows? 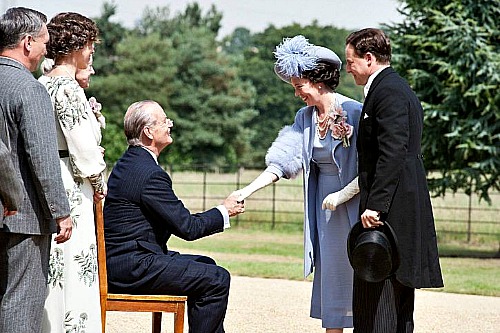