Sharing a footbath with a black man was actually a strong statement against laws that segregated swimming pools. He talked about divorce, death and after MLK and RFK were killed, assassination. Even the make-believe land at the end of the toy trolley line illuminated issues, isolation for instance, as when King Friday wanted to cut himself off by building a wall. (No contemporary reference stated, but I couldn’t help thinking of one.) Rogers created a gentle ambience on his show because he saw that most children’s entertainment on TV was loud, abrasive and even violent.

This documentary by Academy Award winner Morgan Neville gives us many clips from the show, from interviews he gave and affectionate memories from people who worked with him and from family members, his wife, sister and two sons. It seems he was just as nice in real life as he came across on TV. Nothing negative comes up. Just a bit of bossiness, somebody mentions, like King Friday. We see some spoof parodies and, at his 2003 funeral, some misguided protesters. No mention of his Toronto connection, though. He created his show at the CBC there and after three years took it back home to Pittsburgh for another 33 seasons. The film is a moving tribute to his achievement. (5th Avenue, adults only remember) 4 ½ out of 5

THE GIRL IN THE FOG: Here’s what can happen when an author adapts his own novel and directs the film version. There’s not enough actual adaptation and the director thinks the audience knows what he knows and what he’s trying to communicate to them. This story from an Italian novel, a best seller by Donato Carrisi, is complicated and easy to lose. It takes twists, opens up new revelations along the way and doesn’t show some important incidents, only alludes to them. I had to watch it twice to get it straight. See it, but pay attention. It’s subtitled and very complex.

A young woman disappears one foggy night from a mountain village in northern Italy. Tourists don’t come there anymore but when a celebrity cop (Toni Servillo) arrives to investigate, people and media flock in. He seems to have a TV show, hence his fame, and a know-it-all air about him. He’s also got a cautionary message for the local police: the reporters are going to be much more adept than they at digging up facts. They don’t even have to be true. It’s an intriguing view of the effect that a hustling media can have in a small town.  He provokes it himself to stir the pot and dredge up information. But with a teacher as a possible suspect, rival investigators and reporters, echoes of two previous investigations getting in the way (one decades old) and a psychiatrist (Jean Reno) hearing about all this in an elaborate flashback, you’ll be challenged to follow it all. Give it a try, though. As a puzzle. (VanCity Theatre) 3 out of 5

SUPERFLY: Blaxploitation is back. There are new films like Proud Mary, remakes like the upcoming Shaft and this one, a repositioning of one of the key films of the genre. It’s not set in Harlem, like the 1972 version, but in Atlanta. The music is different, more rap and only one of Curtis Mayfield’s classic songs. But the plotlines of crime, violence and sex are intact, though with far less actual drug use shown because the director, who calls himself Director X, didn’t want to glamorize it. (He’s Canadian-born, maybe that’s why).What he does do is interesting: he brings the images full-circle. The clothes, the bling, the power strutting came from these movies to rap videos and are back in the movies. 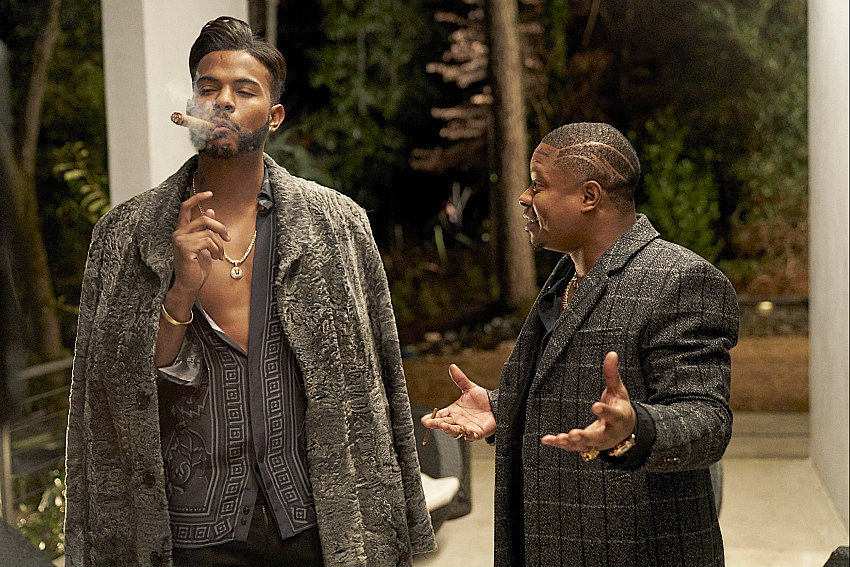 X is known for the videos he’s made for Drake, Rihanna and others and he shows flamboyance here with party scenes, flashy living quarters and lots of tossing of money up in the air. Our main character takes a shower with not one, but two women. Now there’s a status symbol. He’s a young drug dealer named Priest, played cool by Trevor Jackson. Along with his best pal played by Jason Mitchell he works hard selling cocaine, growing his territory and then makes a direct connection with a Mexican cartel boss to get the supply. A rival fights him and two crooked cops come after him. They’re white, of course and the worst is a woman. (Two contemporary cocerns in one movie). The film is violent (wait’ll you see the second last scene), lurid and grandiose. But a meaningful fantasy too, for some. (International Village and some suburban theatres) 2 ½ out of 5

TAG: Here’s a true story: first reported by the Wall Street Journal and now a movie with Ed Helms, Jon Hamm and Jeremy Renner. They’re grown men who every May for over 30 years have played a game of tag. Company boardrooms, weddings, whatever, wherever, the game resumes. I haven’t seen it (the previews conflicted with important movie screenings) but I have two interim impressions. One man tells me it’s somewhat funny; another wrote that it’s “vulgar”, “grotesque” and not funny. Take your pick.

BEAST: Haven’t seen this one either but am more interested. Suspicion and desire play off against each other for a young woman on the Island of Jersey when two young outcasts fall in love. For her, he represents a potential escape from her controlling family. He comes under suspicion as a serial murderer. She defends him, but is she right? The reviews have been quite positive, like at The Stranger in Seattle which calls it “intoxicating and claustrophobic—a swirling vortex of desire and denial.” It’s also been popular at film festivals.  (International Village)