Kong is big but unremarkable, Window Horses is diverse and whimsical and The Last Word welcomes back Shirley MacLaine 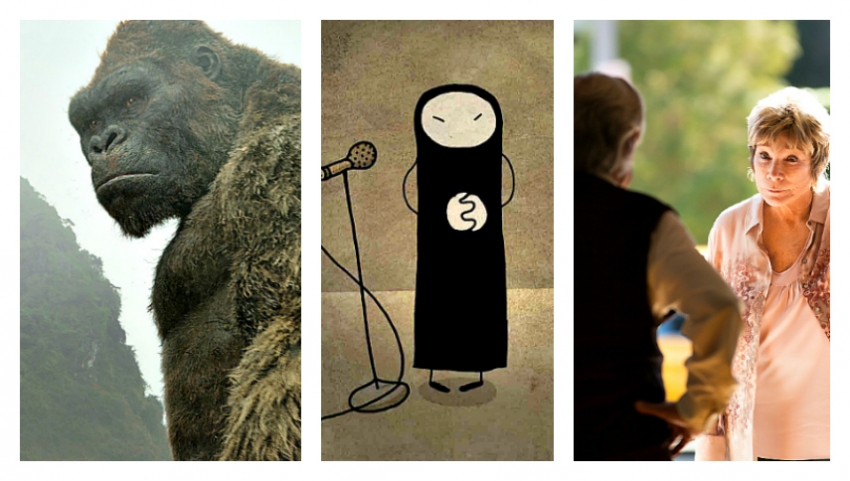 Canada’s counterpart to the Oscars, the Canadian Screen Awards, are on CBC TV Sunday night. They've  nominated It’s Only the End of the World in nine categories (way too many). The five for Old Stone are well-deserved as are the 4 and 3 respectively for a couple of BC films: Hello Destroyer and  KONELĪNE: our land beautiful. But a more telling measure of the Canadian film industry may be in the Golden Reel Award sponsored by Cineplex. It recognizes the film that made the most money. Once again it’s from Quebec, Les 3 P’tits Cochons 2 (The 3 Little Pigs 2). Around here, as far as I know, it has only played at the Whistler Film Festival back in December.

Also the Women in Film Festival continues through the weekend at the VanCity Theatre and concludes Sunday night with its own awards. The pitch session to get your story ideas evaluated is today. Check out http://www.womeninfilm.ca/ for more information.

There are four new films in the regular theatres.

All Governments Lie: Truth, Deception, and the Spirit of I.F. Stone  4 stars

KONG: SKULL ISLAND: I was primed to like this one because a guy who had already seen it raved about it. Great fun, he said. Not my reaction. Some fun, I’d say. And a lot of missed opportunity. That sense of wonder, for instance, and discovery that made the 1933 King Kong so engaging and also, in varying degrees, drove the 1976 and 2005 re-makes. It’s not there. This time there’s no waiting, no build-up of anticipation and tension. It doesn’t take more than a couple of minutes before Kong pops up in a pre-credit sequence. And he’s just big that’s all, two to four times bigger than any of his predecessors. The director, Jordan Vogt-Roberts says it’s a sign of the times; audiences need that. Kong is very good at swatting helicopters out of the air and crushing them with his giant hands but his personality isn’t shaded in like before.

The special effects are outstanding; the story not so much. It’s the early 1970s. A shady scientist (John Goodman) organizes a trip to a recently-discovered island where, he says, ”God did not finish creation” and despite that intriguing prospect, a rather conventional adventure film plays out. With him there’s a bar-fighting Englishman (Tom Hiddleston), a mildly-spunky photographer (Academy Award-winner Brie Larson) and a troop of soldiers re-assigned after the Viet Nam war with a still-bitter leader (Samuel L. Jackson). They meet spear-carrying natives, a lot of extra-large creatures (there’s a gruesome impaling by a huge spider) and another American (John C. Reilly) who’s been on the island for over 25 years, spouts a bunch of funny lines and serves as a guide. Without him this would be tedious.

There’s a brief ecological debate (whether to kill Kong or recognize that he keeps the really bad creatures, called “skullcrawlers” in check). The climax has a big fight with them. The story does not get to New York and the big guy has one small scene, not a full-fledged infatuation, with Brie. This is a spectacle and sequels are coming. (5th Avenue, Scotiabank, Marine Gateway and suburban theatres everywhere) 2 ½  out of 5

ALL GOVERNMENTS LIE: TRUTH, DECEPTION AND THE SPIRIT OF I.F. STONE: This is the film to see this week even if you’ve never heard of Stone or his dictum about never trusting governments. You’ll learn a bit about his work and a lot about people who’ve been inspired by him. It makes a clear and ringing statement about why we need a courageous news media. That’s true now more than ever. News clips of Donald Trump offer some absolutely up-to-date proof of that.

The film starts with Richard Nixon’s “I am not a crook” speech and Colin Powell’s weapons of mass destruction “proof” at the U.N. to show both good work and bad. The media did its job with Nixon but did not challenge going to war in Iraq. Stone would have. Until he died in 1989 he published a newsletter with what he found going through documents and reports, not White House press conferences. He exposed the Gulf of Tonkin incident for instance which was used to start the Vietnam War.