Locally-filmed The Predator, a mommy blogger’s Simple Favor and bad blood Under the Tree

This is a tightly women skein of irritations. The tree-loving woman bristles at the arrogance of the neighbor’s new young and blonde wife who insists the tree is coming down. It impedes her sunbathing, you see. The woman calls her a cow and in return is called “a cycling bitch.” Before long tires are slashed, a dog is dead, the condo council can’t settle things and, when a beloved cat goes missing, things spiral out of control. That’s only the bare bones of the story. There’s also a married son whose wife has thrown him out, which is a side bar story but adds to the commotion. Hafsteinn Gunnar Sigurdsson, the director keeps all these elements bouncing properly and this minor spat artfully grows into a major backyard squabble. You’ll recognize one of the actors, Sigurður Sigurjónsson, from another very good film from Iceland, Rams, which played here two years ago. (VanCity Theatre) 4 out of 5

THE CAKEMAKER: There are multiple differences that have to be overcome in this relationship drama. He’s German; she’s Israeli. He’s Christian, presumably a Protestant, and she’s Jewish, though insisting she’s not religious. And the big one: he’s been having a sexual relationship with her husband. Can one with her have any chance of working out? The film positions all these problems so well, somewhat clichéd but bearable, that it’s been a major award winner in Israel and that means it’ll be that country’s submission to the Academy Awards.

Meanwhile it’s a deeply felt and moving exploration of the need to connect and overcome loneliness. Tim Kalkhof plays a pastry chef in a Berlin konditorei where a young Israeli man always visits on his monthly business trips. They become lovers; the Israeli dies in a car accident back home and the German travels to Jerusalem to get to know his widow (Sarah Adler) and son. She runs a café that’s not doing well. He gets a job washing dishes, then baking pastries and the customers come in numbers. Another complication: Kosher or not. Her brother-in-law gets testy on that point but we’re  absorbed by the bigger issue: how will she react when she learns the truth about the cakemaker and her late husband? The film plays that out calmly and with reserve. Both lead actors are very good, especially Kalkhof who has to play his role low-key. He’s not acting. He’s just there. This Israel-Germany co-production is by Ofir Raul Graizer who is Isreali-born but works internationally. He also teaches cooking classes. (VanCity Theatre) 3 ½ out of 4

MANDY: Mild title, but beware. This is the most violent film I’ve seen all year. It spills blood with grim glee, oozes sadism and features a performance by Nicolas Cage that takes the concept of unhinged to a brand new level. In other words, he’s in his element here though you might feel grossed out by what he’s up to. 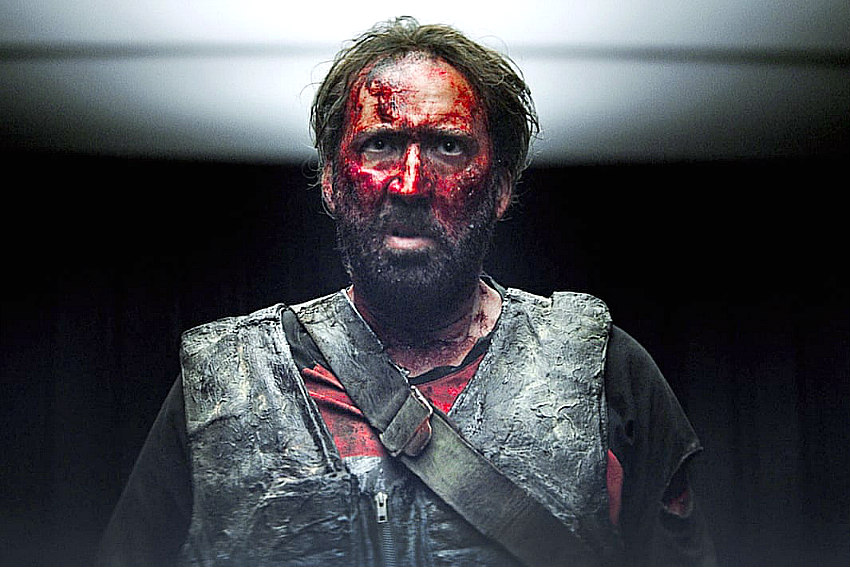 Revenge is the word. He plays a logger who lives quietly with Mandy (Andrea Riseborough) listening to metal and watching horror videos until a bunch of Jesus freaks show up and their leader (Linus Roache) decides he must have her. “I feel naked without her,” he says and with a horn summons some demon bikers who bring her to him. Things get even weirder, when Cage fights, stabs, impales and garrots to avenge.

The cult leader is a failed musician. The critics didn’t like his masterpiece of an LP and Mandy didn’t help when she laughed at his music. He’s got a Jesus complex, brought on when he was fed some bad LSD sometime in the past. Now he believes he can take anything because it’s all his. Roache gives a creepy performance in a film that gets trippy with flashbacks and visions, animated sequences and for some reason I can’t figure out, a tiger in one scene. Quite remarkable and preposterous in its weirdness, as written and directed by Panos Cosmatos, the Victoria-born, Vancouver-local who made a much admired cult film Beyond the Black Rainbow a few years ago. This is for the same crowd. (His father made the second Rambo film, and others) (Park Theatre and a couple of suburban theatres) 2 ½ out of 5

THE CHILDREN ACT: I haven’t seen it but I’m told it’s a potent tearjerker with excellent performances. Emma Thompson plays a judge in England who has to decide whether or not order a blood transfusion for a teen whose parents oppose it on religious grounds. There’s a particularly emotional scene when she visits the boy in hospital. (5th Avenue and a few suburban theatres)

WHITE BOY RICK: A strong cast and an even stronger story drive this film but I’ve seen mixed reviews on it.  Matthew McConaughey, Jennifer Jason Leigh and Piper Laurie are in it but at the centre is newcomer Richie Merritt as Rick Wershe Jr. who at age 14 became a drug informant for the FBI in Detroit, at 17 was arrested for cocaine dealing and has been in prison for more than 30 years. (The parole board has just announced he’ll be released in two years, at Christmas.) The director, Yann Demange, made the superb Irish-troubles film ’71. (International Village and suburban theatres)