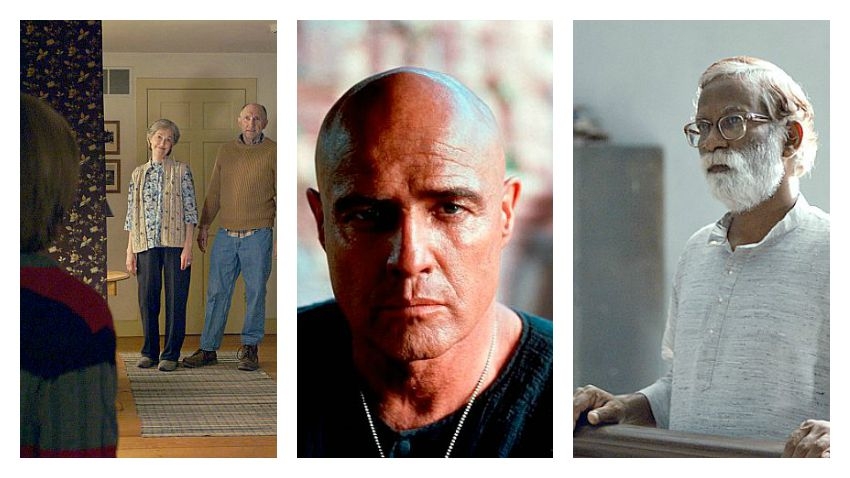 It’s a slow week at the movies but it’s brought two very good ones:  Court and Listen to Me Marlon

Now that September is in full swing, people are going back to school, back to work. Not so much time for movies. Maybe that’s why so few new ones come around the first half of September. Luckily, two that have just arrived are excellent.

Read about them all:

The Perfect Guy: not reviewed

THE VISIT: Who would give M. Night Shyamalan money to make another movie? Good question, asked by my wife. M’s taken a critical drubbing for several of his recent films and it’s a long time since The Sixth Scene made his name. Apparently, there’s a good chunk of his own money in this one and, according to the end credits, another chunk from a Chinese company. He rewards them with a small, creepy thriller but hardly a triumphant return to his roots. It’s got too many missteps and not enough scares. 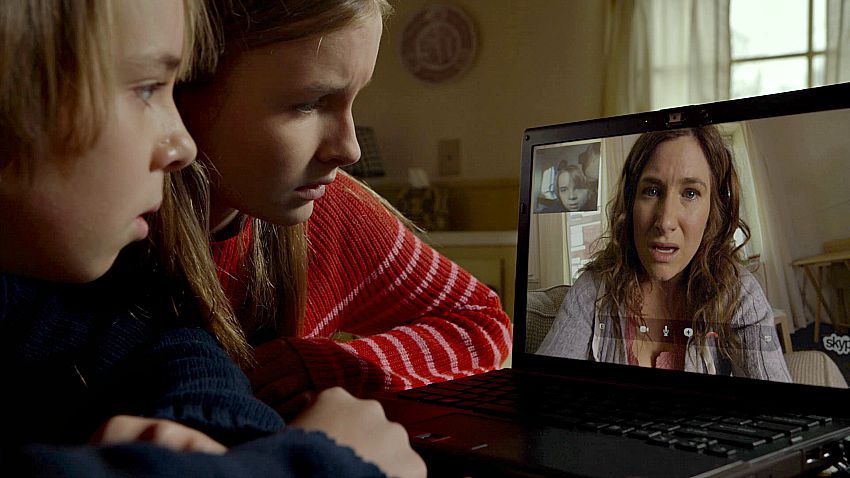 This one is built on familiar childhood fears conveniently amped up for impact. Mom goes off on a holiday with her boyfriend and sends her two teenage children (Olivia DeJonge, Ed Oxenbould) to spend a week with their grandparents (Deanna Dunagan, Peter McRobbie) . The old couple live on a farm; it’s cold and snowy and little by little oddities are revealed. What does gramps do in that shed? What does gran do at night that necessitates the teens never come out of their room after 9:30? Fear of old people is overdone in this story, sometimes for laughs. Her conduct is bizarre and we’re grossed to hear gramps is incontinent. You don’t want to know where M. Night takes that. What he does right is to give us his trademark twist much earlier than usual. The film doesn’t live or die by it. The chilly atmosphere is what lingers. (Scotiabank and suburban theaters) 2 ½ out of 5

LISTEN TO ME MARLON:  You’ll feel like you’re eavesdropping on some very intimate musings by Marlon Brando the great and sometimes controversial actor. But then, of course, you are. That’s his voice taken from some two hundred hours of cassette tapes he recorded and  only now, 11 years after his death, being heard publicly. Englishman Stevan Riley has fashioned an exquisite documentary using only that voice as narrator, lots of film clips and a few interview excerpts. The result is magnetic biography. 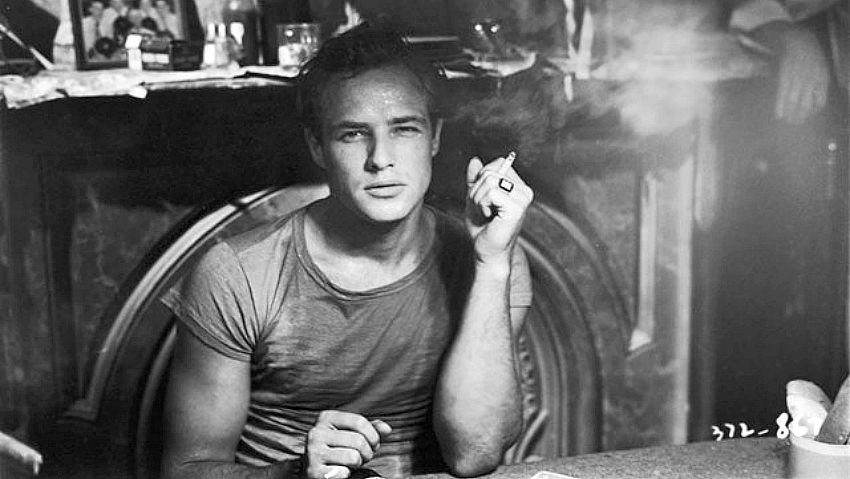 We get the highlights of course: The Wild One, Julius Caesar, On the Waterfront (he thought he wasn’t good in it), The Godfather, Apocalypse Now, Last Tango In Paris (it violated his privacy, he said) and the legendary battles over Mutiny on the Bounty that ruined his career for a while. We also get some of the lesser films and a few of the duds. Mostly, we get his thoughts on the craft of acting and his view of himself. That  includes his civil rights fervor but also quite a bit of insecurity stemming from a childhood with a drunkard mother and an abusive father. There’s little about some of his weirder habits (the title is from an alert to himself in a self-hypnosis tape) and only one of his three wives is mentioned and only two of the several children he fathered. So it’s incomplete but it’s also a startling and illuminating self-portrait. (VanCity Theatre) 4 ½ out of 5

COURT: This is a quiet but highly-involving drama showing how the legal system works in India. It’s a damning critique and sure to be of interest to anyone interested in law, justice and the residues of colonialism. It’s from Mumbai, in three Indian languages and some English, and a strong debut by a young filmmaker named Chaitanya Tamhane. He takes us into the courtroom and shows exactly what is being done wrong. 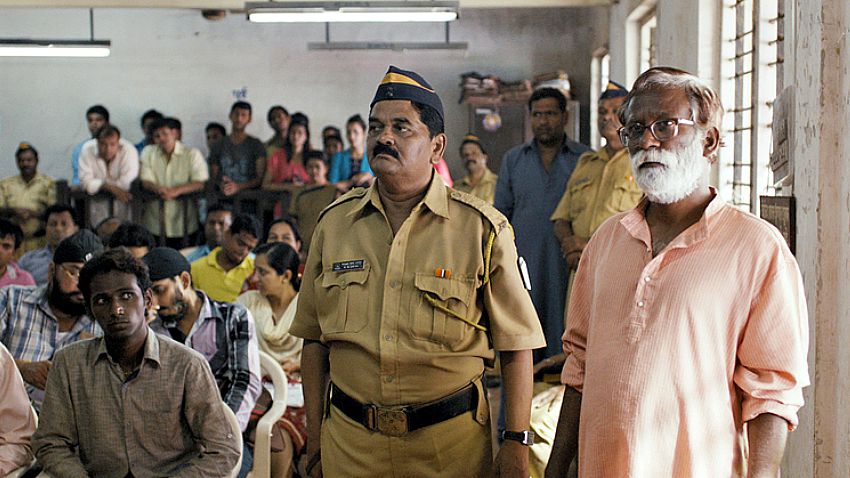 An elderly folksinger, known for performing at protests, is arrested and charged with abetting a suicide. A sewer worker had died on the job and a witness said he may have been driven to do it by a song he had heard . Nobody knows if he had even been there and the singer denies he performed such a song. The witness isn’t around to testify but that doesn’t seem to matter to the prosecutor. The singer had had run-ins with the law before and isn’t that proof enough? We get a detailed look at the misuse of legal procedures inherited from the British. Racism, class differences and a rush to judgment are eloquently depicted. The editing should have been tighter but it’s a strong, thoughtful film.  (VanCity Theater) 3 ½ out of 5

WOLF TOTEM: This is China’s submission to the Academy Awards so you would think the distributor would do more with it. Not so. The Sony Corporation held no previews or media screenings out here. Do they know about the sizeable Chinese audience around Vancouver? In the film, it’s 1967, the time of the Cultural Revolution. A student from Beijing is sent to Mongolia to live with nomadic herdsmen and witnesses their culture in decline. Wolves are a constant threat, but he adopts a cub.

The director, Jean-Jacques Annaud, also made The Bear (1988) and Seven Years in Tibet (1997). This new one took him several years because it took that long to train two packs of wolves. Here’s a fun fact: many of those animals were brought to Alberta after filming. The trainer’s business is based there.  (International Village and Riverport)

THE PERFECT GUY: This one was also not promoted here by Sony. It’s a dramatic thriller centered on a trio of middle-class American blacks. Maybe Sony figured there’s not enough of an audience for it here. More likely: the plot may be too trite. A woman (Sanaa Lathan) breaks up with her longtime boyfriend  (Morris Chestnut) over his reluctance to commit. She meets the perfect guy (Michael Ealy) who turns out to be not so perfect after all. So, does she go back or stay? (International Village and a few suburban theaters)