Manchester by the Sea, superb; plus the return of Warren Beatty and some girl power from Disney

Moana  gets encouragement from her grandmother, finds a hidden boat, and with the help of a fat demi god dares to sail. He (Dwayne Johnson) also sings, something about being just an ordinary guy. (His shape and his tattoos which comically reflect his moods are the main cause of the cultural objections). Together they search for a magic fishhook that he lost and try to return a magic heart-stone he stole from a goddess. High adventure follows: a storm, a boat flip, huge waves, lightning, all beautifully animated. Tiny pirates and a giant crustacean with a fondness for disco sounds bring comic relief. Directors Ron Clements and John Musker, veterans of previous Disney films, have sent us a treat. (International Village, Marine Gateway and suburban theatres) 4 out of 5

NOCTURNAL ANIMALS:  I have to agree with Anthony Lane in The New Yorker. I don’t know what this film is about either. I can tell you what happens in it, but that’s not the same thing. It’s a compelling one to watch however, with two stories that connect in uncertain ways. They start in after a bizarre opening in which some of the most obese women you’ll ever see dance full-frontally nude and not briefly either. The scene tells us this is a most avant-garde art gallery and the owner (Amy Adams) is bold. Not for long. She spends the rest of the film reading a novel that an ex-boyfriend (Jake Gyllenhaal) of 19 years ago has just sent her and dedicated to her. That story takes over the film, except for times when she comes up gasping for air. 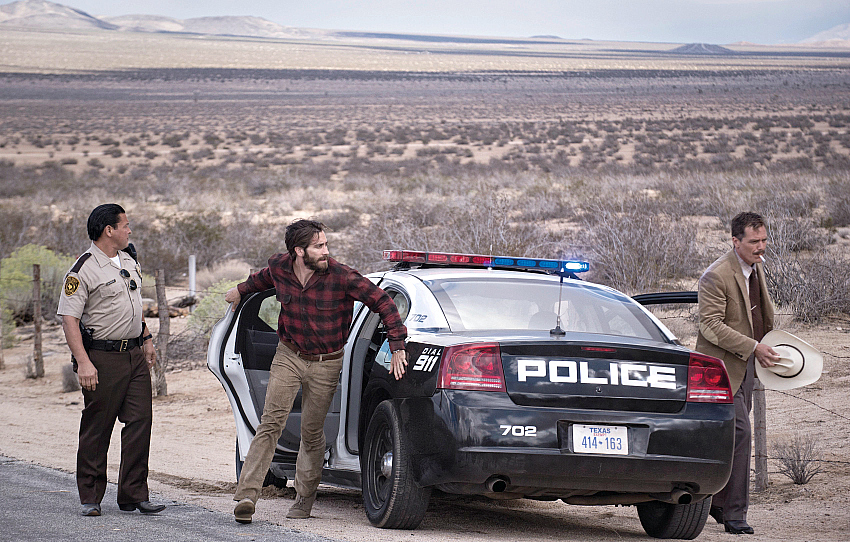 The events are harrowing. A couple (Gyllenhaal again and Isla Fisher) drive a desert road with their teenage daughter and get on the wrong side of a bunch of rednecks. They’re run off the road, intimidated and harassed. One car drives off with the women. The other takes him out on a dirt road where he manages to escape and get help from a world-weary cop. He’s played by Michael Shannon with his usual and perfectly-fitting gruffness. The lead redneck is played by a scary and grinning Aaron Taylor-Johnson. Tension alternates with anger. It’s a gripping second film by Tom Ford, who made his name in fashion design and directed Colin Firth to an Oscar in A Simple Man. He’s got two tales here, both nicely done but largely separate. (5th Avenue) 3 ½ out of 5

ALLIED: I don’t care what Angelina Jolie might have suspected. I never got the impression that her ex, Brad Pitt, had the hots for his–costar, Marion Cotillard, in this film. Even when they jump into bed, which they do several times, the chemistry isn’t strong. That’s important because the whole rest of the film depends on it. It’s a weaker film than it should be because of it. 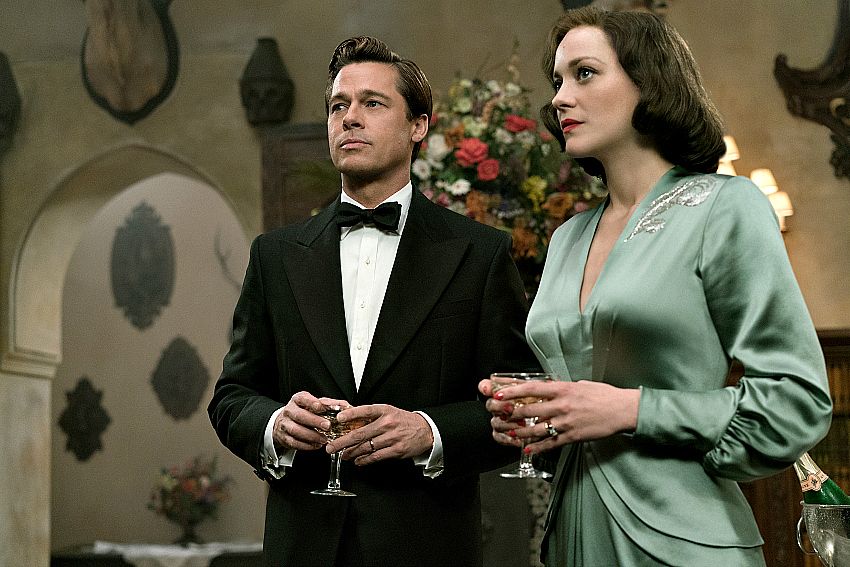 Pitt is a Canadian (a French speaker from Ontario who dreams of buying a ranch near Medicine Hat). Cotillard is French. They’re both agents during World War II sent to work together in Casablanca and take out a German ambassador. Naturally they fall in love, marry, have a child and settle down in England. But a heartless V Section official (Simon McBurney) intrudes. He says Marion is actually a German spy and sets up a “blue dye” test to trap her. If she is a double agent, Brad must shoot her or be shot himself. He is not allowed to investigate himself, but of course, does. His sleuthing is the most interesting part of the film. If there was real chemistry, the test and his search would mean more to us. As it is the film is slow to start and runs mostly tepid although there’s a surprise ending and the visual re-creation of the time is excellent. (International Village, Marine Gateway, suburban theatres) 2½ out of 5

BAD SANTA 2: OK, I’ll grant there was some funny stuff in the original film. Although I didn’t like it much, it became a cult favorite and now 13 years later there’s a sequel that nobody needs. It’s absolutely obsessive at trying to be even more crude and rude. And worse, it’s not funny. Oh, there was a guy sitting behind me who laughed at everything and apparently a woman across the room doing the same. For most everybody else there was a lot of silence, interrupted only occasionally by a few guffaws. I imagine some Trump fans may enjoy it. 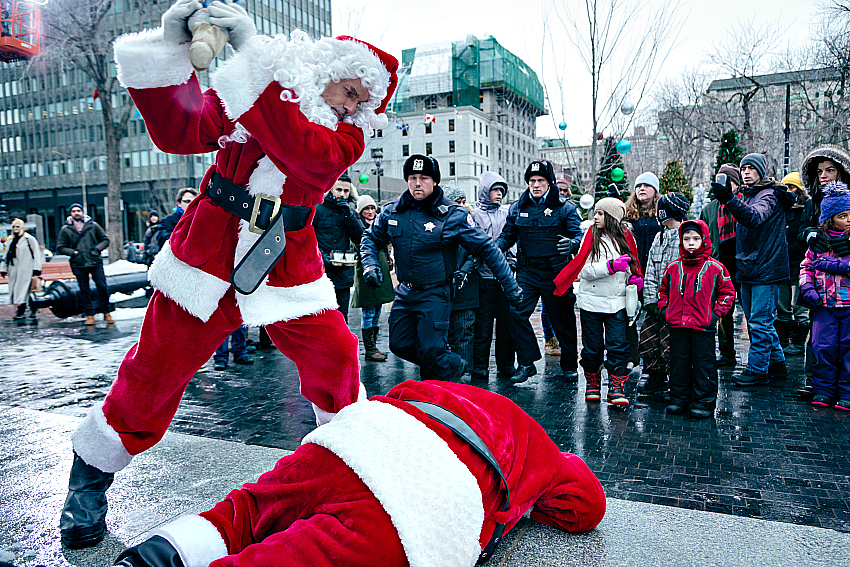 You won’t find anybody to like here. Not, Billy Bob Thornton, as a drunken misanthrope, Tony Cox, as his midget sidekick, or Kathy Bates (yes, the Academy Award winner) as his prison-familiar mother. She’s new to the cast but like everybody else her language is eternally foul and her comedy debases her. That trio conspires to rob a charity on Christmas Eve in Chicago (Montreal, if you look hard enough). The man who runs it is a thief, so that’s okay, and his wife (Christina Hendricks, ex of Mad Men) though pious is easily lured into sex in an alley and later into ecstasy with a backdoor version in a Christmas tree lot. Brett Kelly is back as the simpleton Thurman Merman, now grown-up and proud of his status as a “sandwich consultant” at a fast food joint. There’s a very low view of humanity here. (Scotiabank, Marine Gateway and suburban theatres) 1 ½ out of 5