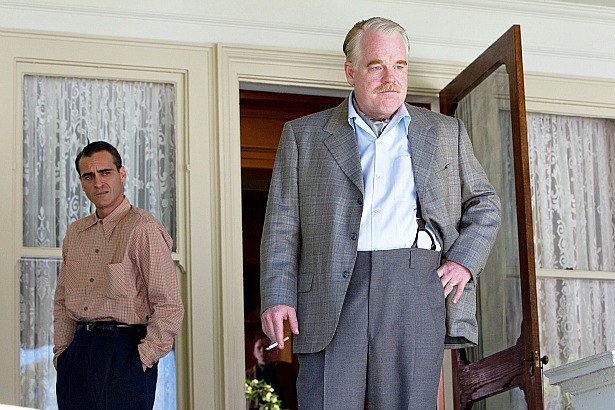 One of these movies is nearly perfect.

The Vancouver International Film Festival gets some tough competition just as it’s started up. Two superb Hollywood films, the Master and Looper, open in regular theatres here today. And don’t count out Pitch Perfect either.

THE MASTER: I don’t expect to see a better movie the rest of the year. This one is close to perfect. It’s rich with ideas and wonderful performances. Joaquin Phoenix plays an unstable drifter traumatized by World War 2. One evening he wanders onto a brightly lit party boat where Philip Seymour Hoffman as a glib spiritual leader presides over his daughter’s wedding, dispenses hushed observations on history and humanity and welcomes the former sailor with: “You’ve wandered from the proper path haven’t you?” He also takes him on as an aide and possibly a project. Man is not an animal he insists although his protege reverts now and then to attack the critics of the movement. The rest of the time he seems absorbed by the hokum about past lives and the need to expunge trillions of years of psychological wounds. 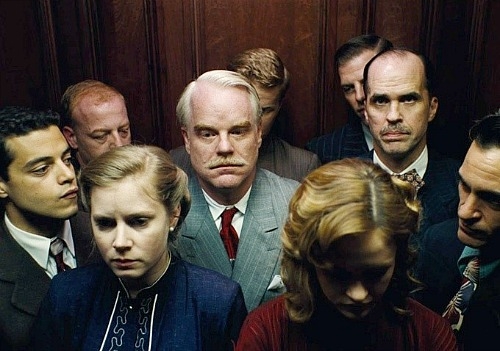 Sure it’s inspired by Scientology but we’ve seen charismatic charlatans before in the movies. Usually, like with Elmer Gantry, it’s to expose feet of clay. This film warns of all hucksters who claim to know the one right way. (Always valuable in an election year.) As with his last masterpiece, There Will be Blood, Paul Thomas Anderson has written a heady critique of the American way and directed it into a calmly dazzling motion picture. Phoenix is raw, gaunt and rough, Hoffman is smooth and confident, and Amy Adams provides mysterious backup as a wife with influence. (Park, Scotiabank and a few suburban theatres) 5 out of 5

LOOPER: There used to be rules in time travel stories. Don’t change the past is long gone. This film totally dispenses with Don’t meet yourself and makes up a new one to hinge an engrossing story on. In the future, which seems to be 2072, time travel has been perfected and banned. Only criminals use it and that’s to send people they want whacked some 30 years back in time where minions called “loopers” kill them.  Those bodies can’t be identified. Perfect crime. 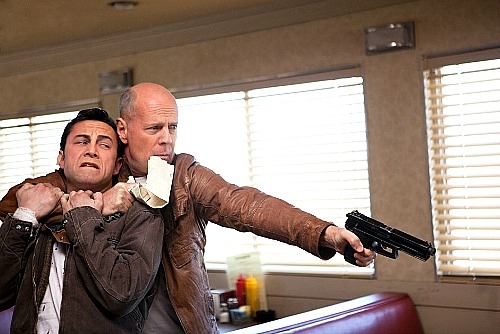 Joseph Gordon-Levitt receives his victims at the edge of a cornfield which is handy for the rest of the story. It seems somebody in the future is on a power trip and shutting down the system, or “closing the loops.”  That’s done by sending the looper’s own future self back in time for killing. Got that? Joe, who’s future self is Bruce Willis, can’t bring himself to shoot him. Bruce escapes through the corn; Joe runs too and ends up at a farm where Emily Blunt is a single mom handy with a gun and chopping wood. The film slows down a bit from then on but you know that other guys will be coming and the time conundrum will have to be resolved. Rian Johnson, who made the equally clever Brick, also starring Joseph Gordon-Levitt, manages to keep it all consistent and hold us absorbed. Gordon-Levitt does a perfect Bruce Willis homage. He’s got the mannerisms and that smirk right on. Jeff Daniels is a standout as a crime boss. (5th Avenue, Scotiabank and many suburban theatres) 4 out of 5

PITCH PERFECT: “We do not stray from tradition.” That line could be in any of a dozen movies in which a new comer to a group challenges the established leader and shakes things up. Here we get that familiar plotline in the sphere of a cappella singing. A college freshman (Anna Kendrick) who really wants to be a DJ but is deterred by her professor father, joins a singing group run by uptight Anna Camp, who suffered an embarrassing vomiting incident at a national competition the year before. They’re going back this year but how? Doing the same tired songs or with a new act? The two women face-off at the first rehearsal and again through the preliminaries and into the final.