The Monuments Men, The Lego Movie and celebrations of animated films, special effects, the outdoors and Jean-Luc Godard

FERAL is an artful and sensuous vision in a minimalist black-white-grey drawing style about a boy who lived in the wild brought to civilization. He cowers at school when the kids laugh. He has to be restrained when he prances on all fours. Howling wolves in the snow draw him. A moody chilly film which starts with a bloody scene of wolves feeding on a deer.

POSSESSIONS is a Japanese film built on a legend that after 100 years ordinary objects develop souls and trick people. A hunter taking shelter in a cabin has to deal with umbrellas, pictures and a mound of stuff that falls out of a closet. Colorful, but enigmatic.

ROOM ON THE BROOM is my favorite and the longest. Well known British actors (Simon Pegg, Gillian Armstrong, Timothy Spall, Sally Hawkins and others) do the voices for a witch and the creatures she transports on her broom. This one has a Dr. Seuss-like charm with a particularly English sensibility. A dragon chases them at one point wanting to eat “witch and chips.” It’s based on a children’s book.

(VanCity Theatre) Cumulative rating: 3 ½ out of 5

GODARD RETRO:  Jean-Luc  Godard, a key member of France’s New Wave, is one of the most important filmmakers of the last 50 years. The Cinematheque which is presenting a major retrospective of his films, says in the accompanying notes that he’s themost important and influential.  Here’s a chance to catch many of his films, 15 now, the rest later this year.  In this first batch you can track his semi-surreal style from his first hit, and series opener, Breathless, inspired by Hollywood b-movies, to his salute to Maoist radicals, La Chinoise. Among the others, there are Alphaville (1965), Pierrot le fou (1965) and Weekend (1967).The series runs on various days scattered through the next month. Check the website: http://thecinematheque.ca/jean-luc-cinema-godard

It was only able to preview an odd one, FAR FROM VIETNAM in which Godard and six other directors had their say about that war. His segment is rather mannered. He’s working a camera and explaining that since the working class doesn’t go to his films, he feels estranged from them and wants to overcome that.

The rest of the film, though, is perhaps the most radical take I’ve ever seen on the war. The rich against the poor, it’s characterized. The US, according to one segment, trying to snuff out popular revolutions after its inability to turn Cuba. There are special appearances by both Ho Chi Min and Fidel Castro and excerpts from a famous film shot by model-turned-filmmaker Michele Ray in Viet Cong territory. 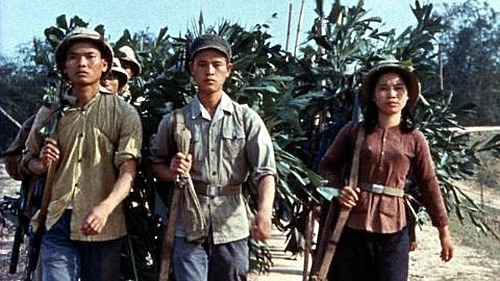 There’s Tom Paxton singing a hostile song and vibrant demonstrations and street side arguments in Paris, New York and Washington. A couple of segments are clumsy, but over all it’s a reminder of how outrageous and criminal that war was.  (Cinemathque)  3 ½ out of 5

VIMFF: The Vancouver International Mountain Film Festival just keeps growing. It's showing some 80 films over the next week. They're of varying lengths, some as short as 3 minutes, but they all deal with the outdoors, not just mountains. Kayaking, sailing, surfing are also included, along with a lot of cycling.

THE ESCAPE has two bike riders from Whistler circumnavigating the Strait of Georgia. 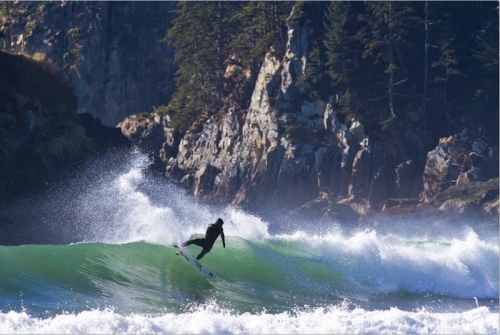 THE FORTUNE WILD has three surfers travelling in Haida Gwaii.

Two films, which I have seen at other venues, are defintely worth catching. MAIDENTRIP (4 stars) shows the round-the world sail by Laura Dekker, the youngest woman ever to do that solo. And THE SUMMIT (3 stars)tries to find the reasons behind an infamous mountain climbing accident.

This 17th version oif the festival happens at three venues: The Cinemathque, The Rio and the Centennial Theatre in North Van. Details at www.vimff.org

SPARK FX: The annual celebration of special effects is back, part conference, part job fair and part film festival . Appropriately, because the special effects industry is booming in this city. Daytime events feature major innovators who worked on big films from Avatar to Wreck It Ralph. Visual effects guy John Knoll, of Industrial Light and Magic for instance, won an Academy Award for his work on Pirates of the Caribbean: At World’s End.

In the evening and on the weekend some choice examples of this artform are screening. Sunday looks great with not only two of the original 3D features, Creature from the Black Lagoon and House of Wax from way back in the early 1950s, but also the recent conversion to 3D of The Wizard of Oz. It been highly praised for the new clarify of it images.

VAMPIRE ACADEMY: High school vampires again. Oh, what have Buffy and Twilight led to? Joining so many others, there’s a popular series of six books about an ancient war going on around us between good and bad vampires.  This is the first movie about it and stars two little-known TV actors, Zoey Deutch and Lucy Fry, a Russian hunk, Danila Kozlovsky and  Gabriel Byrne. It’s directed by Mark Waters, who’s filmography includes Mean Girls but also Ghosts of Girlfriends Past.  Media weren’t invited to the preview. As usual, that probably means something. (International Village and suburban theatres)