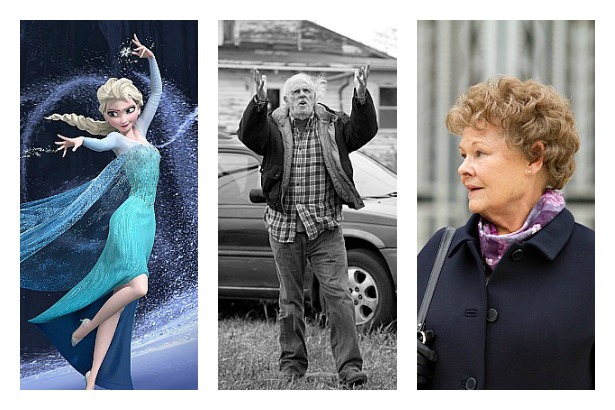 Disney, Dern and Dench lead the pack this week in three wonderful films

The American Thanksgiving films are here. That why suddenly there are so many highly-rated ones in theatres.  Here, top-notch and lesser, is this week’s list.

FROZEN: Disney’s latest animation harks back to special films like Beauty and the Beast and The Little Mermaid but, as with Tangled, goes modern too. Kids should love it as long as they know it’s far from the fairy tale The Snow Queen that it is ostensibly based on. The story is now about two sisters, princesses both; one (voiced by Kristen Bell) always eager to play and sad that the other (Idina Menzel) has isolated herself. She’s done that because everything she touches turns to ice. However on the day she’s crowned queen, a fit of remorse sends her running off to the mountains and bringing on eternal winter. Her sister goes looking for her along with a humble ice cutter, a reindeer and, in a wide divergence from the original, a comic snowman named Olaf. 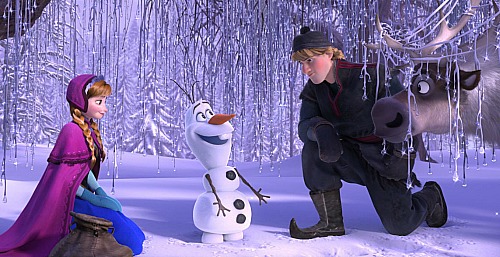 In another change, a single line in the original about wolves becomes a frightening, snarling chase sequence in the forest and snow. It’s done in very effective 3-D, as are ice patterns, snowfalls, looming staircases and more throughout the rest of the film. Most notably female empowerment is elevated from a brief mention to a major theme. We have strong sisters, one rescuing the other and dumping a weakling prince. It’s all shaped by a woman co-director, Jennifer Lee, a first for Disney animation. The songs, by the way, are good but only one, “For the First Time in Forever”, is really memorable. Still, a film that entertains, with terrific, if a little too-hyper, animation, and storytelling. (International Village, Dolphin and suburban theatres) 4 out of 5

NEBRASKA:  Bruce Dern has been getting heaps of praise for his performance here. And it’s all deserved. He plays a cranky, doddering old man and, with no showiness at all, succeeds at portraying him as just a human being. He won best actor at Cannes and stands to get honored again. Even more noteworthy about this latest film by Alexander Payne: it is stocked with many other outstanding performances. 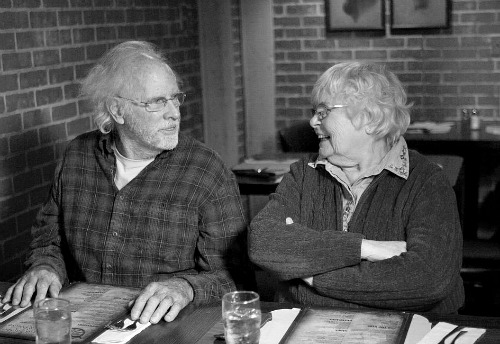 I especially liked June Squibb as his nattering wife. She had a brief role in a previous Payne film, About Schmidt, which has some other similarities to this new one.  In both an old man gets on the road, stops in with relatives, and by extension visits his own past and one facet of America. Dern’s Woody Grant thinks he’s won a million dollars and is determined to travel several hundred miles to collect. His son (Will Forte) reluctantly drives him and then watches bemused as relatives and old friends welcome him, tell old tales in a taciturn drawl, and then try to hit him up for part of his supposed winnings. Stacy Keach plays an especially insistent former business partner.  The film is often funny but also an elegiac vision of the rural mid-west, appropriately presented in crisp black and white. There’s an aura of truth in the script by Bob Nelson of Suquamish, Washington. He who used to spend summers in a small Nebraska town and has written what he knows. (5th Avenue Cinemas) 4 out of 5

PHILOMENA: This one could have spurred the tear ducts more than it does. The material is there and the story is true but it would invite a “too melodramatic” label. Restraint was a wise choice for director Stephen Frears and the lead actors, Judi Dench and Steve Coogan, who also co-wrote the script. The events are emotional enough. 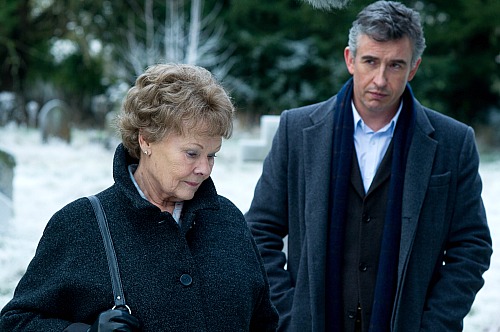 An unwed mother sees her son adopted away from her and years later tries to find out where he went and what kind of man he turned out to be. A serious journalist, ex-BBC and just laid off from a spin doctor job with the British government, agrees to help her because he needs money and is willing to stoop to writing a “human interest” story. Dench and Coogan make an amiably-contrasting and often very funny  pair. He’s cynically ironic; she’s down-to-earth and uncomplicated.  “Do you believe in God?” she asks. He waffles. She says a succinct “Yes.”

The nuns at the Irish orphanage don’t help them but a tip from a pub keeper sends them to Washington, D.C. where, rather too easily to feel true, they find the answers they’re after. He gets new reasons to rail against the church. She still refuses to hate. That’s the message of this movie, even after it uncovers a long history of less-than-godly behavior. Dench’s remarkable performance captures that decency and innocence perfectly while visually she’s so plain and frumpy at times you hardly recognize her. This is a very good film, not a downer at all and the best from Stephen Frears since The Queen. (International Village, The Park and a few suburban theatres).  4 ½ out of 5