New Ghostbusters for our time, a harrowing tale from World War II and an inspirational Dark Horse

It comes from the journal of a young doctor who served with the French Red Cross in Poland right at the end of World War II. She is prevailed upon to come to a Benedictine convent where he finds a nun in labor and six others also pregnant. She has to perform a quick C-section and on a number of subsequent visits hears the horrible background. Russian soldiers had raped all the nuns, including the older abbess who is trying to keep it all secret to avoid shame. While various depths of crisis of faith play out inside the convent, the doctor has her own issues. She’s breaking the rules just going there and, as an atheist (or Communist as she puts it), has to avoid judging women whose religious commitment won’t even let them be properly examined for fear of damnation. The characters are well-drawn. The doctor (played by Lou de Laâge) is calm; a confidante among the nuns (Agata Buzek) is forthcoming, although not enough about how she got there after an earlier life in which she liked men and men liked her, and the abbess  (Agata Kulesza) is severe and misguided. Somehow, maybe a bit to easily, the film finds an optimistic ending. (5th Avenue) 4 out of 5

DARK HORSE:  It’s taken a long time for this one to return after last fall’s film festival. But rejoice anyway. This is an immensely entertaining documentary about underdogs making a mark. It’s funny and inspiring in equal measure. 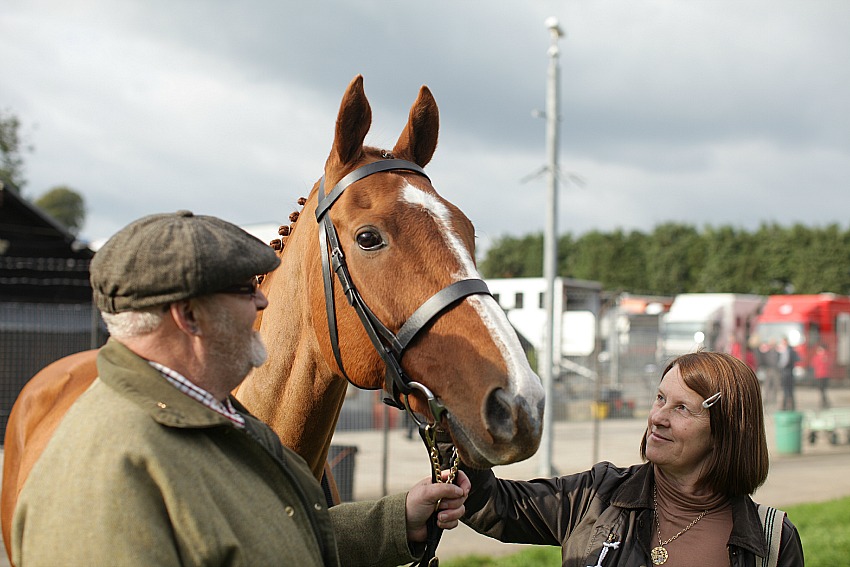 The humor is in the candid memories voiced by a group of people in a down on its luck Welsh town about the improbable venture they joined in. It was Jan Stokes down at the pub who got the idea. She knew a bit about dog breeding and said why not a race horse.  Thirty people chipping in 10 pounds a week can finance one. She, friends, investors and her husband Brian carry the story forward. There was early skepticism, then the buying and training of an admittedly “working class horse” and then the quest to “take on the best.”  They called him Dream Alliance, which is pretty appropriate. “Nags to riches,” a newspaper headline said when he did well in some early races, had a few without spark but went on to run in both the Welsh National and the Grand National. The film, by Louise Osmond, gets across the challenge he represented to the horsey upper class, the boost he gave to a depressed town and the value of working together even for an unlikely goal. (VanCity Theatre) 4 ½ out of 5

TICKLED: I kept thinking “Is this a mockumentary and not real?” But I couldn’t find any sign at all that it might be a put on. And certainly there are lawsuits flying about it, at least one already dismissed. It adds up then to a quirky story with a large slice of menace.

A pop culture TV reporter in New Zealand named David Farrier thought it was only quirky when he found videos on the internet showing “competitive endurance tickling.” When he contacted the company responsible to do a feature he got (a) an off-putting response and then (b) three men coming all the way from Los Angeles to tell him to drop the idea or face legal action. Any reporter would suspect there must be something there so he and co-director Dylan Reeve went to investigate. They saw the studio in L.A. where the videos were made, talked to some young men who told of bad experiences including intimidation and exploitation and followed the trail to New York to a dodgy person who denied being behind it although his stepmother offers some worrying background. The film draws you in with the thrill of unraveling a mystery. It falls short though on the context. Farrier talks to a legitimate producer of such videos but tells us little about what they’re all about or how widespread the scene is. Or even if there is one. (VanCity Theatre) 3 ½ out of 5

ON THE FARM (aka Unclaimed): The VanCity Theatre has a special preview on Sunday evening of a TV movie about Willie Pickton’s crimes. Despite what the title seems to suggest, it’s not much about him per se. He’s only in it as a bit-part (played by Ben Cotton). The focus is on the Downtown Eastside, his victims and the climate of fear he created among sex-workers, drug addicts and down and out women. Also on the inability of police at the time to take seriously the rumors of missing women. 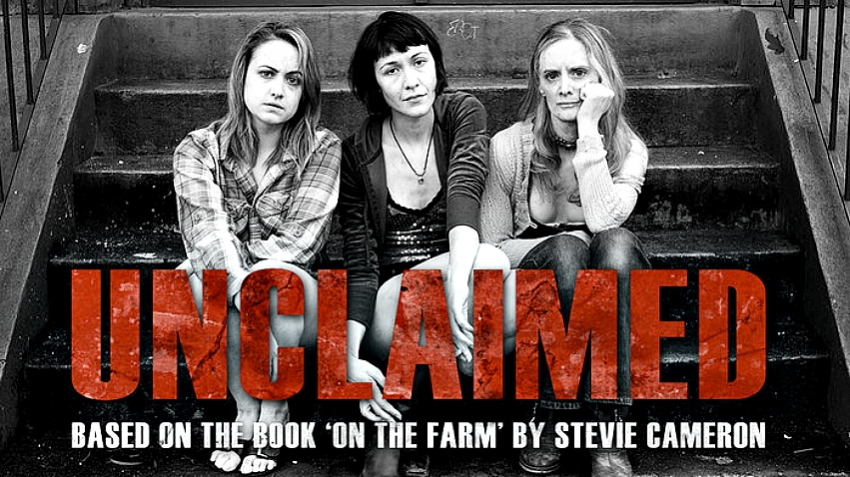 It’s based on the book and investigative journalism by Stevie Cameron but is very much a hometown production. Dennis Foon wrote the script and the husband and wife team of Rupert Harvey and Rachel Talalay, respectively, produced and directed it. The content is fictionalized; the issues are real. Maija Tailfeathers, centre in the picture above, portrays an addict and sex worker who has friends disappearing, Sara Canning a cop trying to get her superiors to recognize there’s a serial killer about and Sarah Strange a fiery administrator at a women’s centre. The film opts to honor the people who lived under the terror. Last month it won three Leo awards in the TV movie category, best film, best script and best casting. CBC is showing it on July 23. At the VanCity this Sunday, Harvey and Tailfeathers will take part in a panel discussion about the film.