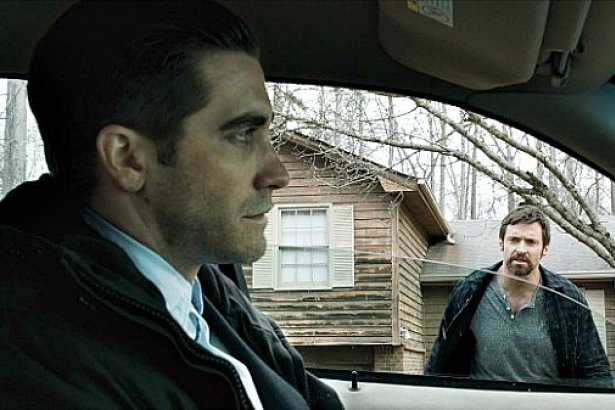 Many new titles this week but you’ll notice that I haven’t seen four of them. Some weren’t previewed here, I was away for one and there was a conflict for another.

PRISONERS: Quebec’s Denis Villeneuve is the perfect director for this one, his first Hollywood film. He’s taken on grim subjects before and made them work, winning nine Genies for Polytechnique and eight, plus an Academy Award nomination, for Incendies. But not even he can prevent the slog that this film becomes in the later stretches of its 2 ½ hour running time. Too bad, because before that he’s fashioned a gripping mystery, full of tension and ethical questions and drawn fine performances from the cast.  It’s the script with too many story complications and uncertain motivations that drags down the momentum. 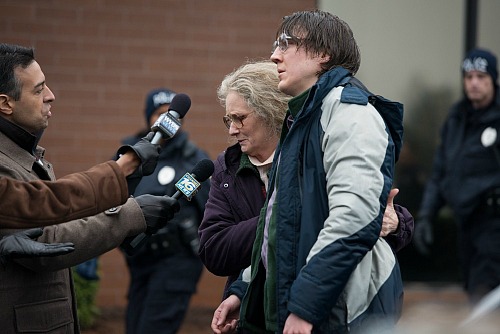 Two families come together for dinner; two young girls disappear and one of the fathers (volatile Hugh Jackman) gets angry and frantic. He’s sure a feeble-minded loner in an RV (Paul Dano) took them but the cop on the case (Jake Gyllenhaal) has no evidence to hold him. That doesn’t stop Hugh. He locks him up in an empty house, beats him bloody and ultimately tortures him. Hugh’s wife (Maria Bello) is distraught with crying fits while the other couple (Viola Davis and Terrence Howard) try a middle ground of reason. Not easy to do as questions of revenge, sin, old crimes and their lingering effects come up front. There’s much to think about in these bleak small-town scenes, if you can keep on top of the twists and ancient revelations that clutter up the later ones. (5th Avenue, Scotiabank and many suburban theatres) 3 ½ out of 5

SALINGER: There’s been an inordinate veil of secrecy around this film and now the reason seems clear. It’s called hype. You whet their appetites and they’ll come. Tragically that sets up a great irony: J. D. Salinger tried to escape the publicity that came his way and turned oppressive, after The Catcher in the Rye turned into a massive hit. This documentary turns the modern celebrity publicity machine on him anyway. Shane Salerno, a screenwriter of Hollywood action pictures, worked on it for over nine years, six of them while Salinger was still alive. He may not be one of those pesky acolytes who bothered him with meaning-of-life questions ("I am not a teacher or a seer. I'm a fiction writer," he told one) but Salerno comes close. He interviewed over 100 people, writers like Gore Vidal to celebs like Judd Apatow, two former girlfriends to a couple of photographers who staked out his New Hampshire retreat and two biographers. He investigated every corner of his life. The result is a brisk overview that’s full of tidbits but doesn’t add much to what we already know. 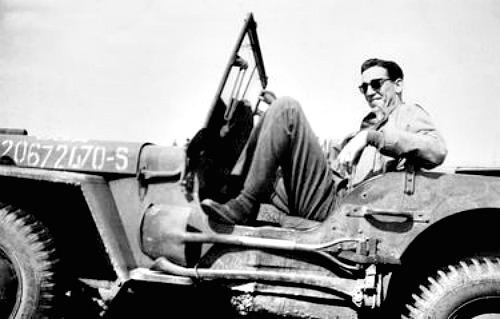 The biggest contention he makes is that Salinger’s war service shaped everything he wrote. From the D-Day landing to liberating a death camp to the de-Nazification program, he was exposed to visions of horror and suffered a nervous breakdown. But he was already writing Catcher in the Rye before those. There’s a photo of him working on it. The theory is possible but conclusive. Just as interesting is that the man who wrote such warm stories about the Glass family wasn’t much of a family man himself.

The film is worth seeing as a quick biography if the story is new to you. It’s spirited, with flashy Hollywood techniques to keep it lively, although a recurring re-enactment in which an actor types away in a large room gets tiring. There’s a short, never-before-seen film clip of Salinger after the liberation of Paris, a bunch of rare photographs (including the last ones ever taken) and some actual news. Five new books found in his house will be published. And I don’t know if this is new: he ordered that no movie will ever be made of The Catcher in the Rye. (5th Avenue) 3 out of 5

MY LUCKY STAR: This film isn’t especially good but it’s probably the most fun among the new arrivals. It’s a bright, colorful and fizzy (and more than a little silly) romantic adventure of the kind Hollywood used to give us with stars like Cary Grant and Audrey Hepburn. 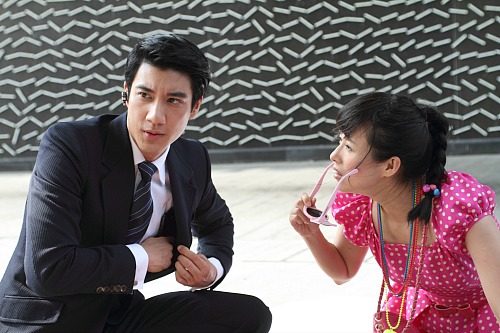 It’s Chinese, so the leads are Ziyi Zhang, best known for Crouching Tiger, Hidden Dragon, and Wang Leehom, a popular singer and actor soon to be seen in American films. He’s an interpol agent sent to Singapore to find a stolen diamond. She wins a trip there from a dull job in Beijing and wouldn’t you know it, not only do they meet and he’s exactly like the man of her dreams, as in the graphic novels she’s always drawing, but she’s inadvertantly handed the diamond and in a flash they’re both are on the run from some heavy crooks. And from their tough boss, a woman with a spider tattoo and the name Black Widow. The plot turns absurd about there (Parachute off an office tower? Play gondolier in a Macau version of Venice? Save the world from arms dealers?) but the energy builds nicely and the two stars develop a pleasant, if not very hot, chemistry. (International Village and Riverport theatres) 2 ½ out of 5

THE ART OF THE STEAL: This is not the documentary about art theft that came out with exactly the same title four years ago. This is a caper film about art theft. It’s Canadian, filmed largely in Niagara Falls, and starring a couple of big name American actors (Kurt Russell, Matt Dillon), a movie-stealing Brit (Terence Stamp) and lot of familiar names like Jay Baruchel, Kathryn Winnick and Kenneth Welsh. My problem is, I never believed any of it. 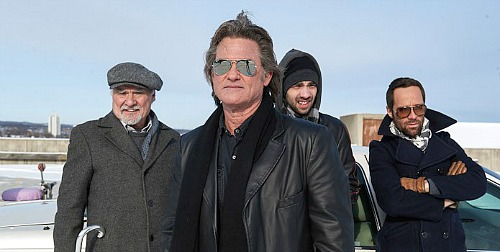 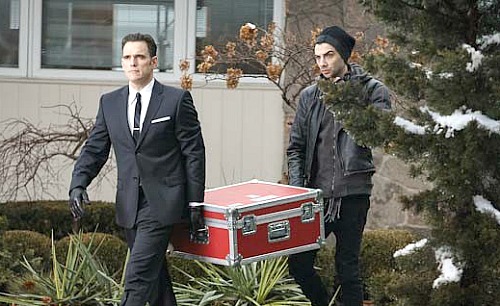 Kurt and Matt are estranged half-brothers who come together for one of those last jobs movie criminals do so often. Since Matt had caused Kurt to spend 7 years in a Polish prison, their reunion isn’t easy. Also Interpol is on his tail for a stolen Seurat, you know “the seminal French impressionist; the father of pointilism,” as one character so helpfully explains. This time they’re after a book, The Gospel of James, said to be the second bookGutenbergprinted.Conveniently, it’s nearby, in a U.S. customs office, seized and awaiting verification by an expert. Our boys re-assemble their gang, including an ever kvetching Baruchel, and go after it. Stamp is an ex-thief advising the police and getting all the best lines in the script. The plan is clever; the film is less fun than it should be but watchable. (International Village and a few suburban theatres) 2 ½ out of 5

THE WIZARD OF OZ: An IMAX 3D Experience: With every new technology and on every possible anniversary, this classic film has been cleaned up, renewed and sold to us once more. This time it comes converted into 3-D and projected onto the giant IMAX screen to “create a unique environment that will make audiences feel as if they are in the movie.” I didn’t know we needed that. The film has been absolutely enthralling all along. As for 3-D, I guess the tornado and the flying monkeys can benefit. The film wasn’t previewed here so I can’t say if it’s worth the money you’ll spend or the distance you’ll have to travel. The only IMAX theatres around here are at Silver City Riverport and Colossus, Langley.

AUSTENLAND: The always likeable Keri Russell stars as a woman obsessed with Jane Austen’s writing and the image therein of Mr. Darcy (the Colin Firth version). She needs more though and travels to England where Shannon Hale’s novel imagines there a theme park where guests dress and live like Austen characters. Keri buys the economy package which only puts her up in the servant quarters. Sounds like a cute idea but I haven’t seen the film and direct you to two wildly opposing opinions. On the one side there’s Anthony Lane who absolutely trashed it in the New Yorker (“claptrap” and “an insult”). On the other there’s Claudia Puig who kind of liked it in USA Today (“spirited and gently witty”). (International Village)

BATTLE OF THE YEAR: Five years ago director Benson Lee brought us Planet B-Boy, a nifty little documentary about an international breakdancing competition. Here he’s made a fictional version of the same idea. The main difference seems to be that the contest is staged not in Germany this time, but in France. Oh, and the fact that bad-boy Chris Brown is in the cast, playing a character named Rooster.  Josh Holloway, famous from TV’s Lost and People Magazine’s 50 most beautiful people ranking, stars as the American team organizer. The U.S. hasn’t won in 15 years. I haven’t seen it and can only wish them the best. (Scotiabank and suburban theatres)

A SINGLE SHOT: A hunter accidentally kills a young woman, finds a pile of money she had and rather than fix up his life with it finds it threatens it. The money belongs to a bunch of hoods who want it back. That’s the film noir plot of this American production filmed here in Vancouver. We play West Virginia. The great Sam Rockwell is the hunter (hunted?) and William H. Macy, Kelly Reilly, Jason Isaacs, Jeffrey Wright and Academy Award-winner Melissa Leo are in the cast. Just one theatre, The Dunbar, booked this one.