The past is back in Jurassic Park 3D, Lore, Ginger and Rosa, Evil Dead and Miami Connection

Back in 1981, when Sam Raimi made the same story as The Evil Dead, it was novel. It became a cult film, spawned two sequels and influenced copycats.  Today, with Raimi having moved on to the Spider Man films and the current Oz flick but still involved as producer, the story is stale. Five young people arrive at a cabin in the woods, inadvertently stir up a demon and try to stay alive for the rest of the movie. Nobody should go down into the basement through that trap door. They should run as soon as they see all the dead cats hanging down there and they should never read aloud from a book of the dead they find. Neither clever like the original film or funny like the first sequel, this one relies on brute force, higher production values (the gore looks painfully real) and sly references back to please the fans, who, incidentally, get an extra tidbit just for them after the end credits. (Scotiabank and suburban theatres) 2 out of 5

LORE:  The VanCity theatre which is a showing a couple of Holocaust-themed films Sunday (check the website http://www.viff.org/theatre for RETURN TO REICHENBACH and HITLER’S CHILDREN) has also got this gripping drama along similar lines playing for four days. It’s a harrowing road trip through a Germany smashed to rubble by World War 2 and a serious inquiry into guilt. Who, besides the first-hand perpetrators, should share it?  How did the war affect ordinary people, especially the children, and how much of a burden should they share? 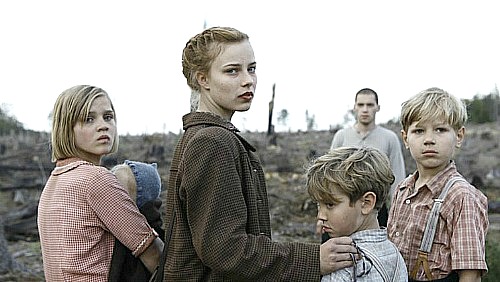 The film lets these questions drift around subtly as Lore, short for Hannelore, the teenage daughter of an SS officer, comes to realize her country and everything she’s been taught is in pieces. “The Fuehrer is dead?” she asks. Her parents have to disappear and she has to lead four siblings, one a baby, on an almost 800 kilometer trek from the Black Forest to the north, where her grandmother lives. She has to keep their spirits up while she has to barter or scrounge for food, hide out in abandoned farm buildings and elude the American army patrols. She has to trust a young Jewish man who joins them although she instinctively hates him and calls him a “parasite”. Saskia Rosendahl  is excellent as Lore who has to deal with all the new issues coming at her, sees shocking evidence of rape and undergoes de-Nazification. The ending is a bit improbable but then the story does come from a British novel. The film is in German, although directed by an Aussie, Cate Shortland. (VanCity Theatre) 4 out of 5

NEIGHBOURING SOUNDS: There’s not really a story arc in this Brazilian film, not one we’re familiar with, at least. There are a series of incidents and a skein of relationships that amount to a portrait of a neighborhood. And an outline of creeping modernism. It’s engrossing to watch and to compare to our own city. 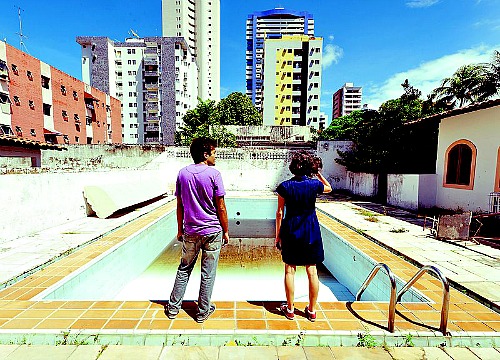 The location is Recife, far north of Rio, a city of new high-rise towers spread across the wide screen. It’s only recently been carved out of a sugar plantation and the owner of the nearby and now dilapidated sugar mill also owns many of the buildings. The new is portrayed as something less than the way of life that existed before. A woman is obsessed with a barking dog that keeps her awake. A local thief vandalizes a visiting woman’s car. The house she used to live in will soon be another 20-storey tower.  Two children are being taught English and Mandarin. Residents make callous, self-absorbed comments at a meeting as they ponder firing a night watchman who has gotten old. A fast-talking huckster sells a private security service. The cumulative effect is a study of change and the stresses it brings. The film is a bit slow in the middle but well-acted and superbly directed by Kieber Mendonça Filho a former film critic. In Portuguese with subtitles. (VanCity) 3 ½ out of 5

MIAMI CONNECTION: It happens quite often. Somebody rounds up some money and a bunch of friends and makes a movie, only to have it disappear into obscurity. This film did.  Y.K. Kim made it in 1987 (wrote, directed, produced and starred in it) in Orlando, Florida where he is a Tae Kwon Do master and motivational speaker. But 30 years later, a programmer with an obscure Texas company found a print for sale on E-bay, bought it for $50 and realized he had something unique. Of course. 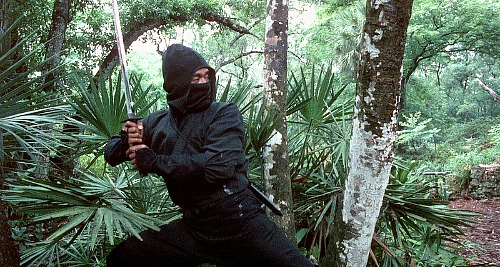 There are motorcycle ninjas running the drug trade. Tae Kwon Do enthusiasts fighting them, as well as a regular biker gang, and playing nightclub gigs as a band called Dragon Sound. We get two rather poppy songs by them. The woman singer  has a brother who’s in one of the gangs and he doesn’t want her associating with his enemies like that. The plot thickens as you’d expect and it’s a hoot; ludicrous and entertaining. With lots of martial arts and then some near-graphic bloody stuff to bring the film to a climax. Weak acting, clumsy scripting and shaky direction won’t distract you from the colorful fun.  (Pacific Cinematheque) 3 out of 5

NOTE: All images are supplied by the film producers and are the exclusive property of their copyright owners.