Reviews of Maggie’s Plan, a modern screwball comedy, and two sequels, The Conjuring 2 and Now You See Me 2

There are bumping sounds in the night and shadowy figures skulking in the shadows. In come Americans Ed and Lorraine Warren (Patrick Wilson, Vera Farmiga) to investigate. They made their name with the Amityville horror, which has spawned movies since 1979, and last film studied a similar case in Rhode Island. Their role in this Enfield Poltergeist incident seems highly expanded from what actually happened. Lorraine fears for her faith; Ed wields a mean crucifix and even some plumbing tools to take on a demon. The atmosphere is thick with anxiety; Wan puts you into it with a very mobile camera and the actors are convincing. That’s Franka Potente (Run Lola Run) as a skeptic. (Scotiabank, Marine Gateway and suburban theatres) 3 out of 5

NOW YOU SEE ME 2:  There are several story problems with this sequel. First, and biggest, is that the narrative is there simply to hang all the razzle dazzle on. Other than that it doesn’t make much sense. There’s a late reveal that seems to contradict something at the start and some incidental social commentary about surveillance that seems tacked on. And there’s no need to take the story to Macau, except as a concession to the huge movie market that China has become. That’s a lot of ulterior motivation you’ll need to ignore to feel the fun. 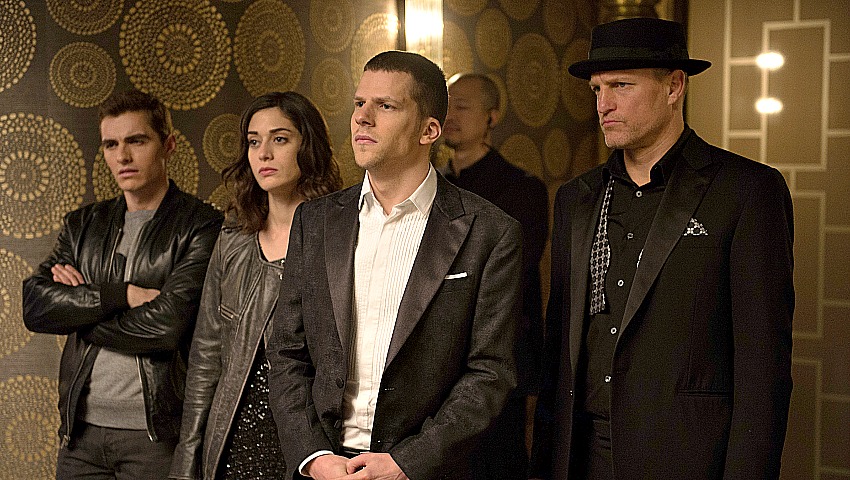 The magicians who call themselves “the four horsemen” are back: Jesse Eisenberg, Woody Harrelson, Dave Franco and new member Lizzy Caplan. They’re modern Robin Hoods, stealing from the rich and powerful while Mark Ruffalo, as an FBI agent, encourages them. After a year of boring inactivity, they get a new mission. It comes under duress from a high tech whiz played by former Harry Potter himself, Daniel Radcliffe. He wants them to steal a super-powerful anti-encryption device that would give him access to any computer on earth. The heist is tense sure, followed by a lively scene as the four use slight of hand to pass it back and forth and keep it away from security guards. The film ends with some grandiose and frantic magic in London. Director Jon M. Chu keeps things light and speedy but can’t overcome the artificial plot.     (International Village, Marine Gateway, The Park and suburban theatres) 2 ½ out of 5

THE DEVIL’S HORN: That would be the saxophone which according to this fascinating documentary by Larry Weinstein has struck some people as a threat to the social order. The Nazis, Stalin and a Pope banned it. Apparently its seductive tones stir temptation and loose behavior. Drugs have often been connected. Just think of great players like Charlie Parker said to have had “a needle in his arm and demons in his soul.” There were many others, the film says, who were victims of “saxophone’s curse.” 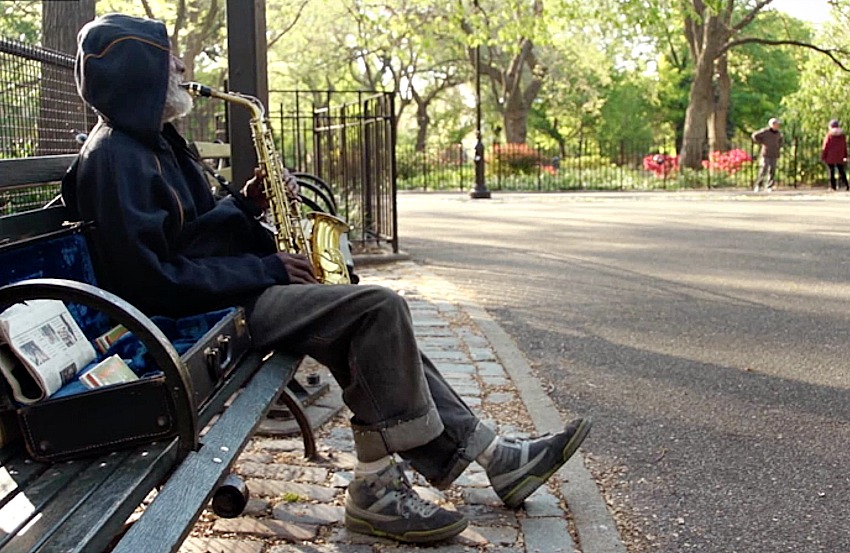 Giuseppi Logan was a top free-jazz player in the 1960s. He was shot by a drug dealer and in the film seems a sad homeless man. Adolphe Sax, who invented the instrument 175 years ago, went bankrupt fighting lawsuits. But there’s more than just dark history. We meet the most famous sax player in Bulgaria, a Kansas City pastor who welcomes the instrument into his church as “God’s voice” and a modern player who says its possibilities have “not been fully explored yet.” Rock and roll is underrepresented leaving it to Bob Lind of the Sonics to talk it up. Personal stories, archival clips and lots of music make for a lively film. (VanCity Theatre, Tues).  3 ½ out of 5

The day before and also the day after there’s I Am the Blues, in which you hear lesser known but veteran blues singers still performing in the old style. They were found in Mississippi and Louisiana by Quebec filmmaker Daniel Cross.

Also on that day after, there’s a repeat of Born to Be Blue, the fine film about Chet Baker in which Ethan Hawke plays the charismatic but troubled trumpet player from the west coast.

You can get details at http://www.viff.org/theatre

WARCRAFT: The studios are quick to tell you when a film gets a high rating on aggregate sites like Rotten Tomatoes. They don’t mention low scores. OK, I can help, although I haven’t seen it myself. This film has a miserable 22% on Rotten Tomatoes and a not much better 27% on Metacritic. It’s yet another movie based on a computer game, not generally a good source, but has two things in its favor. It’s already a hit in China and the director, Duncan Jones (David Bowie’s son) has made a couple of very good movies. He’s also a fan of the game in which orcs and humans fight over the world of Azeroth. He should know then that the fun is in playing it, not in watching. (Marine Gateway, Scotiabank and suburban theatres)