Life with a “gifted” child like that must be trying much of the time and the film examines it too briefly. Chris Evans plays the uncle who’s raising her and they have a warm relationship with occasional testy arguments. She should be in a special school but he won’t send her; he wants a normal life for her. She doesn’t want to go to any school at all. “People my age are boring,” she says. The film veers away though and becomes a custody battle in court. The girl’s grandmother, played with ice and condescension by Lindsay Duncan, wants a foster home and lots of high-level mathematics for her. The reasons are convoluted and melodramatic but they bring on some gut-wrenching scenes. They’re way off the prime topic but young McKenna makes them work. (International Village and a few suburban theatres)  3 out of 5

CANADIAN FILM DAY: Our own films are getting a huge promotion this coming week. Wed April 19 is called Canadian Film Day and there will be 1,700 screenings across the country most of them free.  They’ll be in schools, theatres, legions, community halls. Locally the National Film Board will be at three locations, the Cinematheque is showing works by Anne Marie Fleming, Sarah Polley and Guy Maddin and the VanCity has two Adam Egoyan films, a live appearance by the director himself and a BC film he personally chose (and its director also appearing).

There’s so much but this website can help. You can select by province and by community to see what’s playing. https://canadianfilmday.ca/see-a-film/events-listing/

The VanCity theatre is doing more. It’s filling out the rest of the week with new Canadian films. They’re not free but of the three I’ve seen, two are entertaining and one is an important warning.

BLACK CODE: This latest film about our surveillance society is probably the most alarming yet but it also offers an optimistic vision of an unexpected by-product. I’d say this is a must-see if you’re at all interested in the threats to privacy in this digital age. Edward Snowden is a hero to the people talking here. They’re at the Citizen Lab at the University of Toronto which made international news when it exposed a world-wide computer spy network run by China, and incidentally that other countries, including Canada use its techniques. Prof. Ron Deibert, director of the Lab, is our guide with dire warnings that surveillance amounts to “acts of war taken against citizens.” He’s got lots of examples from Tibet to Ethiopia to the Middle East and he explains exactly how they’re done. 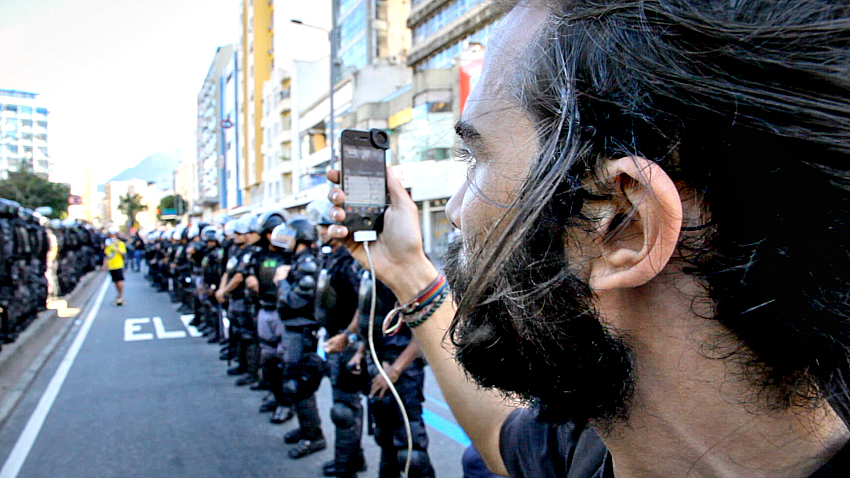 In the film’s second half there’s a ray of hope. Digital devices have spawned a citizen media. Pictures get to us from the most controlled places. China wouldn’t never allow out video of Tibetans self-immolating but it does get out. A remarkable example from Rio de Janeiro shows guerilla journalists broadcasting live from a demonstration via their cell phones. But what happens then is stunning. A demonstrator is arrested for throwing molotov cocktails. An appeal goes out for cell phone images and they show he didn’t do it. What’s more other images show the guy who did do it and that’s a shocker. As one citizen reporter says: “If you don’t like the media, become the media.” (VanCity Theatre, Fri.  to  Mon. Ron Dreibert and the film’s director  Nicholas de Pencier will talk via Skype after tonight’s screening)           4 ½ out of 5

GRAND UNIFIED THEORY: David Ray learned so much science that he wasn’t able to use when he wrote for the SyFy channel, he decided to make this film. It’s a strange hybrid but continually interesting and entertaining. Plot lines interconnect and wrap around each other to cause effects that swing back in surprising ways to cause other effects. And parallel to all that, the film switches repeatedly to a lecture about the universe by an astrophysicist played by Scott Bellis. (His lecture was co-written by a UBC prof for authenticity).

What happens to him, his family their friends though is a lark. Run-ins with the police, stalled sports ambitions, voyeurism, professional  advance sought and argued about. That and more make for a breezy kaleidoscope and a counterpart to the chaotic universe which the lecture says it’s just too big to understand. Life down here is just as hard to make sense of but you can enjoy this interpritation.  3 out of 5