Reviews of an unexpected charmer, a really red wedding and a local boy who shines in a mediocre movie

THE DEATH AND LIFE OF JOHN F. DONOVAN: Jacob Tremblay, Vancouver’s own (and currently also in the hit movie Good Boys) is the best thing in this not-so-new film by Quebec’s whiz kid director, Xavier Dolan. (Actually he’s 29 but he’s been at his trade since he was only 20). Tremblay is 12 and puts in a beautiful performance here as an 11-year-old bullied kid who consoles himself by writing letters to his favorite TV actor. Amazingly, the guy, played by Kit Harington, yes the erstwhile Jon Snow, writes back and the two correspond for some time. Until the actor is found dead one day. The boy is distraught and years later an adult version of him writes a book and tells the story to a reporter. Fame and adoration are well-portrayed. 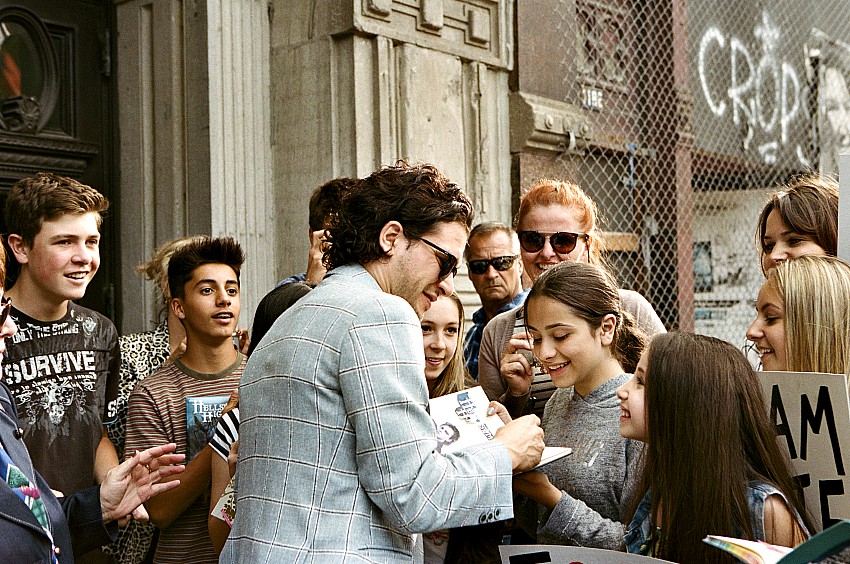 So far so good except that as it comes out in flashbacks and an interview over coffee it’s not clear what really happened. The actor was a closeted gay; the boy was harassed at school. A scandal broke out when their correspondence became known but why? And why did it lead to his death? The film is too muddled to tell us. We don’t get enough about him and that leaves a hole in the centre of the story.

It’s Dolan’s first English-language film and he gives us a lot of his usual: the problems of gays, arguments with mom, feelings of living a lie. Tremblay’s side, the adoring fan, is more convincing and he does a remarkable job with a talking-while-crying scene. Natalie Portman, Susan Sarandon, Kathie Bates, Thandie Newman and Michael Gambon are also good but for Dolan, who fussed and re-edited this over two years or so, it’s only an average film. (International Village) 2 out of 5

TONI MORRISON: THE PIECES I AM: This film about the beloved writer wasn’t picked up by any theatre around here when it was offered back in July but after she died less than three weeks ago it’s been getting a few one day bookings. The latest is this afternoon at four at the VanCity Theatre. Short notice, but the film is worth catching because it elucidates the thoughts, the life history and, most importantly, the craft of a committed artist. 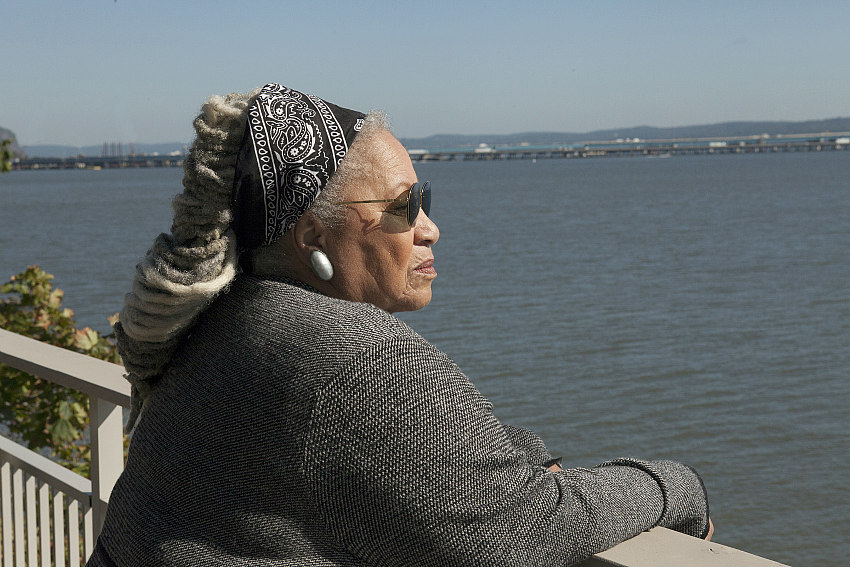 She answered an ad for an editoral assistant at a small publisher that was later bought out by Random House, became an editor (Angela Davis and Muhammad Ali were among her finds) and started writing herself. She won a Nobel Prize but not a Pulitzer (until other writers mounted a campaign for her). Oprah Winfrey was (and is again in the film) an enthusiastic supporter. So are Fran Leibowitz, Angela Davis and various editors and critics who share stories. There are old clips (news and interviews) but the bulk of the film is Morrison talking straight at us, amiably, with humor and wisdom. She laughed at segregation and decided not dwell on blacks as victims but depict them as real human beings who have dreams and imagination. It’s a very good and stimulating introduction to her work. (VanCity) 4 out of 5

AQUARELA: Much like in the films of Jennifer Baichwal and Edward Burtynsky here’s an environmental story told in grand, often imposing images. Water is the subject here, in all its forms, its beauty and power. Also danger. The Russian director Viktor Kossakovsky shows it without narration, hardly any people at all in the sequences, and sharp, crisp images (captured with a higher than normal film speed) and natural sounds delivered in the latest hi-tech format. The effect is exhilarating when ice shatters from a glacier in Greenland, or water drops down a cliff in the world’s largest waterfall (Venezuela) or giant waves crash in from an ocean. 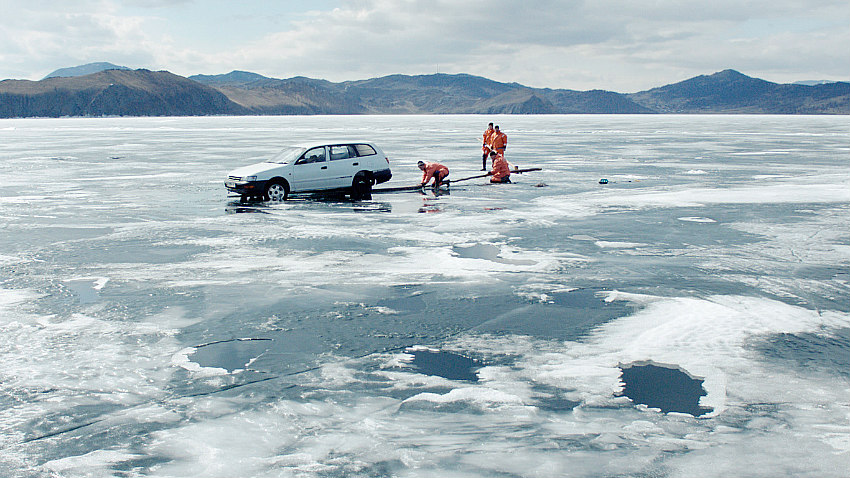 The film starts on a Russian lake where drivers haven’t noticed the ice has melted early. Their cars have to be located and pulled up out of the water. We see the effort in detail. It seems like a bit of a humorous start but many images later, as a wind storm throws water around a Miami street, a message becomes clear. This film is not just about the majesty of water, but also about the signs of climate change you can see in it. It’s a cautionary picture show. (VanCity Theatre) 3 ½ out of 5

ANGEL HAS FALLEN: He’s got a new president (Morgan Freeman) and a new woman (Piper Perabo)  playing his wife, but it’s the same Gerard Butler as the stalwart secret service agent Mike Banning who  we’ve seen twice before. Dogged, sturdy, reliable. Odd isn’t it, though? How could he, who saved his president twice, now be accused of trying to assassinate one? Impeccable logic doesn’t matter here. It’s action the customers want and this film delivers lots of it. It’s propulsive with chases (a semi-trailer truck tipping off a dark road is a highlight), and with explosions, drone attacks and flashes of political intrigue. 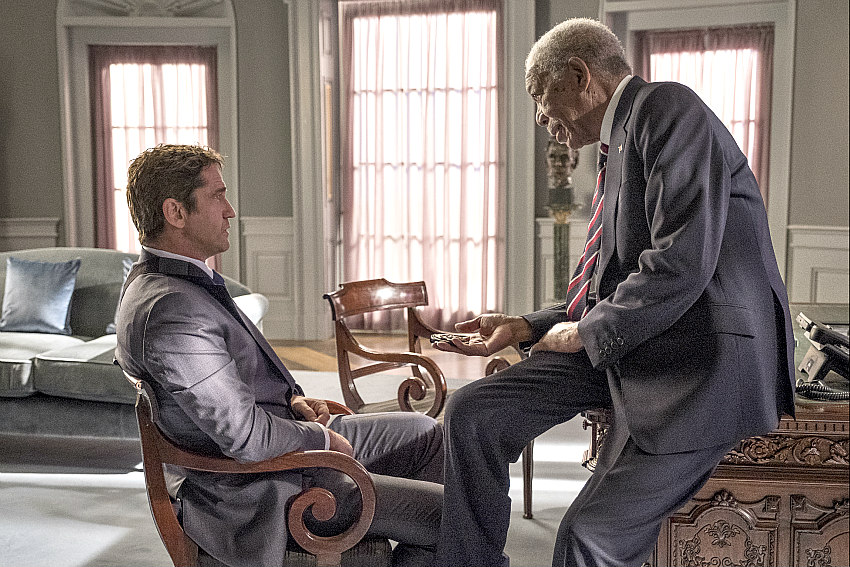 Banning is close to the prez and in line for a promotion but on the run to prove his innocence after the nearly-successful hit puts the president into a coma and the vice-president in charge. An old colleague (Danny Huston) turns against him and a persistent FBI woman (Jada Pinkett Smith) is on his tail. He has to seek out his reclusive father (Nick Nolte) for advice and gets a rant about the corrosive effects of war on even the strongest men. We hear about the dangers of hiring private army contractors to help “make this country great again.” Election tampering comes up in another of those contemporary references that are so in these days. Still, it’s just a thrill ride. (Scotiabank, Marine Gateway, and suburban theatres) 2 ½ out of 5