A scary Marriage Story, a classy Knives Out murder mystery and fighting DuPont in Dark Waters

The film is based on a magazine article about the case entitled “The Lawyer Who Became DuPont’s Worst Nightmare” but isn’t ever as dramatic as that. It shows the 16 years of hard work behind it, the research, the roomful of documents to go through, the discovery that the chemical was re-named C-8 to disguise it. Detective work by paper isn’t photogenic. But there was drama in the lawyer’s own office which usually defended chemical companies in court and where the boss (played by Tim Robbins) wasn’t  wanting to shift sides. Victor Garber as a Dupont executive was a roadblock too. (Anne Hathaway didn’t have much to do except be the lawyer’s supportive wife). But the persistence, the shocking facts and the details of digging them out make this an involving story and Todd Haynes, the director, keeps it moving along well enough. (International Village) 3 ½ out of 5

QUEEN & SLIM: This one was clearly inspired by the Black Lives Matter movement, so expect serious themes and content. But it's also a very cinematic road trip and an avoid-the-law flight for freedom. So it’s also an exciting, tense and entertaining movie with two attractive stars. One we know. Daniel Kaluuya impressed in Get Out and in Widows. Jodie Turner-Smith, lesser-known but with TV background, is the decisive but anxious Queen to his Slim. She’s a lawyer who’s had a bad day and is in for a worse night. After a dinner date, they’re pulled over by a white cop who bullies them. She suffers a gun shot; Slim grabs the gun and kills the cop and off they go.

The rest of the film is a series of incidents on their flight south and expertly modulated suspense interrupted by moments of calm. They hear on the radio that they’re cop killers. Out of gas, they get a ride with a pickup driver who turns out to be the local sheriff. They find sanctuary of a sort in a rhythm and blues roadhouse. Waiting for a car repair, they stroll a lakeside and ponder their lives.  Their idea, on her suggestion, is to get to Florida and from there to Cuba but every stop on the way reveals another side of America to them and the absolute necessity of the black community to stick together in solidarity. The film makes points like that without stating them directly but with incidents that illustrate them. The two even become folk heros when a video of the original incident caught on a dashcam goes viral. Not everything works—a sex scene intercut with a riot scene, for instance—but generally the message and the emotions hit. The director, Melina Matsoukas, is fresh to this (from Beyonce videos) and  the screenplay is by Emmy winner Lena Waithe. That’s another timely aspect here: two black women telling a black story. (International Village and two suburban theatres) 3 ½ out of 5

STAND! A key piece of Canadian history that we should all know more about gets a worthy, not super effective recounting in this film. This is the Winnipeg General Strike of 1919, a key event in the advance of workers’ rights, the union movement and political organizations. But telling it in a Romeo and Juliet-like narrative and as a musical doesn’t really fit. It’s no Pajama Game; the songs aren’t rousing and memorable and the story doesn’t bounce. It does tell what happened though and is based on a stage show co-written by Winnipeg native Danny Schur. So the facts are there but the spectacle is a bit like a staged pageant. 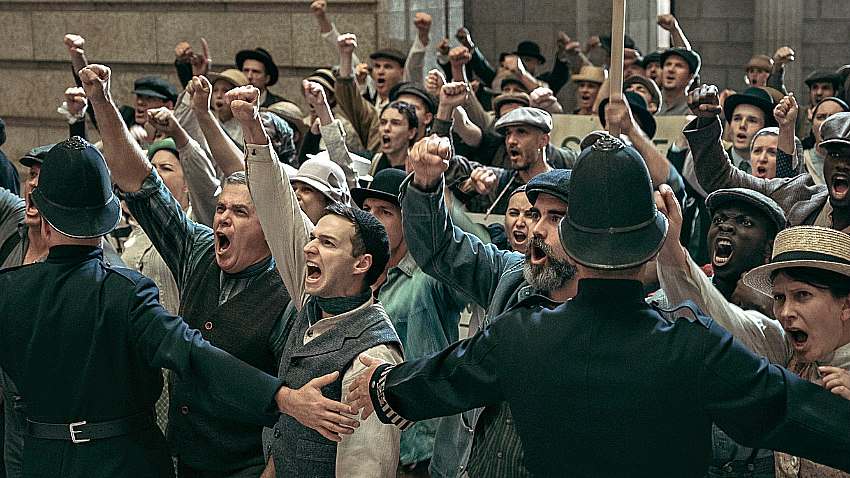 The war was over, soldiers were back home and there weren’t jobs for them. Some griped that immigrants were doing their work and for less pay. The film is loaded with rhetoric like “foreign bastards” and “bohunks and their Jew friends” and statements of purpose (“The more we do nothing, the more nothing changes.”) There’s a workers meeting, a vote for a general strike, a walkout by some 30,000 and, in response, a citizens committee formed by the bosses and elite of the city and leaning on Ottawa to help. On “Black Saturday” the police charge into a striker’s rally with guns and clubs. That and the politics leading up to it are well-presented but framing it all around a young romance between Marshall Williams as a Ukrainian steelworker and  Laura Slade Wiggins as a young Jewish suffragette, feels artificial. Robert Adetuyi, a Canadian with Hollywood experience, directed and a union, which helped finance the film, is working to get it shown in schools. (International Village and Riverport) 2 ½ out of 5

HONEY BOY: It’s not everybody who gets to work out his demons by portraying their source. For Shia LaBoeuf, movie actor, performance artist, tabloid newspaper subject for his misbehavior, that means portraying his own father in this film. He was a rodeo clown, a hovering parent when Shia was a child performer at Disney and an erratic sometimes abusive father when they lived in a cheap motel after mom had left. Recalling that relationship, in note form originally, was a rehab assignment after Shia was arrested for drunken behavior in 2017. Sound grim? Actually it’s quite fascinating and touching, as well as raw.

Shia not only gets to portray his father, but also gets to interact with two fellows playing himself, or at least the visions of himself that he wrote.  Noah Jupe is a bright young actor from England good at both abiding and arguing back at dad in that dingy motel. Lucas Hedges plays him at age twenty, a fidgety extrovert who comes closer to understanding and accepting him. Taken together, the effect is both painful and healing, pretty well what you’d expect out of a rehab exercise. The names have all been changed for whatever reason but the content seems to be authentic. Shia  never puts down his father and Alma Har’el directs from a documentary background.   (Scotiabank) 3 out of 5