Silly fun in White House Down; a thinker’s ordeal for Hannah Arendt and an intriguing premise in Blood Pressure 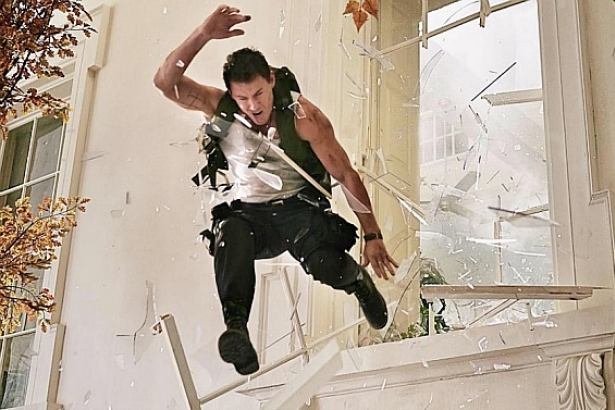 Channing Tatum was a model and a dancer. Now he’s an action star in White House Down.

The list of new movie offerings is short this week, but except for one title, pretty good.

The Heat:  not reviewed

WHITE HOUSE DOWN: Park your brains at the door. That advice has never been more appropriate than for this wreck-em, blast-em thrill fest that is so well-made that you can’t help but have fun despite its excesses and silly, illogical plot. I mean, how can all those bad guys sneak into what must be the most secure building in the world?  And not only that, bring in bombs and containers of muriatic acid? Why they do that is convoluted and changeable, involving at various times a right-wing plot to foil a Middle East peace plan, politicians and defense contractors, a multi-million dollar robbery, revenge for a son killed in Afghanistan and threat of a cancer-driven suicide.  Details. They’re not what we’re here for. 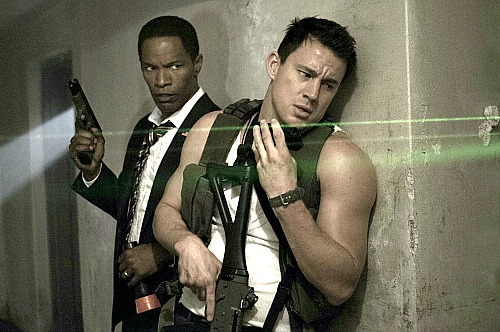 It’s action we want  and get as Channing Tatum plays a wanna-be secret service agent who comes to the White House for a job interview and a tour with his daughter and becomes the one man who can protect the president, played by Jamie Foxx. The bad guys, led by Jason Clarke (the torturer in Zero Dark Thirty and the murderous mechanic in The Great Gatsby) are running through the halls shooting anybody they see.  One is in a computer room pulling off “the greatest hack the world has ever seen.” Snipers are on the roof driving away helicopters. An accomplice (James Woods) is negotiating via video link with the vice president and the speaker of the house.  Channing and Jamie meanwhile are skulking through tunnels and climbing an elevator shaft in an obvious knock-off of the Die Hard movies.  The plot is the same as Olympus Has Fallen from three months ago except that the house is here nicknamed “the castle” and the intruders are white Americans. Also, there are bits of humor and political commentary in this one which helps boost the fun. That comes mostly in the giant action sequences and the hyper-active pace nicely directed by Roland Emmerich. He doesn’t get to blow up the White House as he did in Independence Day but he sure trashes most of the rooms, the front façade and the grounds and vents his bigger destructive fantasies on the Capitol dome.  Interestingly, this movie was largely filmed in Montreal.  (Scotiabank and many suburban theatres)  3 out of 5

HANNAH ARENDT:  Here’s a rarity. A film about ideas, philosophy, history, political analysis and, what’s more, a writer.  Not often dramatic material, except perhaps in a university tutorial, but German director Margarethe von Trotta and her star Barbara Sukowa make it live, as they did with their film about militant Rosa Luxemburg almost 30 years ago. The job was tougher this time. Writers type. Arendt also taught and lectured. But, in one short span of her long career, she sparked a firestorm of controversy. That’s what the film focuses on. 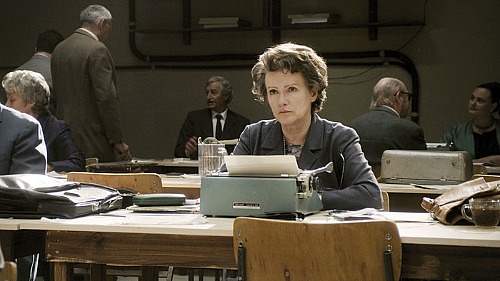 Arendt went to Israel in 1961 to cover the Adolf Eichmann trial for The New Yorker.  He was one of the architects of the Holocaust. She was a Jew who had fled Nazi Germany and was expected to describe him as a monster.  She saw a mere bureaucrat, a functionary who soulessly carried out his orders and she coined the timeless phrase “the banality of evil” to articulate the phenomenon. What’s more she severely blasted some Jewish leaders for co-operating with the Nazis. It had come up at the trial so she wrote about it, she said. Critics attacked her as a traitor to her people and a self-hating Jew. The film captures the uproar, the arguments and the emotional pressure on her. Also her strength leading to a fiery self-defence and explanation in a lecture hall. Sukowa’s performance is superb conveying her intellectual rigor as well what some of her students described as an almost grandmotherly softness.Her long-ago affair with Martin Heidegger, her philosophy professor and a Nazi-convert, is a sub-plot that feels like an unnecessary add-on.  (VanCity Theatre) 4 out of 5

BLOOD PRESSURE: This nifty little psychological mystery starts better than it ends. That’s because early on it draws you in strongly with an intriguing tale but then can’t quite muster up all the emotional impact it needs for a satisfying payoff. 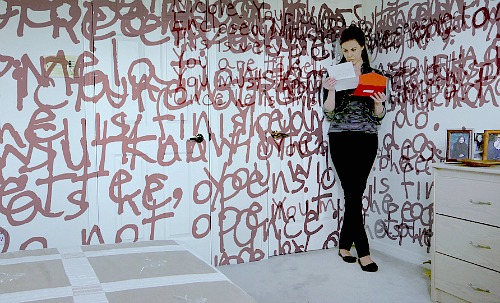 A suburban mom (Michelle Giroux) gets a tantalizing offer in a letter from an anonymous “friend” who knows she’s “frustrated by the limitations of your life.” (She’s married to a dull actuary, mother to a couple of demanding teens, working for a high-handed boss at a pharmacy, yearning to travel). She answers and through a number of further letters is encouraged to start self-defense training, target practice and spying on a man she doesn’t know. The real purpose isn’t revealed until quite a ways in so I won’t spoil it here but it does seem improbable, at least the way it’s written. A female empowerment angle that’s supposed to justify what she does only works so far before you’re asking “What is she doing” and why isn’t she asking questions. That also serves to undercut the ending which isn’t as shattering as it should be.

The film, set in Toronto, is tightly and deftly directed by Sean Garrity of Winnipeg, who is building quite a resume of works celebrated at festivals. His biggest contribution here might be to debut Michelle Giroux in the movies. She’s a stage actor who is entirely believable in this role. Garrity, by the way, will be at the Friday night show for a Q&A.) VanCity Theatre   3 out of 5

THE HEAT:  You can thank the huge hit Bridesmaids for this. The same director and it’s most memorable actor bring us this female buddy comedy about cops. Melissa McCarthy is now teamed up with Sandra Bullock, as incompatible partners—she’s abrasive;  Sandra is uptight—hunting down a drug lord in Boston. I haven’t seen it but people who have say it’s bad, funny at times but relentlessly foul-mouthed. I wasn’t impressed when the two stars promoted it and said it’ll help Boston heal after the marathon bombing.  (International Village and many suburban theatres)

NOTE: All images are movie stills provided by the producers. They are the exclusive property of their copyright owners.