Jesse Eisenberg, at his most nebbishy, plays a meek accountant. He’s ignored by the guys in the lunchroom and respected only by his dog. Not man enough, he fears and a beating by some bikers confirms it. He orders a gun but comes across a martial arts studio first and joins up. “I want to be what intimidates me,” he tells the leader (Alessandro Nivola) who teaches karate with the maxim “Everything should be as masculine as possible.”  Everybody follows it, even the lone woman (played by Imogen Poots, who also teaches a children’s class. The humor is in the little details about Jesse’s life outside the class and the philosophy and competition he’s exposed to inside. It’s America in a mirror. Most of it. (International Village) 3 ½ out of 5

PUSH: Sales are down, prices are easing but don’t think the housing crisis around here is ending. This film by Fredrik Gertten of Sweden and featuring a Canadian working for the United Nations explains why you can’t expect that. Housing a now a commodity, sold, bought and flipped for profit by big corporations, pension funds and rich investors. The affordability problem is everywhere.  Toronto, Valparaiso, Barcelona, New York, London  are just some of the cities the film visits. People can’t afford to live in them; rents are sky high, reconvictions happen and houses are bought and sold by financial entities like the Blackstone Group (which incidentally has been buying up commercial property around here including the Bentall Centre).

Companies like them grew in the wake of the 2008 financial crisis. The film explains the connection and also has also a short, nifty explanation of how money laundering works to add to the cost of housing. Nobel prize winner Joseph Stiglitz is one of the speakers and Leilani Farha gives the film’s central message. She’s Ottawa based, works as a special rapporteur for the United Nations and says repeatedly as the film follows her to meetings and conferences that housing must be treated as a human right. A review in the Globe said the only solution is to build more. That’s a tired argument if you follow the implications of this stimulating film. (VanCity) (Tonight’s screening will be followed by a panel discussion) 4 out of 5

ROJO: It means red in Spanish and various things in this film, including communist, anti-communist, guilty and embarrassed. Such are the multiple ideas floating round in this film from Argentina that seems to be portraying a country that has lost its sense of right and wrong. It’s set in 1975, which we and Argentinians know is not long before yet another military coup. Almost everyone is corrupt in some way in this story which works as both a straightforward film noir or an allegory. 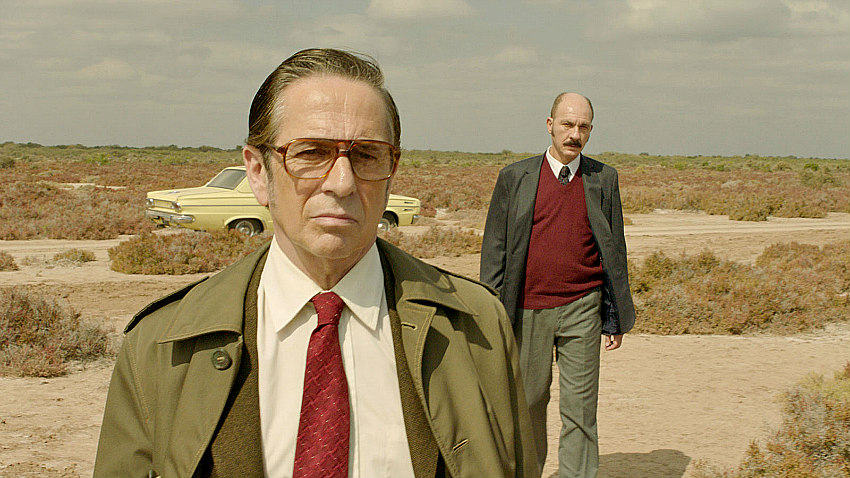 A house is being looted. A patron in a restaurant is harassed by a man who wants his table. Later, outside in the dark, the man shoots himself and the patron, who also happens to be a lawyer, disposes of his body.  Later he’s invited into a shady real estate deal while a TV-famous detective comes snooping around about the missing man.There are more inter connections, some of them improbable, but they make an intriguing puzzle, criminal investigation and mystery. Can the lawyer avoid incriminating himself? Can the detective get anything out of him with only a vague suspicion and no hard facts?  The story is subtle, the direction is crisp. Both are by  Benjamin Naishtat, a name to watch. His film leaves a lot unsaid but satisfies anyway. (VanCity) 3 ½ out of 5

PETERLOO: It’s the story, the information, the history, not any movie elegance or flash that will come through in the latest film from Mike Leigh. The content was all new to me and as a history buff I found it thrilling. The acting, not so much. It’s mannered and stagey. A prince talks like a buffoon about “great satisfaction” and “tranquility” (of which there is none in the climax.) It’s an outrageous  scene of carnage as soldiers attack some 60,000 people attending a democracy rally in Manchester, England just about exactly 200 years ago. It was in St Peter’s Field, not long after the battle of Waterloo; hence the title. 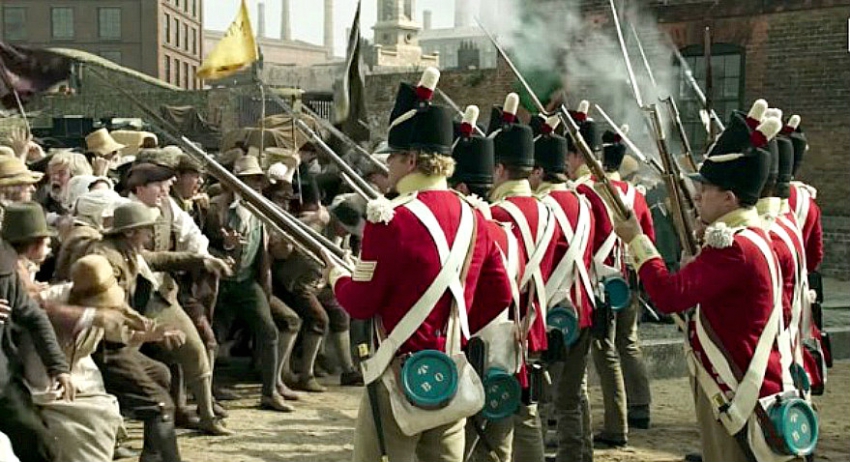 The film spends most of its time explaining the stakes, in detail. Soldiers were back from the war and forgotten. The economy was stagnant and there were wage cuts at the factories. Voices were raised about the owners (“fat leeches down in London”) and a delegation was sent to appeal to “the fat prince.” This was the regency period. The rally was organized to demand basic rights, including the right to vote. An eminent speaker (Roy Kinnear) was brought in from London and before him the film listens to a lot of debate on both sides. Some protest leaders were willing to turn to violence and business leaders were debating how best to break up the demonstration.  The talk is long and dry but the soldiers’ charge when it finally comes is directed with passion and will make you angry. You might be a bit tired by then, though. (VanCity Theatre, Sat, Mon and Thurs )  2 ½ out of 5