Tarantino’s Hollywood vision, one President who was stopped and women who demand to sail 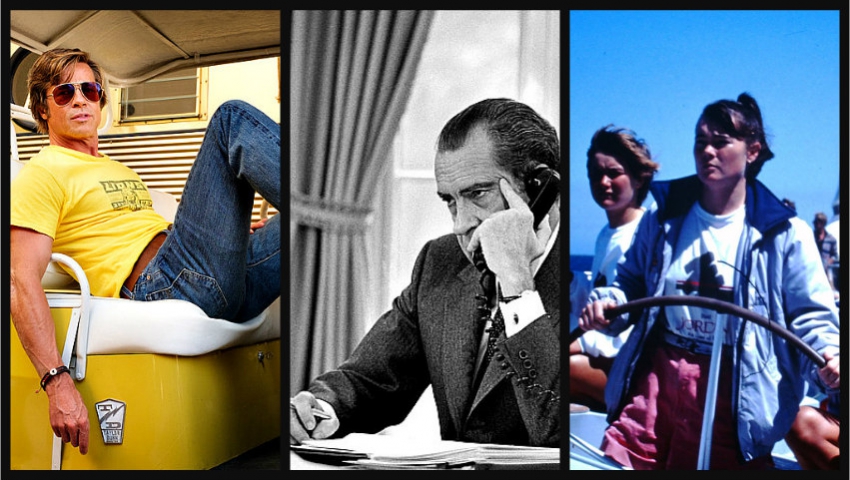 Well, it’s official. Avengers Endgame is now the biggest money-making film ever. It happened last Sunday and it was a big haul in China, South Korea and Brazil that finally pushed it up there. If you factor in inflation, Avatar would still be number one and in some calculations it would still be Gone With the Wind. No matter. This is how the numbers play these days and they say that of the 10 top-grossing movies of all time, one company, Disney, holds seven.  Amazing. And it started with a mouse.

This week, we’ve got:

Once Upon a Time … In Hollywood: 3 stars

Propaganda, The Art of Selling Lies: 3 ½

ONCE UPON A TIME … IN HOLLYWOOD: Again; a Quentin Tarantino film is an event. It’s immensely enjoyable for most of the way and then perplexing. Also a bit frustrating in that I can’t explain why. I’d have to tell you the ending to do that. So I’ll just have to be content with writing around it and offer this blanket overview: what you get there at the climax is completely different from the two hours that came before. It re-writes history and doesn’t offer a reason why. A fairytale, as per the title? I don’t buy that. 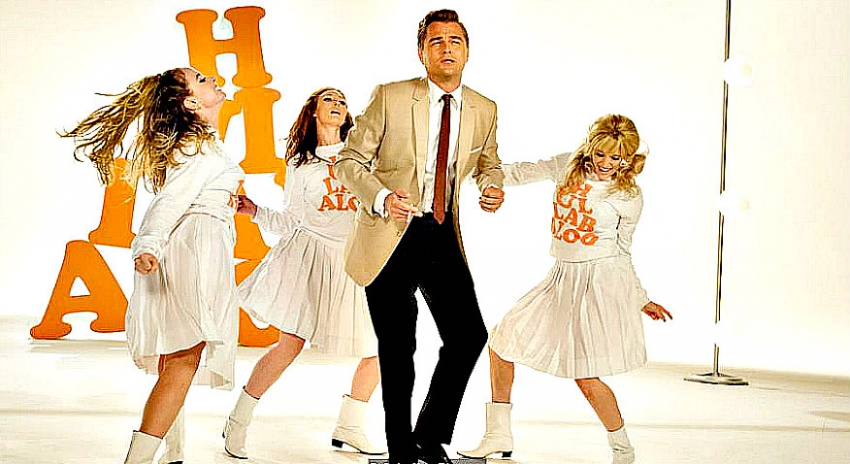 The bulk of the film is a fun and glitzy examination of Hollywood in 1969. It’s crammed with relics of the era (real and imagined):  cars, songs, TV shows, movie posters and trailers:  great fun for collectors and buffs. It’s also a fine view of a town in transition told principally through the career worries of a TV actor played by Leonardo DiCaprio. He feels washed up, tries the spaghetti western route that an agent (Al Pacino) suggests but comes home dissatisfied and tries to adjust to the new mood in American movies. DiCaprio’s acting in those scenes is terrific. 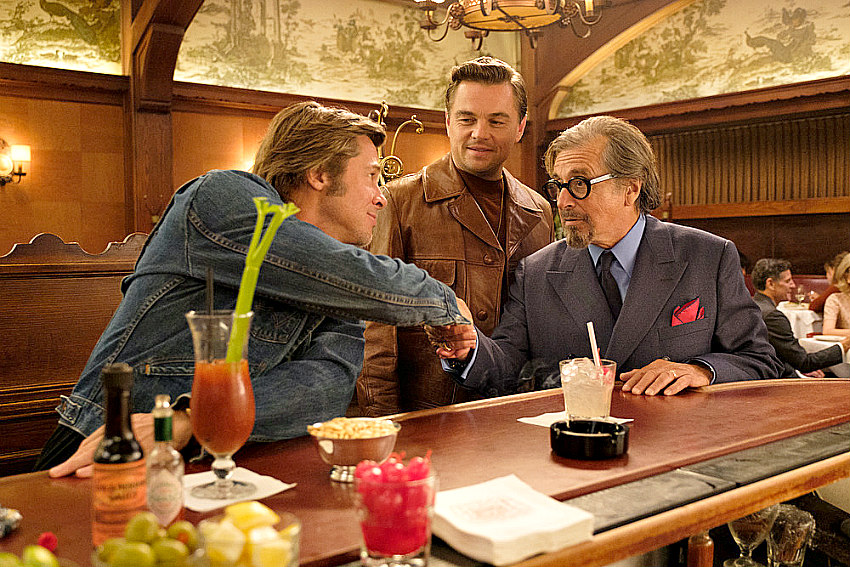 Brad Pitt plays his long-time pal and stunt double (and by recent necessity, driver). He’s a loyal friend, fills in more of the backlot drama (even punches out Bruce Lee in one sequence) and following some visual flirting with a hippie girl brings in the added story we’ve been primed to expect: the Manson murders. He meets the clan at the movie ranch they’re squatting at (Bruce Dern plays the cantankerous owner). Their most famous victim, Sharon Tate (played by Margot Robbie), just happens to live with Roman Polanski right next door to DiCaprio’s house. We all know what happened. That’s not what you get here, though. You do get a Tarantino blast of extended violence (be careful of that) but the facts are completely changed. He cheapens the memory by treating it as a lark. Surprising that, because the rest of the film is so authentic in scoping out the mythology of Tinseltown.  (Scotiabank, The Park, Marine Gateway and many suburban theatres)    3 out of 5

WATERGATE:  The subtitle says it exactly: “How we learned to stop an out-of-control president”.  That’s why this almost 50-year-old story is relevant again. The same issues that Mueller, Nunes, Nadler et al are tangling over now – executive privilege, presidential misconduct, dignity in the oval office—had us all glued to the news back then. Sam Ervin’s committee was on TV. There was “a cancer on the presidency,” John Dean testified. Could Nixon fight it off? It was must see television. This film is a thorough, detailed, exhaustive at times, retelling of the facts and it’s just as engrossing now. 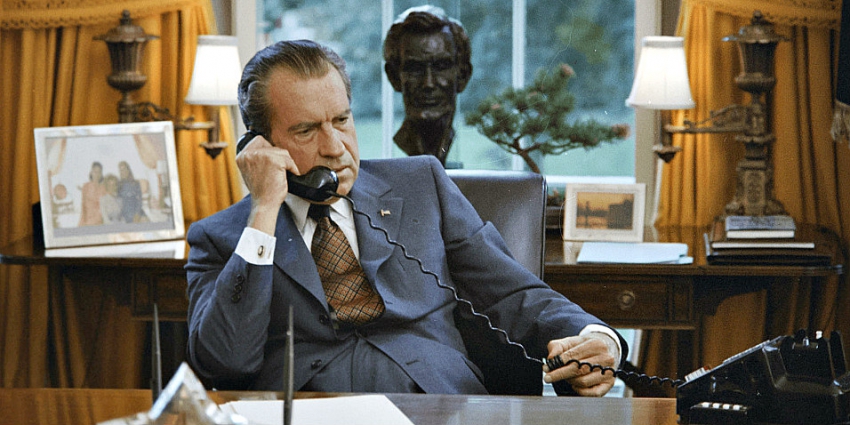 Charles Ferguson, Oscar-winner for a film on the 2008 financial crisis, has shaped a huge amount of information into this definitive history. It’s both a good backgrounder if you’re new to it and a good reminder, nostalgic even, if you you’re already versed in it. Through four hours and 20 minutes (shown with a one-hour intermission) we get all the news clips and TV excerpts we can absorb plus new interviews with many of the principal figures like Bernstein and Woodward, Daniel Ellsberg, John Dean, Pat Buchanan, Elizabeth Holtzman, Dan Rather (not Henry Kissinger, though). I was surprised at how much new I learned from them. Howard Baker really was a White House mole but he turned. Carl Bernstein recalls a threat from John Mitchell on the phone. Nixon railed about Jews in the media. And we get the tapes that eventually did him in. Key conversations from them are re-created by actors who manage to sound more like Nixon and his men than look like them.  But they bring the content alive. The  film leaves it to us to make the comparisons to today. (VanCity Theatre) 4 ½ out of 5

PROPAGANDA: THE ART OF SELLING LIES: It played twice at DOXA and it’s good to see it back even though I had a few quibbles with the film. It is lively, entirely engrossing, the topic is great but I think , Toronto filmmaker  Larry Weinstein has defined his subject a little too widely. As he describes it, almost anything can be propaganda if it’s trying to convince you of something. Ads, speeches, leaflets, sermons, etc.. Any of them, and not just those that lie or push a twisted message. All. 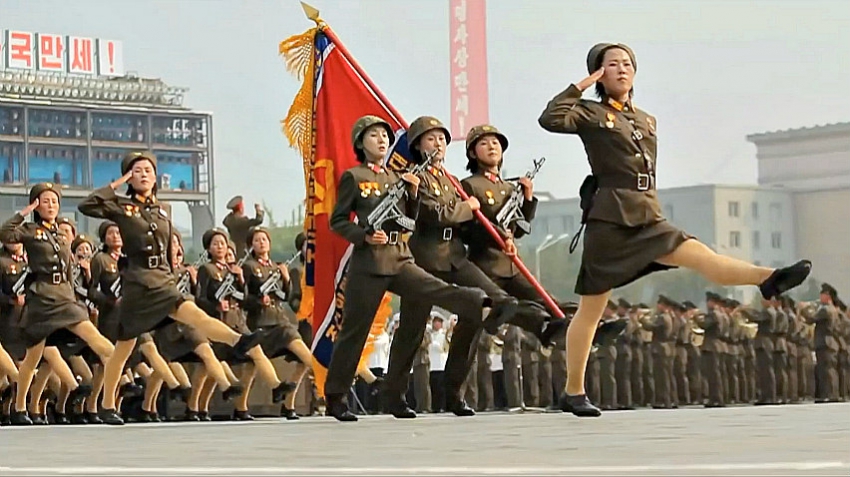