All this comes out in what is essentially an innovative documentary. Early on, in a surprise anachronism, he picks up the phone and talks to his mistress. They ride in a modern taxi together. There are more phone calls and some parts of the story are told in animation. Experts and musicologists talk too, as much about the dirt as the art. His fondness for donning pink silk dresses for instance. His anti-Semitism, which also gets a thorough airing when he’s lying in a bathtub griping his complaints. The result is an apparently correct and intriguing portrait of the musical giant. (VanCity Theatre) 3 ½ out of 5

WHEN JEWS WERE FUNNY: This film doesn’t suggest they aren’t funny anymore. Just different; not like the standup comics Alan Zweig used to watch on the Ed Sullivan show. The Toronto director says he recently rediscovered his own Jewishness and felt compelled to explore Jewish humor. Some of the old guys he has on camera, Shelly Berman, Jack Carter and Shecky Greene, don’t see anything uniquely Jewish, just comedians who happened to be Jewish. Younger guys like Howie Mandel, Mark Breslin and David Steinberg offer explanations: struggle incubates humor; Jews add a melancholy and testy tone. “We are the arguing people,” says Simon Rakoff.  The humor is still there; its only the quaint accent that’s gone. Seth Rogen might agree and I’ll repeat this suggestion: get on to U Tube, find Alan King’s great “survived by his wife” routine and laugh. The film has only 5 or six clips, far too few, of masters like King. At the Toronto Film Festival it was named best Canadian feature.  (VanCity Theatre) 3 out of 5

PERSONAL TAILOR: It’s only in one theatre but deserves more exposure. This is a Chinese comedy that is not only funny but also dares to be bitingly critical. Among its targets in modern China: obsession with money, corruption and a list of environmental offences including smog, clearcut forests, grasslands destroyed by coal mining and rivers polluted with sludge. Yeah, it’s also funny. The heavy message only comes at the very end, after a series of stories make you chuckle or, in the opener, gasp. Asian actors play Nazis in that one. A colonel menaces “Fraulein Jenny” when he’s not playing Bach on the piano. Turns out it, and all the stories, are fantasies staged by a company for people who want to test themselves. 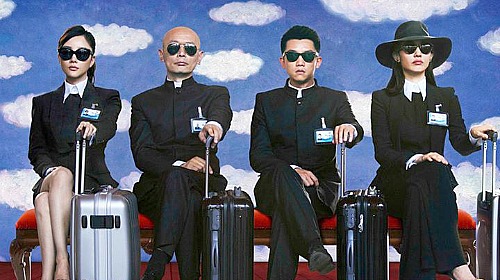 They let a chauffeur live as an honest politician for a day, a young woman as the daughter of a rich man and a poor woman as one of the super-rich. Most don’t react well. A producer of vulgar films who wants to create art suffers “high-culture shock.” An insider joke from director Feng Xiaogang who has a growing reputation and box office success built on wit and social criticism.  This film is a loose sequel to his Dream Factory from 1997 and his recent famine-themed Back to 1942 is China’s submission to the Academy Awards.  (Riverport) 3 out of 5

DHOOM 3: This is the one Bollywood fans will be flocking to. The action contingent anyway.  It’s the biggest film out of India this year and follows its blockbuster predecessors with much the same formula. Logic doesn’t matter. Just get beautiful people, songs and outrageous stunts on the screen. Last time, a snowboarder, towed by a train in the Namibian desert, managed to jump up on top while avoiding the bullets flying at him. This film, set in Chicago, promises even better stunts because they’ll be performed by Hollywood types. I haven’t seen it but the trailer is great fun. 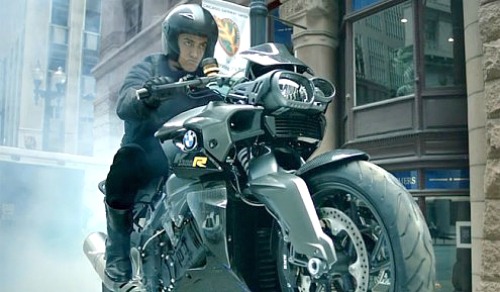 Superstar Aamir Khan joins the cast, along with Katrina Kaif, and fans will not only be able to see him race his motorcycle but also tap dance and perform circus gymnastics. He plays a thief who’s planning to rob the circus. Abhishek Bachchan and Uday Chopra once again play Indian police offers, who seem to have no international limits on their authority. Last time they chased a thief in Rio, amid all the carnival color of course.  (Riverport and Strawberry Hill theatres)

NOTE: All movie stills in this posting were supplied by the producers. They are the exclusive property of their copyright owners.