ANCHORMAN 2: THE LEGEND CONTINUES:  Don’t get your hopes up too high. Yes, it’s funny. That’s as it should be. But the jokes are hit and miss, as if we’ve been given highlights from a massive improv session. And as for the much-vaunted satirical jabs at the modern news business, they’ve been said many times before. If you haven’t encountered them yet there’s much you can think about: some news outlets pander to their audience; deliver sensation and trivia and forgo investigative journalism. I suspect that’s not what you’re looking for, though. You want, and get, more of Will Ferrell’s dim-witted but well-meaning news reader with the impeccable salon-quality hair and the quotable one-liners. 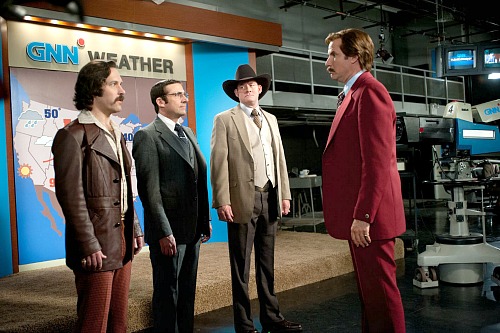 His first movie was set in the 1970s and, after a slow start but a second life on video, became a cult hit. Now in 1980, he gets fired (by Harrison Ford), takes a stint as an abusive announcer at a seaworld park and then is offered revival. A new venture, a 24-hours news channel has a job for him, on the graveyard shift. He rounds up his old team (Paul Rudd, Steve Carell, David Koechner), challenges the station’s star (James Marsden) to a ratings contest and proceeds to re-make TV news. His plan:  let’s tell people what they want to hear and instead of what’s wrong with America, give them what’s right. Eventually the film resorts to that most hoary of plot turns: will he get to his son’s piano recital or be occupied with a breaking news story? And will it be substantial or yet another highway car chase? There are some questionable jokes about blacks and at the end a head-spinning series of celebrity cameos, at least one of which will astound you.  (Scotiabank, Rio on Broadway and many suburban theatres) 3 out of 5

WALKING WITH DINOSAURS 3D:  “For the first time in history, audiences will truly see and feel what it was like when dinosaurs ruled the Earth.” That’s the hype, not quite the reality though in this adventure tale with educational moments aimed at kids. My sense is they’ll like it, just like they devour films like The Land Before Time.  This one is visually realistic, an off shoot from a BBC series. The detail on these computer generated creatures is remarkable. Whenever a new one arrives, the picture freezes and we’re told its name and what it eats. I hadn’t heard of the Edmontosaurus before. At one point, there’s a lengthy info session complete with a chart and animated graphics.

Most of the film though is a less-than-novel adventure. A runt-of-the-litter dinosaur (voiced by Justin Long) grows up competing with a brother (Skyler Stone) and developing romantic feelings for Juniper (Tiya Sircar), from another Pachyrhinosaurus herd. His progression to maturity is accompanied by a comic side-kick, a parrot voiced in a hip Latino accent by John Leguizamo. Yes, all the characters speak, some in a smart-alecky tone. The effect is to turn a science lesson into a cartoon. A visually stunning one, though. Check out the dark woods, the northern lights (the story is set in Alaska), the dinosaur migrations and the head-butting fight.  (International Village and some suburban theatres) 2 ½ out of 5

THE WAGNER FILES: At VIFF this year, the film Ludwig II showed us the young king’s enthusiasm for art, music and progressive politics as he found them in Richard Wagner. The actor who played the valet, Samuel Finzi, plays Wagner himself in this considerably different take on the great composer. His music and passion for life are celebrated as they should be. His life is exposed though. He was an insolvent, frequently on the run from his competitors, a con man who fleeced Ludwig, and a cheat who slept with his best friend’s wife and had four children with her before he married her. She became his manager. 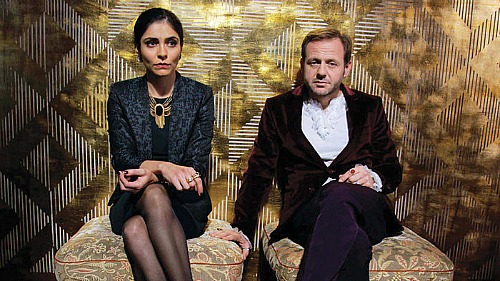