Tom Hiddleston, first seen roasting a dog (we later learn why) plays a medical professor (we see him carve up a cadaver’s head) and, if you’re still in your seat, you’ll see him move into a new apartment building that an architect played by Jeremy Irons has envisioned as a progressive development. Huh? Sure there are shops, cafes and other amenities. But the class structure is unchanged. The super rich live at the top, the less well-off below, and the poorer ones below that. Irons is at the every top. His wife has a horse to ride up there and complains that the poor are always obsessed with the money they don’t have. So what happens when the elevator breaks down and the power and other amenities fail? Anarchy. Orgies. Violence. Depravity. Rebellion. People only looking out for themselves.  It’s funny to a point. Then it gets too much. We Get It. We Get it. But there’s more. Visionary filmmaking, it’s been called. Excessive, I say. (VanCity) 2 ½ out of 5

THE MAN WHO KNEW INFINITY:  Imagine this, a feel-good film about mathematics. And with hints of racism, colonialism and elitism too. Writer-director Matthew Brown brings them forth so gently that nothing grates too harshly. You might wonder how true it is, but you’ll probably enjoy it as a first introduction. There’s just enough about math in it to feel authentic while the main focus is on two men. 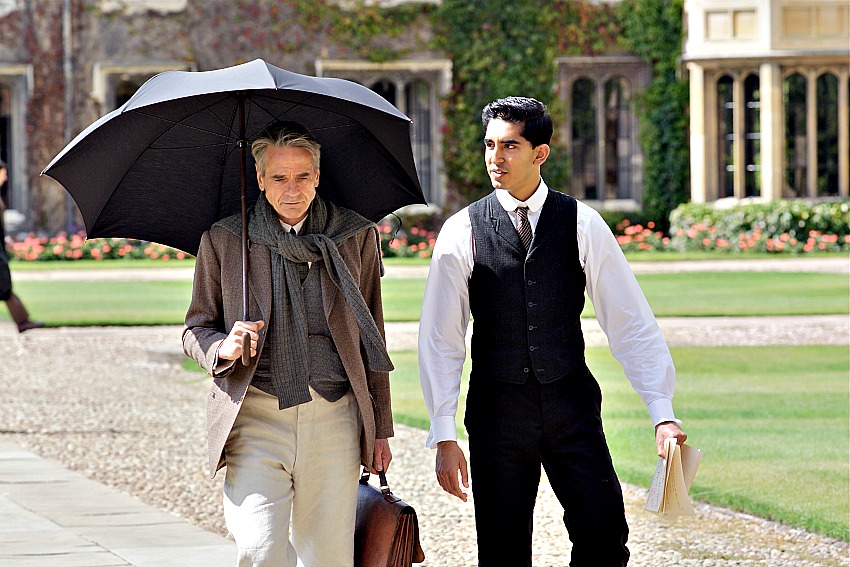 Jeremy Irons (much more noble than in High-Rise) plays a Cambridge professor who in 1914 brought a young amateur mathematician from India, S. Ramanujan, played by Dev Patel, to England and worked with him to develop his theories. He demands proof for every theorem, not just intuition. Bertrand Russell, played by Jeremy Northam says “Let him run. Don’t stifle him.” But theories that arrive in dreams from a god can’t be published. Much of the film contrasts the two academic styles. Problems with others at the university boil up but they’re not so much about racism but that Ramanujan was untrained and had no degree. All of this is conveyed with good acting, good locations including for the first time Trinity College at Cambridge but a rather mild script. The two endings that follow are consequently not as tear inducing as intended. (5th Avenue, International Village) 3 out of 5

The new films I haven’t seen …

NEIGHBORS 2: SORORITY RISING: Sorry Seth Rogen I didn’t get to your latest movie yet. I know the first was a huge hit, the highest-grossing original comedy of 2014. But the preview for this one conflicted with another. Hope you do well though with what most reviewers seem to feel is pretty well a repeat of the first, not only in the basic story line, but with many of the jokes. You and Rose Byrne, playing your wife, had a loud-partying fraternity move in next door just as you were expecting your first child. You won out over them. Now, expecting a second child, you get a sorority moved in because they’re not allowed to party on campus. One of the frat boys comes along to mentor them, and apparently later switches sides to help you out. No matter. The core group of actors is reassembled. Reviews range all the way from super-high to oh so-low. (Scotiabank, Marine Gateway)

LEAGUE OF EXOTIQUE DANCERS: Many people have given this Canadian-made film high marks (e.g. 4 out of 4, said the Globe and Mail) for its amusing and informative visit with a group of former strippers. Director Rama Rau found them at a burlesque hall of fame in Las Vegas, now in their 60s and 70s, full of stories and proud of what they used to do. Their era was long before lap dancing and porn took over. They saw their work as a form of female empowerment. Iffy? Rau says  they’re “some of the strongest and most interesting women I've met.” Sounds like a good bet.  (Rio Theatre, Fri, Sun and Monday)

MEN & CHICKEN: This Danish film with Mads Mikkelsen is described as an  “outrageous, philosophical farce  (that) crosses Hamlet with The Island of Dr Moreau … a wildly unorthodox comedy which couches some deep thinking about genetics, nature vs nurture, and bestial behaviour in slapstick pratfalls, dumb and dumber jokes, and good old fashioned sibling rivalry.” Oh, and it’s extremely funny, for certain people. Mads and a brother search out their real father and find three creepy brothers to boot, acting vile in a sanitarium. The director, Anders Thomas Jensen, has had Oscar nominations for three short films and won once.

Friday’s show will be preceded by a Paul Thomas Andersonfilm, Radiohead's Daydreaming in its original 35mm form. It’s a 6-minute video for the band’s new single.